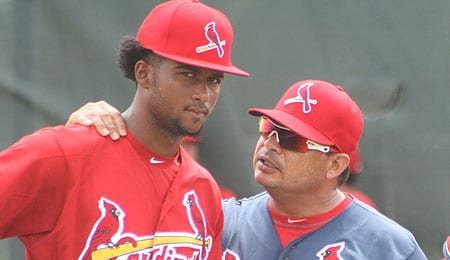 Welcome back to another week of Fantasy baseball. Happy Father’s Day to all our readers that have sired young pups!

This week, the Reds unveiled a new statue of Pete Rose; the Twins wasted little time in getting No. 1 overall pick Royce Lewis signed; and Victor Martinez (heart) has been released from the hospital.

Sandy Alcantara, SP, St. Louis Cardinals (ESPN: NA; CBS: 3 per cent): Dominican righty Alcantara has really only been known to Dynasty league owners before this season, but he’s shown an ability to be unhittable — as well as wild. He’s generally struggled to adjust to Double-A (you better not dig in to the batter’s box when facing him), but the Cards have shown a propensity in recent years for taking high ceiling starting pitching prospects and throwing them right into the bigs as relievers. So while Alcantara (and his overpowering heater — see video below) remains mostly a keeper league option, don’t be shocked if he winds up providing some value this year — especially now that he’s looking much sharper this month. Of course, the possibility also exists that he gets packaged up in a deal as St. Louis look to upgrade its infield.

Francisco Rodriguez, RP, Detroit Tigers (ESPN: 18.3 per cent; CBS: 25 per cent): Slowly but surely, K-Rod is working his way back into relevance, having now tossed shutout ball in six of his last seven outings. He’s not exactly gaining Manager Brad Ausmus’s trust in high-leverage situations yet, and the frustration is already showing for the fiery reliever. But there’s no doubt that Rodriguez, currently fourth all-time in saves, still has something left, so don’t be shocked if he carves out value for himself before this season is up.

Derek Fisher, OF, Houston Astros (ESPN: 15.5 per cent; CBS: 37 per cent): Fisher has been kicking ass at Triple-A, finally getting the call to the majors when Josh Reddick (concussion) landed on the DL. Fisher wasted no time showing his power, going yard in his MLB debut, and then flashing his speed, with a steal in Game No. 2. He’s averaging a walk per game already, showing yet another of his skills. Fisher may very well have shown enough to stick in Houston even after Reddick returns, but PT may be an issue, so see how this plays out.

Matt Chapman, 3B, Oakland Athletics (ESPN: 2.9 per cent; CBS: 12 per cent): Another top prospect that’s recently gotten the call, Chapman’s arrival has coincided with the A’s starting to heat up, and yes, these two events are clearly connected. He drew two walks and scored a run in his debut, got a hit and three RBI in his second game and then had two hits, including his first double, and a run in Game No. 3. Chapman is another one that looks here to stay.

Chad Green, RP/SP, New York Yankees (ESPN: 3.5 per cent; CBS: 4 per cent): With CC Sabathia on the DL, Green has moved into the rotation, where he spent most of his time while with the Yanks last season. He’s generally been brilliant as the long man this year, but has had a bit of trouble lately, and didn’t exactly last long in his first start on Thursday. What intrigues us is how unhittable Green has been this year. If he can come close to duplicating that in the rotation, he’ll be a fine addition.

Steve Pearce, OF, Toronto Blue Jays (ESPN: 1 per cent; CBS: 5 per cent): Pearce (calf) came off the DL Friday and immediately went yard. He’s no spring chicken, and despite his power being in regression, he’ll still provide you with some dingers.

James Shields, SP, Chicago White Sox (ESPN: 16.9 per cent; CBS: 26 per cent): Another veteran returning from the DL, Shields will trade spots with Miguel Gonzalez, who is finally hitting the DL with a shoulder woe. Shields was dealing with some serious wildness before getting hurt, so his early success was likely very fortunate (an unsustainable .150 BABIP suggests as much). Still, we all know he’s a capable hurler when healthy and is eager to put last year’s nightmare behind him, so you better grab him while you can.

Royce Lewis, SS, Minnesota Twins (ESPN: NA; CBS: 1 per cent): The future has begun as Lewis, the No. 1 overall pick in last week’s draft, has been signed by the Twins to the largest deal ever for a high schooler. The California native will be assigned to the GCL to begin his career, and has a chance to be a major base stealing threat down the road. Dynasty league owners better be all over this guy now.

Yonny Chirinos, SP, Tampa Bay Rays (ESPN: NA; CBS: NA): Chirinos hasn’t exactly dominated lately, but we like that his K/9 is up since moving to Triple-A, and believe he’s simply getting lost in the strong group of pitching prospects the Rays boast.

Brendan McKay, 1B, Tampa Bay Rays (ESPN: NA: CBS: 1 per cent): We’re going to have to wait for McKay to begin his pro career as he’s currently still tearing it up in the College World Series, but he was the best college player available in the draft for a reason, so Dynasty League owners must get to know him well.

By RotoRob
Tags: Sandy Alcantara
This entry was posted on Sunday, June 18th, 2017 at 8:25 pm and is filed under BASEBALL, RotoRob, The Wire Troll. You can follow any responses to this entry through the RSS 2.0 feed. Both comments and pings are currently closed.