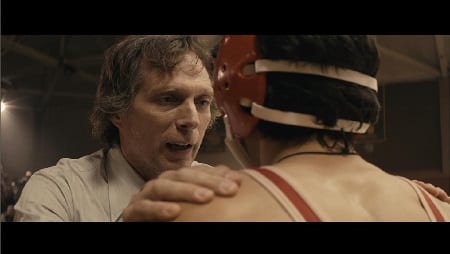 When it comes to wrestling, we’re partial to the “professional” variety in which chair shots and leg drops rule and headlocks and takedowns precede chants of “boring.” That being said, American Wrestler: The Wizard piqued our interest with a trailer that promised an unusual back drop and underdog story. Now it’s time to find out what The Wizard really brings to the mat.

Back in 1980, Iran took 52 Americans hostage and ended up holding them for more than a year — an event that preceded the election of Ronald Reagan, who saw the hostages freed on the same day he was sworn into office as President. With his home country in turmoil, Ali Jahani (George Kosturos) is smuggled out of Iran by his parents and sent to live with his uncle in Petaluma.

Ali arrives to find plenty of anti-Iranian sentiment in the northern California town, adding to the already difficult task of integrating into a new school. Even worse, Ali’s uncle Hafez (Ali Afshar) is anything but welcoming to his nephew. With his own business struggling in light of the Iran hostage situation, Hafez quickly informs Ali he’ll need to move out and return to Iran.

Hafez’s stance softens when he sees that Ali has made the wrestling team, led by Vietnam veteran turned pacifist Coach Plyler (William Fichtner). Despite the objections of Principal Skinner (Jon Voight), who fears for the boy’s safety in the current environment, Plyler and Hafez push Ali onward, and when Ali proves to be a capable wrestler his future prospects start to change dramatically.

Although this was clearly filmed on a budget, the semi-biographical flick does a good job of creating a believable 1980. It’s shot on location in Petaluma and at the various real-life gyms where these meets took place under the watchful eye of Ashfar, who plays the uncle but is actually the person the story is about — though a fair amount has been changed via poetic license.

Veteran hands Fichtner and Voight add some legitimacy to an otherwise anonymous cast with subtle yet effective performances. Of the two, Fichtner is given more to do, becoming a nurturing force for Ali in the boy’s unexpected rise to the top of his weight class. Kosturos shines the brightest among the new faces, bringing a physicality and toughness that prevents it from being a straight nerd-to-jock story.

We’re no experts on the intricacies of amateur wrestling, but what’s there seems mostly authentic looking with only a few flashy moves tossed in for effect. The ending is pure Hollywood, though, which goes against the relative realism to that point.

It’s difficult to not see The Karate Kid when watching American Wrestler. Like, very difficult. Ali is the new kid in town that runs afoul of the school’s bullies. Plyler is the kindly war veteran that takes him under his wing and teaches him. Kristi (Lia Marie Johnson) is the popular girl that falls for the new kid, enraging all the jocks even more in the process…

…And then there’s Rowan Knox, who is basically Johnny from the Cobra Kai mixed with Karate Kid 3‘s Mike Barnes (AKA, the tough asshole waiting to fight him). Played by Kevin Schmidt, Knox is just an unrepentant jackass. He breaks a wrestler’s arm early on, is shown to be a privileged douche on a full ride to Stanford and then says he’ll break Ali’s neck in a locker room confrontation. It’s way too much.

Speaking of too much, there’s too much waffling from characters. In the span of minutes, Hafez goes from sending Ali back to Iran to dedicating all his free time to training him. Similarly, the Principal tells Ali to live with his actions and not complain (based on an incident) only to do a complete 180 following a short story. It’s lazy writing and manufactured drama.

Nowhere does the movie’s limited budget feel more pronounced than in the bonus features, which just seem like they were produced in one take — you couldn’t have reshot it when Voight is sitting there coughing? There are a few interesting tidbits to be found, mostly about using Afshar’s old friends and coaches that characters are based on in small roles, but it’s mostly uninspired.

There are interesting elements at work in American Wrestler: The Wizard, but as the characters and story beats continue to mirror Karate Kid it becomes increasingly distracting.

By HC Green
Tags: American Wrestler: The Wizard, Blu-ray reviews, Movie Review, William Fichtner
This entry was posted on Thursday, June 1st, 2017 at 4:54 am and is filed under Herija Green, Movie Reviews. You can follow any responses to this entry through the RSS 2.0 feed. You can skip to the end and leave a response. Pinging is currently not allowed.