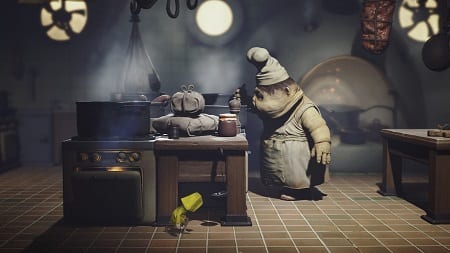 The chefs are the game’s most unsettling inhabitants.

It doesn’t take long for Little Nightmares, the latest from LittleBigPlanet 3 developer Tarsier Studios, to evoke thoughts of Playdead’s sullen masterworks Limbo and Inside. Can it sustain the wall-to-wall excellence of its spiritual predecessors? There’s only one way to find out.

While Little Nightmares is a mostly left-to-right experience, the rooms do have depth that allows you to move up and down as well. It’s here that the game runs into trouble as it’s often difficult to gauge how lined up you really are with narrow objects you’re meant to walk across.

It’s isn’t ruinous, but it is damn frustrating when you fall off the side of a narrow beam for the fifth time, leading to death and a reloaded checkpoint. Granted, having a fixed camera certainly adds to the creepiness factor; it just would’ve been nice if Tarsier found a better workaround for lining up jumps and keeping Six from falling — perhaps automatically stopping you at an edge and requiring an addition tap in that direction to dismount?

Another somewhat odd choice is requiring you to keep buttons pressed down to continue holding onto and/or climbing objects. It doesn’t really add any difficulty, but it feels a bit foreign compared to most modern games when once you’ve latched on you’re not letting go until you press another button.

Most of the game is spent solving puzzles, and it only asks you to be precise and decisive a handful of times throughout. We were tripped up a fair amount during those sequences, but those struggles were anticipated and almost always preceded by a checkpoint so that you never lose significant progress — even a prolonged “escape” is segmented to cover multiple checkpoints for your convenience.

Creepy, distinctive and impeccably designed, Little Nightmares is visually arresting from the moment Six awakens until the credits role. It isn’t frightening in the same way as Outlast, but it creates a very unsettling vibe with its dark and dingy settings and grotesque inhabitants. Most of the dynamic elements (such as a creature lunging for you) are scripted, and those lose their effectiveness, but it’s still exceedingly well done.

Music takes a back seat here, but when it’s called upon it does its job well. The sound effects are first rate as well, particularly the chilling screech of the chefs when they spot you. It’s easily the scariest moment in the game.

As usual with Playdead’s titles, Little Nightmares drops you into a strange land, prods you forward and lets you fill in the blanks from there with very little in the form of concrete details or narrative. What we do know is that you play as Six, a young girl that finds herself trapped in some sort of hellish place from which she must escape.

Even without traditional narrative beats, the game proves compelling as it tosses various environmental puzzles at you, challenging you to overcome a mix of problem solving and evading capture from a series of grotesque creatures (humans?). While rather short, the game is fresh from beginning to end and some of the freakier moments are sure to linger with you after you’ve finished.

There’s an ongoing theme of hunger — the creatures want to eat you, and periodically your character will become weak and have to feed — but it’s never used as a gameplay mechanic. Instead the times when you’ll double over famished are scripted and almost immediately remedied. It feels like a lost opportunity and something that would’ve served to differentiate it.

Inconsistent checkpoints are probably the most frustrating aspect of Little Nightmares as, at times, you end up replaying decent-sized chunks before reaching the part that gave you trouble. Usually that ends up being falling off an edge or missing a jump because of an odd camera angle, which makes it all the more annoying.

While the game lasts roughly 2-to-3 hours, there are some collectables that could lure another playthrough out of you, though we don’t think that’s needed to get your money’s worth thanks to the quality of what’s there. It’s the best kind of derivative, borrowing some concepts and making them its own while introducing plenty of new stuff along the way.

Little Nightmares is an unsettling trip through a dark, menacing world that compels you to keep pushing forward through its clever puzzles and jump scares. If you enjoyed the likes of Inside and Limbo it’s hard to imagine you won’t have a blast here.

By Herija Green
Tags: Bandai Namco, Little Nightmares, LittleBigPlanet 3, Playdead, Tarsier Studios, Video Game Reviews
This entry was posted on Tuesday, May 30th, 2017 at 7:30 pm and is filed under Herija Green, Video Game Reviews. You can follow any responses to this entry through the RSS 2.0 feed. Both comments and pings are currently closed.