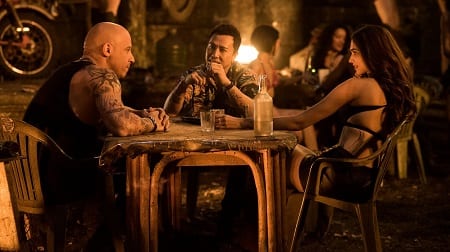 I am one with the Force, the Force is one with me…

While you can certainly question aspects of Vin Diesel‘s acting prowess, you cannot dispute that he has a talent for getting entrenched in successful franchises: Fast and Furious, Guardians of the Galaxy and, to a lesser extent, The Chronicles of Riddick.

Years after faking his own death, Xander Cage (Diesel) is approached by the CIA’s Jane Marke (Toni Collette) in an effort to bring him back into the fold. When Cage initially refuses, Marke informs him that the man that recruited him, Gibbons (Samuel L. Jackson), was killed when a satellite crashed near his location. The lone device capable of such action, known as Pandora’s Box, was stolen by a team of highly skilled operatives, and only Cage can bring them down.

Despite their common background, the two crews find themselves on opposite sides of the issue, with Cage wanting to take the box and return it to Marke, and Xiang looking to keep control of the box to prevent its exploitation. Faced with an equally skilled opponent, Cage must figure out a way to get the device while also determining whether or not Xiang was truly behind the attack on Gibbons.

Action, action and more action. While the original movie cast Diesel in a semi-clandestine undercover role, the sequel tosses that aside and turns Cage and company into an ass-kicking ensemble. Again, much of the action is over the top and unrealistic with a ragtag group of “not soldiers” easily mowing down dozens of trained agents, but whatever. It’s stylistically enjoyable.

For better or worse, Return of Xander Cage feels a lot like a co-ed The Expendables. There’s the brawny lead, Tony Jaa (and Yen) in the Jet Li martial arts role, an MMA fighter Michael Bisping in for Randy Couture and so on. By the end it feels like director D.J. Caruso was trying to position the franchise as a younger, more “extreme” Expendables. We like those films, though, so we’re OK with it.

When the film embraces its place as a fun popcorn movie, its uninspired dialogue and recycled story tropes don’t really matter. When it tries to adopt a more serious, sombre tone, it simply doesn’t work and only serves to transport you to a place where you start questioning what you were enjoying about the movie to begin with.

Although most of the characters and performances are endearing on some level, Nina Dobrev is brutal. She plays the plucky nerdy tech girl to the hilt, and it’s just too much.

A superficial set of extras await, most of which feel like promotional materials. Probably the best of the bunch is “I Live for This Sh#t!,” a 15-minute look at the film’s stunts and action sequences. The Rebels featurette introduces the cast.

It’s interesting for some of the foreign stars that are largely unknowns here, but it’s weird that well-known domestic roles, like McCann in GoT and Yen in Rogue One, go completely ignored. Like most “gag reels,” this is a waste of time.