The Wire Troll: Cards Have Star on the Way in Oscar Mercado 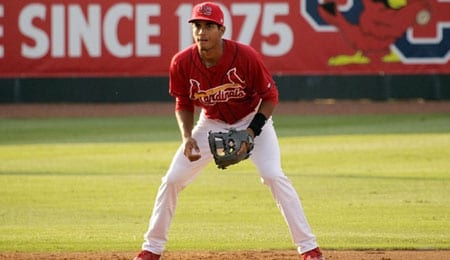 Oscar Mercado could force his way to the bigs soon. (The Redbird Daily)

Welcome back to another week of Fantasy baseball waiver wire recommendations. We’re into mid-May now, so very soon you’ll have a good idea of how realistic your championship hopes are for 2017. In the meantime, work that wire!

This week, David Ortiz’s new autobiography included some choice words about former Red Sox Manager Bobby Valentine; Ryan Braun continues to fall apart physically and has hit the DL with a calf strain; and Mets closer Jeurys Familia has an arterial clot in his shoulder and could need surgery, so it’s time to seek other save options if you own him (Justin Wilson, anyone?).

And now onto this week’s Fantasy baseball waiver wire picks…

Oscar Mercado, OF, St. Louis Cardinals (ESPN: NA; CBS: unowned): We’re going to start this week off with a keeper league option, but one that could possibly force his way to the majors later this season. Mercado, the Cards’ second rounder in 2013, had put together extended hitting and on-base streaks until cooling a tad recently. This is a guy that struggled to hit for average at High-A last year, yet is making it look easy at Double-A, compling a very productive season so far. Heading into this season, Mercado looked like he’d top out as a utility guy given his average bat speed, but so far this year, he seems to have figured something out. If it’s for real, he needs to be tracked, especially with his sweet line drive stroke (see video below).

Braxton Garrett, SP, Miami Marlins (ESPN: NA; CBS: 6 per cent): Miami’s first round pick from last year finally made his pro debut last week, tossing 4 2/3 shutout frames at Low A. Garrett definitely got a bit lucky with the goose egg given the control issues, but overall, it was worth the wait. Keeper league owners need to have this dude on their radar.

Josh Reddick, OF, Houston Astros (ESPN: 16.8 per cent; CBS: 36 per cent): Reddick is seeing plenty of action in the Astro outfield and he continues to show solid extra-base pop. He’s hit safely in eight of the last nine games, averaging a ribbie per game over the last eight. If you need a stick, give Reddick some serious consideration.

Derek Fisher, OF, Houston Astros (ESPN: 0.2 per cent; CBS: 5 per cent): While we’re talking about the Houston outfield, Fisher is making a strong case to work his way into the big league mix very soon. He’s absolutely tearing it up at Triple-A right now, hitting safely in 16 straight games to jack his BA up to .336. Fisher has tremendous patience, sporting a .400 OBP, and also has very fine speed, although his work on the basepaths has been a black mark for him so far this season. He’s a fine keeper league asset, and could very well help Fantasy owners this season.

Ben Gamel, OF, Seattle Mariners (ESPN: 14.5 per cent; CBS: 23 per cent): There’s plenty of flyhawk options this week, isn’t there? Gamel is smacking the ball right, currently sporting a 40 per cent hard hit rate without a single infield fly. His extra-base sock has never looked this impressive while he’s managed to improve his contact rate. That’s a very good sign that this youngster has figured something out.

Albert Abreu, SP, New York Yankees (ESPN: NA; CBS: 2 per cent): A highly projectable pitcher, Abreu has a nice repertoire of pitches in his toolkit, and after a dominant start at Class-A, he was quickly promoted to High-A, where he had one great start and then one poor one. We really like his chances of turning into a decent No. 3 starter down the road, so think about plucking this youngster up in Dynasty formats.

Colby Rasmus, OF, Tampa Bay Rays (ESPN: 4.1 per cent; CBS: 6 per cent): Rasmus has not only revitalized his career in Tampa Bay, he’s updated his musical tastes, too, employing a Yelawolf track as his walk-up song. He hit safely in five straight games last week, producing three homers and eight RBI along the way. Rasmus is even walking significantly more often than he ever has before. He looks worth taking a flier on.

Martin Maldonado, C, Los Angeles Angels (ESPN: 1.9 per cent; CBS: 7 per cent): Maldonado isn’t exactly dripping with skills, but he’s a decent contact hitter that has shown the ability to produce moderately well in limited PT. He’s hitting better than he ever has before, so if you need to dig deep in an AL-only or two-catcher league, he’s a solid option.

Chris Heston, SP, Seattle Mariners (ESPN: unowned; CBS: 1 per cent): The Mariner rotation is decimated and they keep dropping like flies. Could Heston be next in line for a callup from Triple-A? He certainly saved the Giants’ bacon two years ago, so keep an eye on this situation.

Corey Knebel, RP, Milwaukee Brewers (ESPN: 21.2 per cent; CBS: 35 per cent): After Neftali Feliz flamed out, Knebel has taken over as the closer in Milwaukee. A compensation pick by Detroit in 2013, Knebel has been unhittable this year, so could really take this job and run with it.

Ian Happ, 2B, Chicago Cubs (ESPN: 13.2 per cent; CBS: 40 per cent): In his MLB debut Saturday, Happ picked up right where he left off in Spring Training — homering and driving in a pair. He’s filling in at second base and in the outfield while the Cubs battle injuries in their starting lineup. This is a great short-term addition.

Tommy Pham, OF, St. Louis Cardinals (ESPN: 16.5 per cent; CBS: 12 per cent): Pham has driven in eight runs over his last 10 games. Just recalled to the Show a week and a half ago, he’s hitting like he doesn’t want to leave, so give him a serious look.

By RotoRob
Tags: Oscar Mercado, St. Louis Cardinals
This entry was posted on Sunday, May 14th, 2017 at 9:10 pm and is filed under BASEBALL, RotoRob, The Wire Troll. You can follow any responses to this entry through the RSS 2.0 feed. Both comments and pings are currently closed.