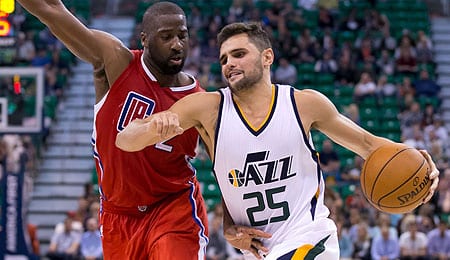 Welcome back to another week of Fantasy basketball. We’re about a month of way from seeing your first round picks put on a show in the annual and highly anticipated NBA All-Star Weekend.

This week, Penny Hardaway has been inducted into Magic Hall of Fame (about time); rumour has it if Chris Bosh is healthy enough to play next season, the Bulls want first dibs (which is apparently “news” to Dwyane Wade); and Russell Westbrook — a guy who is averaging a triple-double, didn’t earn a starting spot in the Western Conference All-Star lineup, making him perhaps the most snubbed player in NBA history.

Iman Shumpert, SG, Cleveland Cavaliers (ESPN: 4.2 per cent; CBS: 7 per cent): Shumpert has been inserted into the starting lineup and is playing nicely as of late. He’s now scored double-digits in his last three contests, averaging a pair of steals and burying a bunch of threes as well. With teammate J.R. Smith (thumb) out indefinitely, Shumpert is a perfect widely available shooting guard to take advantage of.

Raymond Felton, PG, Los Angeles Clippers (ESPN: 20.3 per cent; CBS: 49 per cent): With teammate Chris Paul out the lineup for a couple of weeks, veteran Felton has been given the chance to play alongside the youngings again. Right away, Felton has facilitated great passing, matching his season high on assists, even notching his third double-digit scoring effort. Don’t snub this guy, so consider giving him a spot on your roster especially if you need a scoreboard-filling point guard that can drop in a prayer every now and then (see video below).

Mindaugas Kuzminskas, SF, New York Knicks (ESPN: 5.7 per cent; CBS: 10 per cent): Kuzminskas is trying to take advantage of extra PT in place of another hard-to-pronounce-and-spell-his-named player — Kristaps Porzingis (Achilles). With scoring numbers like 17 and 13 in his last four, it’s clear Kuzminskas can get the ball in the hoop when given the chance. Porzingis may return soon, so perhaps you should exploit Kuzminskas’ current and heavier role for the time being.

David Lee, PF/C, San Antonio Spurs (ESPN: 8.9 per cent; CBS: 29 per cent): Every now and then, Lee proves he’s still got game. Remember his return engagement to Boston in late November when we went off for 15 and 12 in just 18 minutes? Well, with Pau Gasol (broken finger) out, Lee started Thursday and put up another double-double while adding a couple of assists, a block and a steal. It’s unclear if he’ll continue to start while Gasol is out, but he should definitely be in line for enough PT to be worth grabbing.

Kelly Olynyk, Boston Celtics (ESPN: 7.8 per cent; CBS: 35 per cent): Olynyk took a step backward last season as he dealt with a shoulder woe that ultimately required surgery, and this season he’s slipped even further despite the fact he’s starting a bit more often and seeing slightly more PT. However, in recent games the Canadian big showed some serious signs of life, shooting the lights out last weekend for 26 points and then following that up with a 15-point, nine-rebound effort on Monday. In his most recent game, Olynyk was mostly stapled to the bench, which highlights the difficulties of using players that only start periodically, but productive centres are tough to find, so if you can ride out the duds, give him a look.

Willy Hernangomez, New York Knicks (ESPN: 1.3 per cent; CBS: 9 per cent): Hernangomez notched a double-double in points and rebounds in just 19 minutes during a win over Boston. It’s unclear what his role might be moving forward, but the Wire Troll just can’t overlook double-double performances. He’s so widely available that ESPN doesn’t even have a profile picture for him yet.

By Adrian Wallace
Tags: Cleveland Cavaliers, Iman Shumpert
This entry was posted on Saturday, January 21st, 2017 at 1:51 pm and is filed under Adrian Wallace, BASKETBALL, The Wire Troll. You can follow any responses to this entry through the RSS 2.0 feed. Both comments and pings are currently closed.