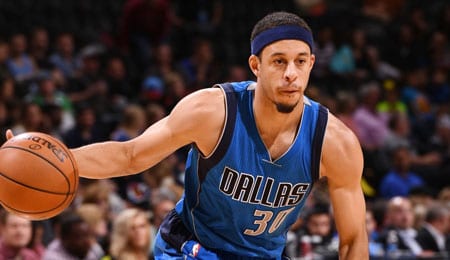 This week, John Wall and Jae Crowder worked out their differences during a post-game encounter and got fined (after Wall love-tapped Crowder’s face); Isaiah Thomas dismissed his teammates timeout call and went on to hit a buzzer-beater against the Hawks; and Zaza Pachulia has risen to second among Western Conference frontcourt players in All-Star voting, ahead of Kawhi Leonard (yes, we did say Zaza Pachulia).

Seems like the Irish of the NBA have been busy making headlines this week. Now it’s time to make some of your own in your respected leagues with some new roster juice…

Seth Curry, PG, Dallas Mavericks (ESPN: 8.6 per cent; CBS: 31 per cent): The injury to teammate Andrew Bogut (foot) shifted the Mavs’ rotation and landed Curry into a starting spot against the Suns Thursday. Curry put up 12 points, four rebounds, three steals, an assist and a block and seems comfortable playing a two-man game with Dirk Nowitzki (see video below). Even off the bench, Curry’s been scoring well in the last couple weeks. Grab him if you’re in need of a guard, or if you simply dream of having a guard whose last name is Curry.

Allen Crabbe, SG, Portland Trail Blazers (ESPN: 17.1 per cent; CBS: 31 per cent): Crabbe returned to the starting lineup Friday in the absence of teammate Maurice Harkless (tardiness). It wasn’t the best output for the usual scorer Crabbe, but you should keep tabs on him in the event that Harkless continues to show up late.

Joe Harris, SF, Brooklyn Nets (ESPN: 0.6 per cent; CBS: 2 per cent): With teammate Jeremy Lin (hamstring) out, this might be your chance to make an early second-half of the season investment in Harris, especially with his minutes on the rise. Harris has played well since his returning from an injury of his own, scoring double digits in his last two contests. Keep an eye on the wingman.

Michael Beasley, SF, Milwaukee Bucks (ESPN: 3.1 per cent; CBS: 8 per cent): Beasley went off for a season-high of 28 points to go along with five rebounds, four assists, three blocks and two steals in a win over the Spurs Tuesday. Do keep in mind teammate Giannis Antetokounmpo was sidelined with an illness, but this was also against the Spurs (you know, arguably the most-fundamentally crafted and defensive team in the league). There aren’t a lot of scorers left at the forward position this widely available, so, here’s another guy to keep tabs on.

Kyle O’Quinn, New York Knicks (ESPN: 5.5 per cent; CBS: per cent): When he’s given the chance, how many sporadic double-doubles does O’Quinn have to get before we all take him seriously? He’s now notched back-to-back double-doubles in points and rebounds, with one of them coming in just 24 minutes of action (that’s half the standard duration of a game, folks). We don’t have to tell you what to do at this point.

Zaza Pachulia, Golden State Warriors (ESPN: 10.1 per cent; CBS: 28 per cent): The overnight celebrity vet Pachulia (in addition of earned Twitter followers), has been doing enough to also earn consideration for your Fantasy team. Having by far his best season in FG percentage, he’s been flirting (not only potentially with his new fans), but with double-doubles and steals. So perhaps, this is your redemption to claim and brag about having another soon-to-be All-Star on your roster.

By Adrian Wallace
Tags: Michael Beasley, Seth Curry
This entry was posted on Sunday, January 15th, 2017 at 4:01 pm and is filed under Adrian Wallace, BASKETBALL, The Wire Troll. You can follow any responses to this entry through the RSS 2.0 feed. Both comments and pings are currently closed.