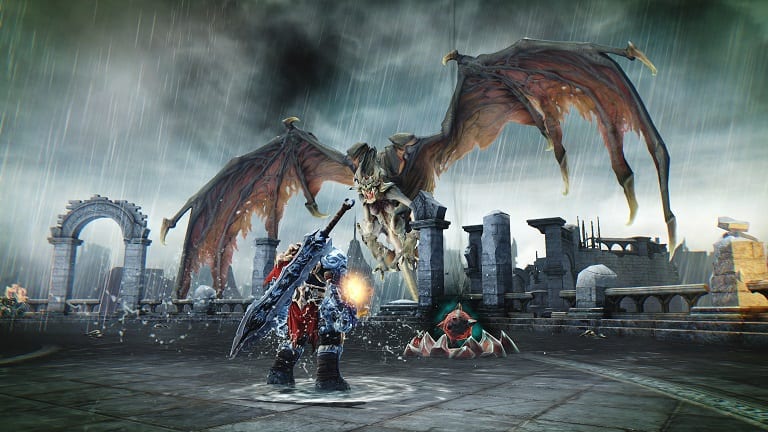 This is gonna end badly for you, Tiamat.

Fun fact: We own both the original Darksiders and its sequel… and have never played either of them. It’s not that we weren’t interested; we just never found the time. However, with Nordic Games becoming THQ Nordic, effectively resurrecting the THQ brand, and then unleashing Darksiders: Warmastered Edition, it seems like the perfect chance to check it out.

To put it mildly, Darksiders borrows liberally from Sony’s God of War, and as such it took us all of about two minutes to get comfortable with the way things handled. You’ll unleash a steady stream of combos, mixing in dodges and jumps against tougher foes. As you progress you’ll acquire additional equipment and weapons, as well as new attacks, to keep combat reasonably fresh.

While it handles like God of War in a lot of respects, there’s one key difference: the camera. Unlike the fixed angles of GoW, you have free rein over the camera here. It’s both a blessing and a curse. This is especially true when engaging multiple enemies at once as they can work their way around behind you. A lock-on function helps, but only in ensuring the toughest foes don’t get free shots.

Defensive prowess also lags far behind your offense. In theory you can parry, dodge or leapfrog enemy strikes, but in practice none of those work as well as they should. Parrying feels imprecise and not worth the effort given the small window for success. Dodging is worse, though, as War simply doesn’t cover enough ground to avoid some of the larger sweeping blows.

There’s some rudimentary platforming to tackle as well as a few on-rails sections to spice things up. We took more than our fair share of spills into molten lava when a jump didn’t trigger or we edged off a cliff and fell, but the game merely takes a chunk of health and returns you to your previous spot. The on-rails and shooting sections are forgettable.

With roots as a six-year-old last-generation game, Darksiders isn’t much of a looker even after getting the high-definition treatment. The textures look muddy, cut scenes vary in quality and there are plenty of glitches (big and small) that have made the trip. On the bright side, the level design holds up very well and the action flows smoothly.

Sound design is generally strong, buoyed by a cast of super serious sounding folks doling out some pretty generic dialogue. The low growl and stereotypical demonic tones do get to be a bit much after a while, though. Effects and soundtrack have aged gracefully.

War insists he was called, however, and convinces the council to allow him to return to uncover the truth of the matter. They agree but severely limit his power and send The Watcher to ensure that War complies with their instructions. Now War must track down the true culprits to clear his name and restore balance to the world.

While it lacks the historical name recognition and setting that made God of War’s similar “kill your way up the immortal food chain” story enjoyable, Darksiders delivers enough to keep pushing you forward as you wade through demons, chop down a boss and obtain some new item or weapon that allows you to get one step closer to your goal.

Beyond the combat, there’s also a healthy amount of environmental puzzles. Don’t expect too many mindbenders, but you may be temporarily stumped now and then by not recognizing a surface that can be scaled or missing an underwater tunnel to swim through. New items will also let you reach new spots in previous locations, offering some incentive to retrace your steps.

Killing enemies yields one of three types of orbs: health, currency and wrath. The two are self-explanatory, while wrath pertains to a meter for special attacks — both it and your health meter will grow as you progress. A secondary meter triggers your powerful Chaos Form, which allows you to really put a hurting on your enemies, albeit for a short time.

Darksiders offers a lot of ways to spend your currency, upgrading existing combos, purchasing new ones, improving secondary weapons, buying/upgrading wrath abilities, obtaining consumables and more. It allows you to customize your fighting style more than is initially apparent.

Despite doing a lot of things well, Darksiders also has some missteps, most notably in pacing. It feels like you spend too much time in many areas, jumping through one lengthy hoop — such as entering the shadow realm for four arena-style fights — only to have to collect another key, or solve another time-consuming puzzle and so on. It substantially undermines the momentum at times.

Still, when Darksiders starts firing on all cylinders it can be very intense with a pretty sizeable cast of enemies and some memorable bosses. There isn’t any additional content to speak of versus the original release, so bear in mind you’re largely paying for a more polished experience.

By Herija Green
Tags: Darksiders: Warmastered Edition, THQ, THQ Nordic, Video Game Review
This entry was posted on Thursday, January 12th, 2017 at 7:01 pm and is filed under Herija Green, Video Game Reviews. You can follow any responses to this entry through the RSS 2.0 feed. Both comments and pings are currently closed.