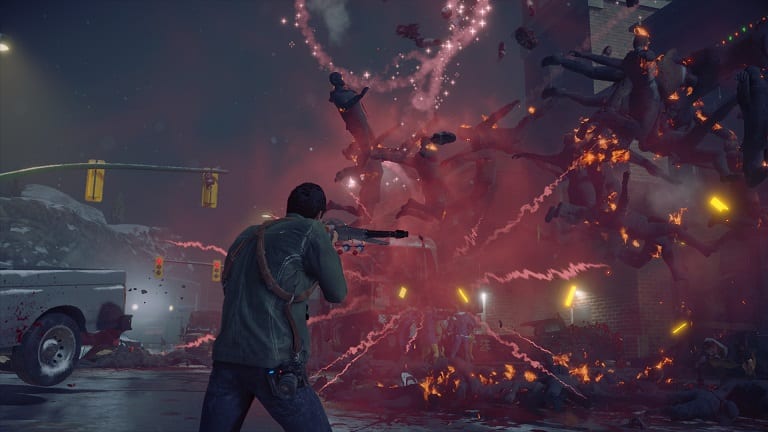 No matter which console you prefer, it’s hard to argue that Sony hasn’t had a stronger, more diverse set of first-party exclusives for its PlayStation 4. To help counteract this, Microsoft has targeted third-party series to appear first (or only) on the Xbox One, most notably Square-Enix’s Tomb Raider and Capcom’s Dead Rising.

With Dead Rising 3 checking in as one of Xbox One’s top launch titles, Microsoft once again pegged Dead Rising 4 as an exclusive and elected to close its 2016 releases with the holiday-themed zombie game. Time to see if that was a good decision.

As Frank West you have access to three types of weapons: melee, ranged and tossed (e.g., grenades), and the game does a great job of making it easy to employ your entire arsenal by assigning buttons to specific types. Face buttons are for climbing, interacting and swinging melee weapons. Triggers are for guns, and the left shoulder tosses out your Molotov cocktails and so forth.

What’s ultra smooth about it is that you automatically switch to these weapons as soon as you press the corresponding button, making it second nature to chain combinations together. Each one is immensely satisfying as well, which is a marked change from Dead Rising 3 in which shooting felt sloppy and clearly steered you toward doing most of your fighting up close.

For as much fun as it all is, there are some limitations within the control scheme. These typically show up when fighting the tougher and/or faster zombie types, as they can easily get behind you and can become tougher to target. The game will often flash button prompts to evade or counter impending attacks from off screen, but we didn’t find those as responsive as we would’ve liked.

Driving vehicles is also in play, and while the handling isn’t ideal, it was consistently good enough to plow through dozens of zombies without worrying about getting stranded. Still, nearly all of the enjoyment from getting behind the wheel comes from the absurd mash-ups of death Frank cobbles together and racking up huge kill numbers.

Rounding things out is a photography mode, which is used to solve investigations, identify hidden items and just take silly pictures for in-game challenges. It’s fine, but much like the game’s half-baked stealth elements it ends up feeling like a distraction from what DR4 does best — mayhem.

Most of what’s impressive about Dead Rising 4’s presentation is its ability to pack hundreds of zombies onto the screen at once and allow you to wade through them like a complete badass. The fictional city of Willamette and its massive mall are fun to explore, and there are plenty of clever winks and nods worked in, but it’s not on par with other open-world titles in terms of detail.

Pretty much everything in the game is done tongue in cheek, and that includes the performances from the voice actors led by newcomer Victor Nosslo, who replaces Terence Rotolo as West and does a great job setting the tone. His dialogue is smartly written and delivered with just the right mix of smugness and self deprecation. The holiday-themed soundtrack nails it as well.

Roughly a year after the events of Dead Rising 3 we find West working as a teacher. After being lured to a covert military facility by one of his students, he discovers the group is experimenting with zombies but is forced to escape before getting adequate proof. In response, the government frames West, creating a nationwide manhunt.

A few months later, he is approached by ZDC agent Brad Park with the opportunity to clear his name if he’ll return to Willamette to investigate another massive zombie outbreak. To unravel the mystery, West will need to rely on all his journalistic skills… and kill tens of thousands of the undead!

Yes, Dead Rising 4 continues the series’ path to the absurd in much the same way as Saints Row in which the story is played mostly for laughs alongside a bevy of weapon combinations designed around that same premise. Hang wreaths on the undead and watch it spit out electricity, attach fireworks to a crossbow to thin the herd, mix nitrogen with a costume penguin head to freeze zombies and so on.

There are potential weapons strewn throughout the world and finding new and exotic ways to kill the undead is the game’s biggest allure. Some longtime fans may consider the changes — such as no timer or story co-op — to be a bridge too far, and to that line of thinking we must concede DR4’s lack of difficulty feels like an obvious concession to woo a more casual audience.

A lack of challenge also robs the game of intensity as even when wading into literally hundreds of zombies they never feel like a true threat to your well being, even before you’ve started to upgrade your various skills and health. Some of the tougher zombies, such as the “fresh” variety that are faster and stronger, can put you down, but at no point did they ever take us out.

While Capcom has removed some classic Dead Rising elements, there is one significant addition: the Exo Suit. This temporary robotic suit makes you nearly invulnerable and able to hoist massive weapons, like parking meters and mailboxes, for huge multipliers. You can also combine the suit with various items (e.g., a vacuum cleaner) for unique elemental attacks.

Multiplayer offers a separate four-player co-operative mission that challenges you and your teammates to complete a handful of random missions across four increasingly difficult episodes. It’s clearly the more challenging experience, but it suffers from some bugs that lead to freezing and drop out. Hopefully a future patch will correct the issues.

There are things to quibble about with Dead Rising 4, but ultimately none of them detract from one very important item: it’s just damn fun to play.

By HC Green
Tags: Dead Rising 4, Microsoft Game Studios, PlayStation 4, Sony, Video Game Review, Xbox One
This entry was posted on Friday, December 16th, 2016 at 4:51 pm and is filed under Herija Green, Video Game Reviews. You can follow any responses to this entry through the RSS 2.0 feed. Both comments and pings are currently closed.