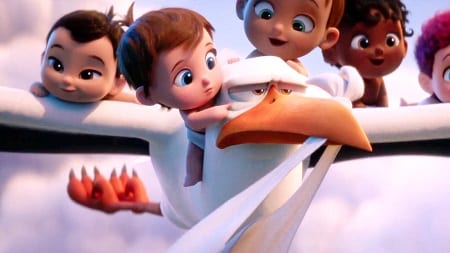 No wonder they got out of the business.

If you’re a parent, odds are you’ve come to appreciate the Pixar effect, AKA movies made for kids that still have enough nuggets thrown in to entertain adults. Once that formula proved profitable, however, the market was flooded with those types of movies. And for every Toy Story or Finding Nemo there was a Norm of the North (ugh).

Our latest entrant into that world is Storks, directed by Nicholas Stoller of Neighbors fame (not exactly a kid-friendly endeavour) and featuring the vocal talents of Andy Samberg and Kelsey Grammer. Time to find out if Storks can “deliver” a good time… see what we did there!?

After decades of successfully delivering babies all over the world, Stork Mountain now delivers packages for Cornerstone.com, an Amazon-inspired online retailer. Its top employee, Junior (Samberg), is called into the boss’ (Grammer) office and told he’ll be taking over as the man in charge… provided he fires Tulip
(Katie Crown), a human girl the storks adopted after failing to deliver her.

Unable to fire her, Junior instead reassigns her to the letter-sorting department, which has laid dormant for years. As fate would have it, however, a young boy, tired of being ignored by his workaholic parents, writes a letter seeking a baby brother. Upon receiving it, Tulip mistakenly places the letter into the baby making machine, leading to the first baby at Stork Mountain since Tulip.

Junior, who injures his wing attempting to retrieve the letter, decides he and Tulip must deliver the child lest he be fired for not terminating Tulip. Now a flightless bird and an orphan must make the journey to bring Diamond Destiny (their name for the baby) to a pair of unsuspecting parents without alerting the rest of the storks to their mission.

There are some legitimate laugh-out-loud moments in Storks. Not smiles. Not snickers. We’re talking full-fledged laughs from the gut. Easily one of the funniest scenes we’ve witnessed in a kid movie is the battle between Junior/Tulip and a group of angry, gibberish-talking penguins as they silently fight while trying not to wake the baby. Great stuff.

Another highlight is the wolf pack. After capturing the baby they quickly fall in love with “tiny thing,” and the dynamic between the Alpha and Beta wolves (played by Key & Peele) is really funny. The pack’s ability to form complex structures — such as a suspension bridge and a submarine — is the exact type of patently ridiculous stuff animation allows for.

Good chemistry between Junior and Tulip also helps keep the laughs rolling. Samberg really brings the character’s insecurities and exasperation to life, something that’s hardly a given in animation (just check out fellow SNL alum Jason Sudeikis in Angry Birds for proof). Grammer is also great as Hunter, the overbearing boss.

Most of the movie focuses on Junior and Tulip, but the secondary plot involving Nate and his parents isn’t as good. There are some funny lines from Nate trying to guilt his dad into spending time with him, but we didn’t care for Henry (Ty Burrell; Modern Family) and SarahJennifer Aniston), whose pendulum swings from 24/7 real estate agents to all-in parents in about two minutes.

While we liked most of the characters, Pigeon Toady didn’t click with us. Maybe he’s just a little too good at being annoying, but the whole “wassup bro?” shtick wears thin in short order. Thankfully he doesn’t get enough screen time to truly become irritating.

Ten minutes of deleted scenes — albeit in storyboard form — highlight the Blu-ray’s short but strong set of extras. You’re given an alternate opening and an unseen wolf pack form among a few others. There’s also a short “how to” parenting video from Pigeon Toady (decidedly more enjoyable here) and a couple minutes of outtakes ripped straight from the credits of early Pixar films.

Unlike some of the best kids’ movies, Storks doesn’t offer much to chew on, but its superficial approach also proves refreshing, and the laughs give it some legitimate staying power. If you have kids, this would make a nice addition to your collection.

By HC Green
Tags: Andy Samberg, Blu-ray reviews, Pixar, Storks
This entry was posted on Thursday, December 15th, 2016 at 5:10 pm and is filed under Herija Green, Movie Reviews. You can follow any responses to this entry through the RSS 2.0 feed. Both comments and pings are currently closed.