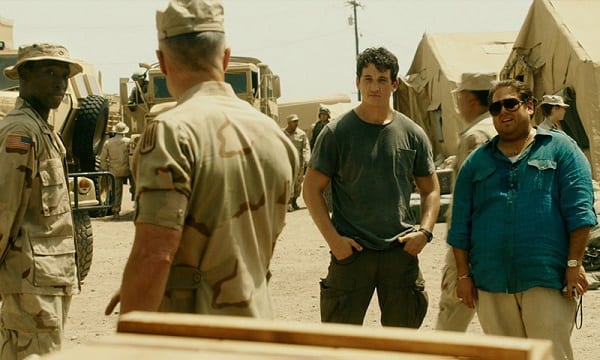 We just drove the triangle of death, dawg!

Known primarily for his work on ridiculous comedies like Old School and The Hangover (and its sequels), director Todd Phillips looks to broaden his horizons with War Dogs. The film is based on a Rolling Stone article about a pair of young entrepreneurs turned gun runners that got in over their heads, and while it doesn’t take itself too seriously, there are plenty of dramatic overtones.

Unhappy in his job as a massage therapist, David Packouz (Miles Teller; Divergent) sinks his life savings into high-quality bed sheets he intends to sell locally to Miami-based retirement homes. When the venture goes belly up, David finds himself with no good financial prospects along with another curveball: his girlfriend is pregnant.

As luck would have it, David had just reconnected with his high school friend Efraim Diveroli
(Jonah Hill) at a funeral. And Efraim, hearing of David’s troubles, offers to bring him on board to his company AEY, which is expanding quickly. The catch is Efraim’s company bids on gun contracts for the U.S. government in support of a war both David and his girlfriend Iz (Ana de Armas) strongly oppose.

Money trumps principle, however, and David takes the job while fudging the truth to Iz about what exactly they’re selling. Things start off well with the pair earning significant money, but when they see a chance to earn a huge payday they bite off more than they can chew, enlisting the assistance of arms dealer Henry Girard (obligatory Bradley Cooper appearance). Amid deepening tensions and higher stakes, the two must find a way to fill the massive order.

Hill has had no shortage of memorable roles during his career, from Superbad to Moneyball to Wolf of Wall Street, but we’re not sure he’s done a better job than what he did in War Dogs. While we have no idea how faithful the portrayal is to real life, Hill is simultaneously endearing and grotesque with his sweaty spray tan, greased back hair and high pitched laugh.

There are some funny moments and interesting situations for Hill and Teller to get into, highlighted by their trip to Jordan to drive an order of seized Berettas to a military base in Iraq. Its pacing can be a bit uneven at times, but it feels like the next misadventure is never too far away.

While the performances themselves may be good, you reach a point when the story feels impossibly skewed in the favour of the person that was involved with the film. Diveroli is portrayed as a morally bankrupt sociopath that brings about AEY’s downfall by basically screwing over everyone. Meanwhile Packouz is just a guy that wanted to support his family but got hooked on the action.

Conversely, the message of the film, if there is one, couldn’t be murkier. After almost two hours it’s hard to say War Dogs took a stance on anything it presents (the economics of war, the allure of fast money, doing bad things for good reasons). It’s just sort of “these guys made a ton of money in the craziest way possible,” so check it out. There could’ve been more.

Part of the true story’s shock value is how young Efraim and David were, and though the movie makes reference to this, having the characters played by a 32-year-old (Hill) and a 29-year-old (Teller) is a bit odd. They look like grown, career-aged men, not teenagers that have no business in the game.

It’s pretty slim pickings with the extras. A pair of making of/behind the scenes features fill in some of the back story and carry a little value because they feature news footage and comments from the actual David Packouz. An odd Schoolhouse Rock inspired song about “Pentagon Pie” rounds out the offerings and is equal parts funny and weird.

Buoyed by a crazy story, diverse locations and a mesmerizing performance from Hill, War Dogs is an interesting film despite some missteps.

By HC Green
Tags: Blu-ray reviews, Jonah Hill, Miles Teller, Movie Review, War Dogs
This entry was posted on Monday, November 28th, 2016 at 3:36 am and is filed under Herija Green, Movie Reviews. You can follow any responses to this entry through the RSS 2.0 feed. Both comments and pings are currently closed.