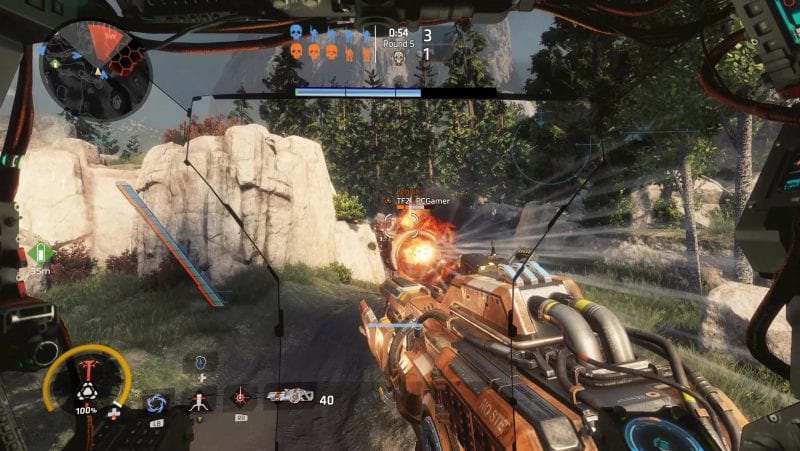 Sitting in a Titan makes you feel like you’re stomping that thing around.

As one of the early hits for the Xbox One, Titanfall has finally spawned (or, dare we say, Respawned…) a sequel unrestricted to just one platform.
Titanfall 2 is an explosive answer to the cries of hardcore fans of the first game while truly upping the ante in the FPS genre. The inclusion of a single-player campaign is just one of the calls expertly answered in this groundbreaking sequel.

If you’ve played the first game, you know what to expect. If you haven’t, be prepared for one of the most buttery smooth shooters we’ve ever had the pleasure to play. Movement and aiming controls are among the most responsive we’ve played since the first Titanfall, and we’ve seen many games recently try to match this and fail.

Titanfall 2 makes being a badass an extremely accessible option to even the most novice player via easy wall-running mechanics, helpful and varied gadgets, and expert map design. In no time, a new player will be running from wall to wall, dropping grenades and summoning Titans in one fluid motion. It just feels like a game you’re going to be addicted to.

Titanfall 2 absolutely crushes it in terms of set design, special effect use and interesting animations. It does lack in texture quality sometimes, making some characters look a tad too shiny and flat (Marcy, we’re looking at your faux hawk).

Trust us, it’s next to impossible to really notice any of the lower quality textures unless you spend hours playing the same areas and keeping an eye out for usually out-of-the-way examples of poor texture work.

Voice acting throughout the campaign is smashing, as is the soundtrack. Not a moment goes by without quality audio just pouring into your ears, be it the deep digital voice of Titan BT-7274 or the wet splatter of an infantryman falling victim to your stomping around.

We’ll just say it up front: there hasn’t been an FPS single-player campaign this good since Half-Life 2. Mic Drop. What made the original Titanfall a blast to play was the multiplayer maps catered to the experience of the game completely. They were tailored for running along walls and having close-quarters infantry-based combat while simultaneously featuring gigantic mech battles in the same map.

What Titanfall 2 brings to the table is a shooting experience that features an interesting, uplifting story full of amazing set pieces, awe-inspiring happenings and the wicked core gameplay that the franchise is becoming known for.

The story starts off with you in the boots of an anonymous rifleman fighting for the Frontier Militia, a military force charged with rebelling against a terrible, exploitative faction called the Interstellar Manufacturing Corporation — these IMC baddies want to wipe the Militia from Frontier Space and claim it as their own.

The story starts off with you in the boots of an anonymous rifleman fighting for the Frontier Militia, a military force charged with rebelling against a terrible, exploitative faction called the Interstellar Manufacturing Corporation — these IMC baddies want to wipe the Militia from Frontier Space and claim it as their own.

During one of the late battles of the war, an ordinary soldier named Jack Cooper (that’s you) and a marooned, pilot-less Titan form a bond of trust and understanding with one another to ensure each others’ survival.

This bond is strengthened through the use of in-game dialogue options in which you can choose things to respond to Titan BT-7274’s statements with. You can even teach him a little bit about sarcasm! Your task together is to claim a piece of technology called The Ark that possesses a nearly infinite amount of excruciating power.

We literally don’t even want to say anything further about the campaign; it’s truly that much of a treat. In short, it’s a non-stop ride that will only let you off in order to throw you like a fastball directly at an escaping enemy ship before it breaks atmosphere.

As for multiplayer… could Titanfall 2 just be less perfect? Please? We’d like to do something else someday rather than just play Attrition until our eyes burst.

Titanfall 2 is chock full of multiplayer options, with varied modes like Pilot vs. Pilot, a one-on-one mode housing great rewards, Amped Hardpoint (think a Conquest-style game in which you actually earn more points by staying inside the capture areas and defending them), and several others, but the real star, by far, is Attrition.

In an Attrition match, players are dropped by their chosen faction’s onto the battlefield. Running around with you and your live teammates are AI soldiers and attack robots that serve as score dispensers for your opponents. What they really act as is target practice, and the chaos that ensues during these battles is currently unmatched in intensity from any other shooter.

Going back to the game making you feel badass all the time, Attrition mode really reinforces that fact because any player can run around and feel awesome because they’ll be destroying groups of enemies. Once a player racks up enough score by way of kills and assists, they’re allowed to summon their Titan.

This time there are six different Titans to choose from, each with their own unique play style and gadgets. The most popular one in our matches was the Northstar, a slender Titan capable of flight, raining down a barrage of missiles, and taking out huge chunks of opposing Titans’ life bars with the chargeable rail cannon.

Honestly, try finding another game out there that completely shows the developers’ dedication to its fans and willingness to go the extra mile to make a fantastic title. Titanfall 2 is a model game, and we hope that the extremely high bar it set inspires others to follow suit.

By Jeff Cater
Tags: Electronic Arts, Respawn, Titanfall 2, Video Game Reviews, Xbox One
This entry was posted on Tuesday, November 15th, 2016 at 6:52 pm and is filed under Jeff Cater, Video Game Reviews. You can follow any responses to this entry through the RSS 2.0 feed. Both comments and pings are currently closed.