Interview: Mike Brown: From Linebacker to Lines of Code 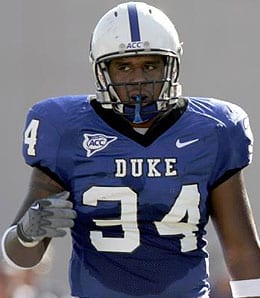 Michael “Tauiliili” Brown has turned his love of football into a career. (Goduke.com)

Like many former college football stars, it became clear fairly quickly to Mike “Tauiliili” Brown that the NFL was not going to be part of his future. But unlike most such talented young men whose dreams are scuttled, this didn’t stop Brown from becoming a star… in the world of Fantasy sports.

After earning All-American honours as the ACC’s leading tackler as a senior, this Duke linebacker went undrafted in 2009. The Indianapolis Colts penned Brown (who changed his last name to Tauiliili in college, but goes by Brown in his post-playing professional career) to a two-deal, but he never made it off the practice squad and was ultimately cut in early-September 2009.

He spent the next two years playing for Sacramento in the United Football League (where he was a big hit with fans as you can see in the video below) before playing pro in Germany for another three years.

In 2013, Brown wrapped up his playing career and was trying to figure out what to do next. He planned to go for his MBA and head into the business world when he was introduced to a programmer in Silicon Valley. Brown had just finished No. 1 in the inaugural cohort for Draper University, a nine-week entrepreneurial program.

He dove into it, teaching himself how to code and design and ultimately moving to the area in 2014.

“I went out there and a whole new world opened up to me,” Brown says.

He figured it made sense to work at a startup if he wanted to learn how to build a startup, so he landed a job at Kiip, a player in the mobile ad space and spent about a year and half there.

On staff there, Brown met some die-hard Fantasy football dudes who were prepping for the 2015 NFL season. Around the same time, he says he started noticing the inundation of DraftKings and FanDuel TV commercials.

“I think we can all agree it was pretty intense and annoying at times,” Brown says.

But he didn’t understand why none of his friends in the NFL were promoting it from their personal Twitter accounts.

“Russell Wilson was not saying ‘hey, go pick me for your FanDuel lineup this week,'” Brown says.

So he called some players and asked them about it, and he found they either didn’t care or didn’t like the idea — probably because so little of the money was ultimately going to them.

For instance, Brown claims one of his former teammates, Pierre Garcon, showed up 73 times in a FanDuel infomercial and was not paid.

At any rate, one of his co-workers tried to get Brown into the Fantasy league, but he had never played before. When he came clean and told him he doesn’t really play Fantasy football and that he’d literally just be giving them $50, the other guy explained it’s not really about the money. It’s about the fun, competing and talking shit — “nobody’s really stressing about the money,” the co-worker told him.

That’s when the lightbulb went off for Brown.

“If the money is not the sole motivation, what if we could put the money somewhere else where it would have an impact, and what if you could win something that money can’t buy?”

So he left the startup in November 2015 and got to work on creating Winwinfantasy.com, a new site that is similar to many other daily Fantasy football platforms, but instead of competing for money, you’re trying to win experiential prizes. The majority of the entrance fees (80 per cent) goes to a hosting player’s charity of choice, with the rest of the money covering the cost of running the business.

For instance, this weekend, three tournament winners will hop on a private jet (sponsored by Swift Aviation) with Arizona Cardinals star Patrick Peterson and fly to Baton Rouge to watch LSU play the University of Alabama. Before the game, Brown and Peterson will hand a cheque for US$42,500 (the proceeds from the tournament Peterson hosted) to the Baton Rouge Area Foundation to help pay for flood relief costs.

Previous prizes have included a meet and greet with Philadelphia Eagles safety Malcolm Jenkins, plus the chance to watch a game from his personal suite in Lincoln Field; a chance to meet Miami Dolphins LB Koa Misi; a football autographed by the entire Philadelphia Eagles team; and a VIP game day experience at a 49ers-Cowboys game.

In an exclusive interview, we also asked Brown about his thoughts on Fantasy football and some of his career highlights. The former Blue Devil agreed to talk to us even after we admitted we’re Tar Heel fans. You can hear the entire exchange by pressing the play button below.

Now it’s your turn. Let us know in the comments below what you think of WinwinFantasy.com.

By RotoRob
Tags: Michael Tauiliili, Mike Brown
This entry was posted on Friday, November 4th, 2016 at 3:28 pm and is filed under FOOTBALL, Interview, RotoRob, Site Reviews. You can follow any responses to this entry through the RSS 2.0 feed. Both comments and pings are currently closed.