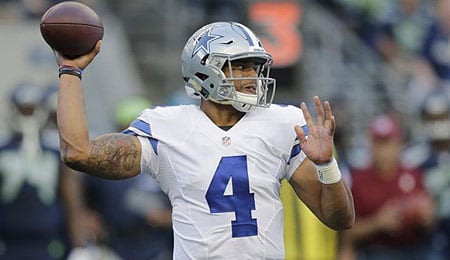 Dak Prescott is going to put Tony Romo out of a job. (AP)

While Mississippi State (2-4) still tries to figure out how to deal without quarterback Dak Prescott, the Dallas Cowboys rookie has wasted no time figuring out how to be an impact NFL player.

Sunday, he did it again, completing two-thirds of his passes en route to almost 250 yards with three touchdowns and one pick. In the process, Prescott broke Tom Brady’s record for most passes at the beginning of his career without being intercepted (see video below), and with Tony Romo soon returning, we’re about to find out how Dallas plans to deal with this situation. For our money, we think the Cowboys have to let Prescott play his way out of the job.

Now, let’s have a look at some of the Fantasy-relevant action from around the gridiron on Sunday.

LeSean McCoy’s knee is just fine, thank you very much. He tore apart the 49ers for 140 yards on 19 carries, scoring three times. McCoy now has back-to-back huge performances and after dealing with injuries last year has returned to be a serious force this season, currently enjoying his highest YPC (a league-leading 5.6) yet. And guess what? His amazing start has Buffalo looking like a playoff contender, winning four straight games as he’s really turned it on.

Washington QB Kirk Cousins wasn’t at his most efficient Sunday, but he struck for a pair of TD passes as the Redskins won their fourth straight game. He’s currently on a one-year deal with a ton to play for this season, but he has yet to be able to duplicate his breakout showing from 2015. Remember that Cousins led the league in pass percentage last season. This year? Just 14th, definitely not helped with 16 of his 34 passes missing the target on Sunday. His touchdown passes are down and the picks are up… a poor combo. If Cousins wants to be shown the money, we’ll need to see his 2015 form return very soon.

Based on his play the past two weeks, it may be time to consider adding Tennessee QB Marcus Mariota to your Fantasy team. He was extremely efficient in picking apart the Browns Sunday, racking up 284 yards on only 24 attempts, recording his second straight three-TD pass effort. This sophomore is looking solid right now, and he’s already over halfway towards equaling his TD total from his rookie season last year — with 10 games left to play. Yes, Mariota had a slow start, but he’s rolling now, and even contributed 64 yards on the ground in Week Six. We see a really big second half coming as this kid starts to figure it out.

Now it’s your turn. Let us know in the comments below how you see this Dallas quarterback controversy playing out.

By RotoRob
Tags: Dak Prescott, NFL
This entry was posted on Monday, October 17th, 2016 at 8:29 pm and is filed under College sports, FOOTBALL, NFL Today, RotoRob. You can follow any responses to this entry through the RSS 2.0 feed. Both comments and pings are currently closed.