Blu-ray Review: The Legend of Tarzan 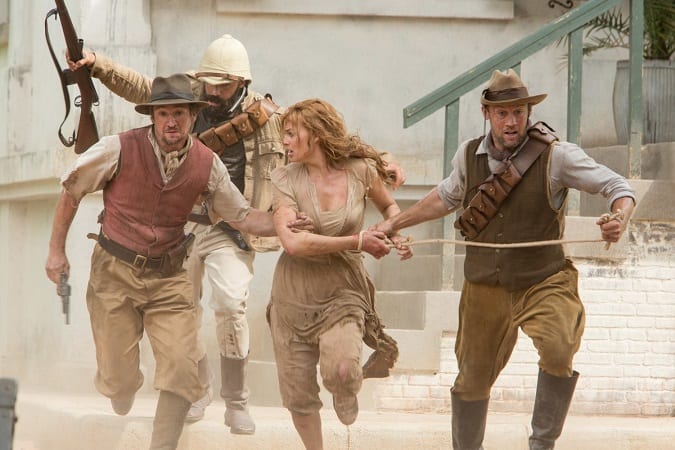 Much in the same way that 2015’s Pan was a reimagining of the Peter Pan story, The Legend of Tarzan sees fit to show a different version of another well-known character. Directed by David Yates, who helmed the final four Harry Potter films, and featuring some A-list talent, The Legend of Tarzan seemed to have a successful foundation in place; now to see if it can deliver.

Set in the late 19th century against the backdrop of King Leopold II’s Belgian occupation of the Congo, we find Leon Rom (Christoph Waltz) seeking out diamonds, ostensibly to pay for some grand army of mercenaries, but instead finding a tribe that kills his men. Rom survives, however, and is offered a deal by the Chief: bring him Tarzan and Rom can have all the diamonds he wants.

To that end, Rom engineers an invitation for Tarzan (Alexander Skarsgård, True Blood), now living in London as Lord Greystoke, to return to the Congo as an emissary to endorse Leopold’s work. While Tarzan initially refuses, George Washington Williams (Samuel L. Jackson), a U.S. envoy, convinces him to accept the invitation so that Williams can investigate his belief Leopold is enslaving the population.

From there, Tarzan, George and Jane (Margot Robbie) make the trek to the Congo where they reunite with the villagers they once lived with. It’s a brief reunion, however, as mercenaries descend on them and end up capturing Jane. Now Tarzan must return to the jungle he left behind to rescue his love and stop Rom from consummating his deal and creating a powerful army.

By and large the performances are quite good. Skarsgard makes a convincing Tarzan, both physically and in showing a mix of emotions triggered by his return to where he was raised by apes, the abduction of his wife and so on. Despite serving as a glorified McGuffin, Robbie manages to come across as capable and not simply a damsel in distress. And who doesn’t like Samuel L. Jackson?

Visually, many of the film’s locations are spectacular. The mix of jungles, plains, waterfalls and more just looks amazing. Some of the more tightly filmed scenes were clearly done on sets made up to look like the jungle, but there’s no mistaking the real thing when the camera pulls back and shows the vast expanse laid out in front of it.

There’s quite a bit of good action-adventure in Tarzan with a number of fights and plenty of heroic endeavours from Tarzan and George. To that end, some of the CGI sequences is really well put together, such as the man vs. ape fight.

While we’ve enjoyed Waltz in Quentin Tarantino’s films, he’s essentially channeling Hans Landa from Inglorious Bastards here, and it isn’t very effective. Waltz is positioned as a bureaucrat but is somehow able to go toe to toe with much younger, stronger fighters with his goofy rosary that he uses to strangle people. He’s a disappointing villain.

Bad CGI. It’s a curse. Yes, there are good moments — the aforementioned ape fight, the scene in which Tarzan greets several lions, a hippo attack — but there are some truly bad ones, too, and unfortunately they seem to occur in either critical moments or during signature activities.

Specifically, we’re talking about swinging on the vines toward the train car and the ridiculous stampede into the town of Boma. There are other suspect moments, but those two are the worst offenders. For a movie with Tarzan’s budget, it’s a bad look.

Remember when we asked who doesn’t like Samuel L. Jackson? Well, while we do like him, it should be noted that he is 100 per cent playing Samuel L. Jackson here. Sure, he gets in some one-liners that lighten the mood, but it’s tonally out of touch with everything else. We doubt there were many nut licking jokes in the turn-of-the-century Congo.

There isn’t much on tap with the special features, though one that explains a bit more of the back story as well as Tarzan’s relationship with Jane could be worth watching if you want more context. They also break down how they constructed some scenes, including the stampede, and discuss casting Skarsgard and why he was such a natural choice. It’s mostly fluff.

Although there are elements of a compelling adventure, The Legend of Tarzan trips itself up with too many moments that completely spoil the world’s authenticity.

By HC Green
Tags: Alexander Skarsgård, Christoph Waltz, Margot Robbie, Samuel L Jackson, The Legend of Tarzan
This entry was posted on Tuesday, October 11th, 2016 at 3:58 am and is filed under Herija Green, Movie Reviews. You can follow any responses to this entry through the RSS 2.0 feed. You can skip to the end and leave a response. Pinging is currently not allowed.