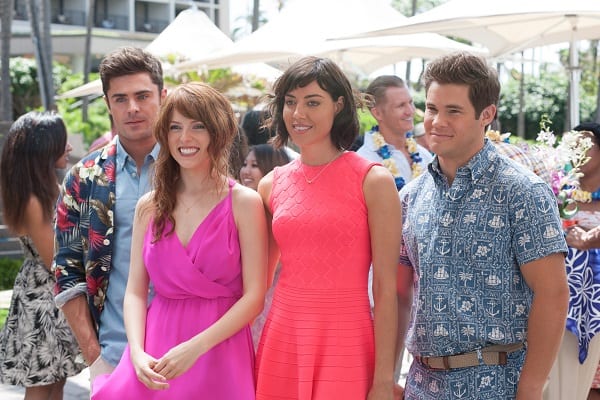 Mike’s outfit is ripe for mockery.

Ah, raunchy comedies. Where would the world be without them? Thankfully, we don’t have to find out as Mike and Dave Need Wedding Dates joins a long list of innuendo-filled flicks, helmed by first-time feature director Jake Szymanski. While the man in charge is new, this is the same writing team that gave us the Neighbors films, and thus reunites them with Zac Efron. Now let’s see how well they fare minus Seth Rogan.

Mike (Adam Devine; Modern Family) and Dave Stangle (Efron) are liquor salesmen that have a tendency to get a little rowdy, and when they’re informed that their younger sister is getting married the family sits them down and requests they find dates to bring to her wedding in Hawaii. Unsure how to find suitable matches, the two of them decide to post an ad on Craigslist.

Almost immediately the ad goes viral, generating thousands of responses and gaining the attention of Tatiana (Aubrey Plaza; Parks and Recreation) and Alice (Anna Kendrick; Pitch Perfect), party girls that feel they need a vacation. Their plan is to make themselves appear respectable (as ****) and trick the guys into taking them by staging an accident.

It works, and the four of them jet off to Hawaii together. While the rest of the Stangle family warms up to the girls, Mike becomes suspicious and jealous as plans are changed and the focus shifts away from him as well as his unrequited desire for Tatiana. With the wedding looming, can the girls keep up their cover story? And can Mike maintain his sanity?

There is a number of funny moments throughout the film, and both pairings (Efron and Devine, and Plaza and Kendrick) work well together. While the guys would be considered the stars, the girls actually prove to be the consistently funnier duo — Efron is playing the sort of straight guy to Devine’s manic ramblings, which can be a bit much after a while.

In addition to solid work from the primaries, the supporting actors are funny as well. Sugar Lyn Beard does a nice job as the bride, using a mousy voice and small size to her advantage for some real “out of character” moments like the massage and releasing the horses. Mary Holland is underutilized as the stressed out maid of honour.

Although bonus features are typically, at best, nice supplements, a lot of the funniest stuff is actually located in the 90-plus minutes of extended or deleted scenes. Numerous moments were obviously ad-libbed or loosely scripted, and watching the riffs play out one after the other is great. It’s not hard to see why some of the stuff was cut, but that doesn’t mean it isn’t funnier than what they kept in — shout out to Plaza’s teeth brushing line.

Nobody is expecting a stellar plot from an over-the-top comedy, but Wedding Dates is about as cookie cutter as they get. Every story beat is predictable, from what happens with the girls gaining favour to the wedding getting put in jeopardy to the “we gotta fix this” moments. The laughs are clearly the featured attraction, but something a little less paint by numbers would’ve still been nice.

As noted, Devine’s character can be abrasive. We’ve only seen him in smaller roles (the “manny” in Modern Family, Robert de Niro’s office buddy in The Intern), but pushed into a featured turn, he’s just too amped up. While it may well have been what was asked, constantly having Mike’s emotional state cranked up to 11 is exhausting. The crying is probably the best embodiment of how overdone it is.

In terms of extra content, Wedding Dates is at or near the top of any movie we’ve covered. There’s all the aforementioned extended and deleted content, a legitimately funny gag reel, Funny or Die short docs and several spots where they just let the actors ad-lib their lines repeatedly. The alternate storyline involving a roast pig is kind of a dud, though, and it’s just as well that they removed it.

Mike and Dave Need Wedding Dates is a funny movie that gets a sizeable amount of value added from its suite of excellent bonus content. This is one time when we’d strongly advocate purchasing the physical version because the extras really do contain some of the film’s most comically inspired moments.

By HC Green
Tags: Anna Kendrick, Aubrey Plaza, Blu-ray reviews, Mike and Dave Need Wedding Dates, Zac Efron
This entry was posted on Friday, September 30th, 2016 at 3:54 am and is filed under Herija Green, Movie Reviews. You can follow any responses to this entry through the RSS 2.0 feed. Both comments and pings are currently closed.