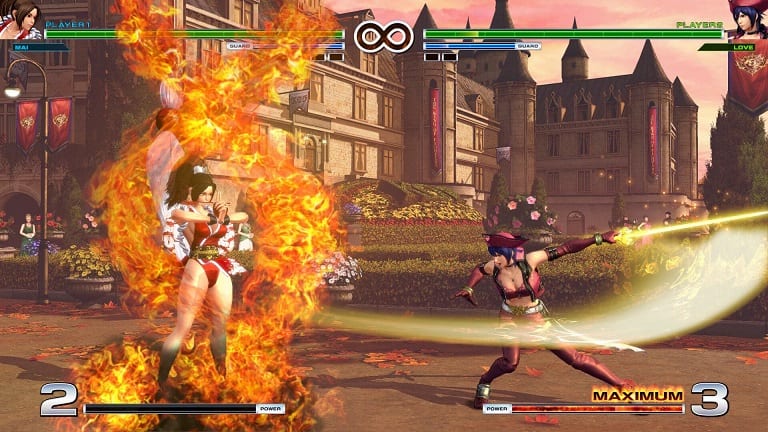 STDs are no joke.

King of Fighters XIV is the latest in the long-running series, and it boasts a host of characters and stages from all timelines and former games. That being said, it introduces a few noob-friendly mechanics while also changing up the formula of the match structure.

This ultimately results in an experience that feels like a mid-life crisis, when you switch up some of the things that made your game great in the first place.

Visually, KoF XIV looks nice enough in motion, at least when cut scenes aren’t playing. Most cut scenes showcase little to no emotion throughout, and they are animated rather stiffly in comparison to the fighting side of things.

The game certainly won’t wow anyone graphically, although many of the characters have pretty sweet looking MAX moves. Plus, it doesn’t ever seem to shy away from its 60fps average framerate, contrary to what some message boards claim. We certainly never noticed a dip.

Picking your fighter is usually a singular affair in fighting games, but in KoF you have to pick three of them to form a team for battle. In the thin story mode this is pretty cool because certain characters interact with one another in different ways depending on who you pick so there’s a lot there for a fan to look for.

This is also what makes the game pretty difficult to grasp for someone who isn’t already a fan, because mastering three characters is quite a monumental task. The controls are easy enough to fake being good at as most fighters, but with the vast variety of characters available it’s unlikely that button mashing will get you very far here.

Controls are deceptively responsive, though given that the roster of the game is absolutely huge it might take a bit of time to sift through the more sluggish characters to find the speedier ones. Once you get there is when King of Fighters XIV starts to click.

In KoF XIV there are no fewer than 50 fighters to choose from, with 18 of them being new to the franchise. Mix them up how you see fit and find the cruelest combination you can! As long as you play locally, it’s great fun to play this with another person.

Unfortunately, our time spent trying to find a low latency match usually resulted in still finding a pretty damn laggy affair. There are 19 stages to choose from, which are all visually varied but not particularly interesting to look at.

The thing about this game is that it’s highly technical. Like, really damn technical. In order to pull off some of the better combos you will be looking at learning some severely difficult button inputs. There is a training mode to help you out, but unless you’re strictly playing local you can kick a lot of that time you spent training to the curb.

Also, it being a highly technical fighter, it’s hard to get someone else to play this game with you and have a really good time. That’s not to say that it’s a bad game at all, but it’s just a tough sell to a person that’s unfamiliar with the game.

Without the proper netcode, there’s almost no reason to get this game unless your household is a KoF one, or you’re dying for a deep fighting engine. In that case, King of Fighters XIV almost over-delivers and you’ll find yourself with an absolute wealth of character combinations and tons of combos to practice and master.

King of Fighters XIV is a brilliant fighter, but because of problems with lag online it’s difficult to find anyone to play against successfully at this time. Local play is where the real quality action is, and until something changes that’s where it’ll stay.

By Jeff Cater
Tags: Atlus, King of Fighters XIV, Video Game Review
This entry was posted on Wednesday, August 24th, 2016 at 8:17 pm and is filed under Jeff Cater, Video Game Reviews. You can follow any responses to this entry through the RSS 2.0 feed. You can leave a response, or trackback from your own site.