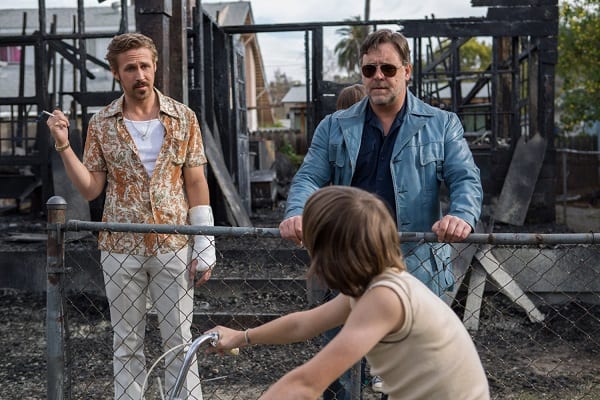 If anyone understands the “buddy cop” dynamic, it’s Shane Black, with writing credits including the Lethal Weapon series, The Last Boy Scout and the criminally underrated The Long Kiss Goodnight. He has been largely inactive since the late ’90s, outside of 2013’s Iron Man 3, but he has returned to write and direct The Nice Guys, a ’70s detective flick starring Russell Crowe and Ryan Gosling.

Healy does this by breaking March’s arm, but when armed thugs try to extract information about Amelia Healy decides his best course of action is to team up with March to get to the bottom of things. March is none too enthusiastic about the proposal initially, but after prodding from his teenage daughter Holly and a little advance money from Healy, March comes around.

From there the duo sets out to piece together the apparent murder of Mountains, how it all relates to Amelia, the daughter of a high-ranking attorney in the Justice Department, and just how deep this investigation runs.

Casting veteran dramatic actors Crowe and Gosling in the starring roles was a bit risky, but both prove to be more than up the task. Gosling, who was great in a largely comedic turn in The Big Short, once again excels as the downtrodden Holland March. He and on-screen daughter Ashley have strong chemistry, as do Gosling and Crowe, who is a million miles from recent films like The Water Diviner and Noah while still retaining some level of physical intimidation.

Despite being a comedy, The Nice Guys also tells an interesting story. The mystery contains multiple layers along with a few twists and turns, creating enough ambiguity along the way that you’re not quite sure where it’s going until the end. This is helped by some smartly written dialogue as Black walks a fine line between laughs and serious moments.

That split between comedy and action extends to the physical arena as well, and Black furthers his track record of blending the two seamlessly. There are plenty of shootouts to whet the appetite of action fans, but Black never loses sight of gunning for laughs — such as when Gosling goes to toss a gun to Crowe and ends up throwing it through the window.

A couple of the characters didn’t really click with us, namely Blueface (Beau Knapp) and the annoying target of the investigation, Amelia (Margaret Qualley). The former ends up being not as funny as Old Guy (Keith David) or as menacing as John Boy (Matt Bomer), making him sort of disposable. The latter is like nails on a chalk board to the point that we stopped caring what would happen to her.

The Nice Guys runs a bit long, and it could’ve safely dropped the storyline about March’s past as it pertains to their previous home. Holly has a couple of scenes with Healy about, but they add little to the film and end up extending the run time.

A pair of extras is available, both of which make for enjoyable viewing despite largely covering the same ground. They’re mostly about recreating the era in which the film is set as well as Black’s love of old detective films and his desire to make this picture. As with the movie itself, everyone seems to have had a lot of fun working on it.

While it may not be the launch point of another Lethal Weapon level franchise, The Nice Guys packs plenty of laughs and action in its own right, and we’d definitely be on board for a sequel.

By HC Green
Tags: Blu-ray reviews, Russell Crowe, Ryan Gosling, The Nice Guys
This entry was posted on Monday, August 22nd, 2016 at 1:43 am and is filed under Herija Green, Movie Reviews. You can follow any responses to this entry through the RSS 2.0 feed. Both comments and pings are currently closed.