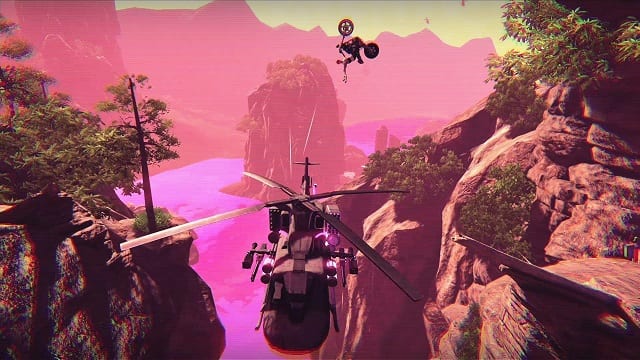 What do you get when you combine the vibrant neons and attitude of Far Cry: Blood Dragon with the insane track and stunt stylings of the Trials series? Unfortunately, you get a jumbled mess with several great ideas but a severe identity crisis. The game, Trials of the Blood Dragon, isn’t completely devoid of fun, but it does tend to crank the brakes just when stuff starts getting good. Let’s take a look!

If you’ve played a Trials game before you’ll know what to expect initially: throttle up with R2 and hit the brakes with L2, while maintaining your riders balance with the left stick. Things get a bit muddy when you hop off your bike for platforming segments. “X” will get your character to jump, L2 will make them crouch and R2 will fire your weapon.

Sensitivity on the movement stick feels just flat out weird when in play though, and the character seems to be a bit too floaty when trying to jump around. At other times, you’ll pilot all sorts of different vehicles, and while they all control in a similar fashion it does tend to be a bit jarring when switching from a motorcycle to, say, a mine cart.

In the background of most levels, you’ll be treated to fleets of helicopters gunning their way down rivers or gigantic Blood Dragons running rampant and smashing everything in their wake, just to give a couple examples. The unfortunate thing about how great the game looks is that the level design itself is much less complicated than past Trials games, to the point that most stages can be cleared with minimal use of anything you’ve learned before.

The soundtrack is in true tradition of the Blood Dragon fame, and might actually be better than Far Cry’s thanks to the theme variety. Each stage has a perfectly fitting theme song attached to it that matches the on-screen mayhem. Plus, you can choose from all the tracks in the main hub to give them a listen.

As noted in the graphics section, the stage design really drags Trials of the Blood Dragon down as a whole. You’ll be bounding over simple obstacles the entire time, never truly tapping into what Trials was really all about in the first place.

Never will you be facing the treacherous cliffs and “eeeeeasy-does-it” sections you’re familiar with, but rather just nailing landings to massive jumps and sometimes having to deal with the levels themselves messing with you.

For instance, spinning the entire level as you negotiate simple bumps and jumps, or cramming so much debris and clutter onto the track area that it’s just not immediately apparent what you need to do. That leads to frustrating restarts instead of the classic “THAT DAMN CLIFF” breed, which just reflects the uninspired level design.

Blood Dragon also throws several different genres into the mix without warning. One minute you’ll be clearing massive jumps over canyons full of helicopters, and the next you’ll be infiltrating a facility and gunning down clueless bullet catchers while dodging insta-kill platforms with poor, floaty controls. That’s not to say that it isn’t at all fun, it just ends up a bit dodgy in practice.

After all, clearing a room full of bad guys and pulsating alien tumors from the back of a motorcycle with an Uzi with infinite ammo is thrilling as hell, it’s just so damn wonky, and to be honest it looks quite silly most of the time. But that’s part of what makes the game work, because Blood Dragon as a concept is all about silliness and extremes, and this game is seriously chock full of it.

Trials of the Blood Dragon had a few issues deciding what to wear when going out, so it just put a little bit of everything on. She looks great under those neon lights and is fun most of the time — except when she’s forcing you to use a grappling hook or making you test your inner Donkey Kong with some pace-destroying mine carts.

By Jeff Cater
Tags: Trials, Trials of the Blood Dragon, Ubisoft, Video Game Review
This entry was posted on Friday, July 8th, 2016 at 4:20 pm and is filed under Jeff Cater, Video Game Reviews. You can follow any responses to this entry through the RSS 2.0 feed. Both comments and pings are currently closed.