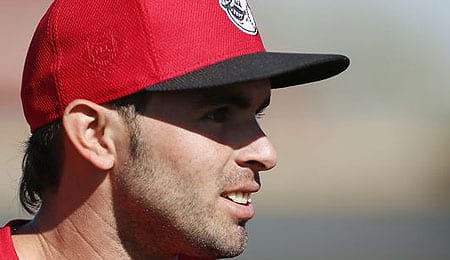 As long as he’s in the bigs, Jose Peraza is a great source of steals. (The Enquirer/Kareem Elgazzar)

Welcome back to another week of Fantasy baseball and our waiver wire recommendations. Once again, JB is dealing with school stuff, but he’ll return next week. For now, you’ll have to settle for RotoRob.

This week, Michael Saunders reminded us he’s got some serious game; the Cards inked their apparently PED-taking first round pick, Delvin Perez; and AL walk leader Jose Bautista has landed on the DL with a toe woe.

Jose Peraza, SS, Cincinnati Reds (ESPN: 2.2 per cent; CBS: 14 per cent): The Venezuelan prospect is all about speed, so even if he’s up for just a short-term stay, he’s worth rostering. After all, Peraza has swiped 219 bags in 516 career minor league games, and added another three thefts in his first two games since being recalled last week. He’s also showing some nice instincts in the field (see video below). While Cincy plays in AL parks and needs a DH over the next few days, he’ll be a useful part. However, the long-term plan for the Reds to is continue Peraza’s apprenticeship at Triple-A until a full-time opportunity arises for him.

Wilmer Flores, 3B/2B/SS, New York Mets (ESPN: 2 per cent; CBS: 9 per cent): With both Luca Duda and David Wright out, Flores is seeing plenty of PT, and while he hasn’t been tearing it up, he did go yard on Saturday. A natural shortstop, Flores’ ability to play every infield position not only helps guarantee him PT, but makes him valuable as a multi-position eligibility player. Take a look at him in deeper leagues if you need infield help.

Carlos Estevez, RP, Colorado Rockies (ESPN: 22.2 per cent; CBS: 33 per cent): Jake McGee is on the DL, opening up the closer gig in Colorado, and so far Estevez has taken the job and run with it, earning saves in each of his last three appearances — all of which were flawless outings. Estevez was pitching okay in his first taste of Triple-A, but has really sharpened his game since being promoted in late-April. This Dominican youngster emerged as a closer last year at High-A and Double-A and now he’s proving he can finish games in the Show, too.

Max Kepler, OF, Minnesota Twins (ESPN: 1.4 per cent; CBS: 10 per cent): The Twins’ second best prospect is getting a chance to play with Miguel Sano on the DL and Oswaldo Arcia getting DFAed. Kepler got off to a sluggish start at Triple-A this year, but then really turned it on in May (876 OPS) before getting hurt towards the end of the month. At the beginning of June, he earned his second promotion to Minny this year, and this time he seemed more ready, having currently hit in five straight games, spanking three doubles in the process.

Kendall Graveman, SP, Oakland Athletics (ESPN: 1.5 per cent; CBS: 8 per cent): Graveman’s been inconsistent, yet has given up two earned runs or less in five of his last six starts and you’ve got to know his rotation spot is solid given all the injuries to Oakland’s starting pitchers. Heading into the season, we slotted him in the top 120 in our Starting Pitcher Rankings, but thanks to his ugly record, he’s fallen well short of our projections. Still, given that Graveman has shaved nearly a run off his ERA in about five weeks, we like the direction he’s trending.

Ricky Nolasco, SP, Minnesota Twins (ESPN: 4.2 per cent; CBS: 9 per cent): Nolasco has improved his hit rates this year, but with back-to-back quality outings, he may be hitting his stride. Homers have been a real problem this year, but he seems to be addressing that issue of late, too, with only one dinger allowed over his last three starts.

Shawn Kelley, RP, Washington Nationals (ESPN: 22.9 per cent; CBS: 38 per cent): Here’s another opportunity to bag some short-term saves while a closer (Jonathan Papelbon) is on the DL. Kelley is on pace for a career high in innings in his first season in Washington, and he’s been nearly impossible to hit while enjoying a career best in K/9. Grab him while you can and even when Paps gets back, Kelley will be useful for his holds, ERA, WHIP and punchouts.

Tyler Anderson, SP, Colorado Rockies (ESPN: 7.8 per cent; CBS: 8 per cent): This rookie lefty is looking like a seasoned pro just two starts into his career.

Mike Fiers, SP, Houston Astros (ESPN: 36.1 per cent; CBS: 38 per cent): This soft-tossing righty has looked very sharp this month, but note that he had to come out early Sunday after getting drilled with a comebacker.

Stefen Romero, OF, Seattle Mariners (ESPN: unowned; CBS: unowned): Romero was up briefly with the Mariners a couple of weeks ago, but given his assault on Triple-A pitching, he deserves a longer look. We think he could really get the job done, so at least track this dude.

Mychal Givens, RP, Baltimore Orioles (ESPN: 2.7 per cent; CBS: 5 per cent): Seeking wins, holds, ERA and a crapload of Ks? Givens is your man as he’s really raising his profile this year.

Chris Devenski, RP, Houston Astros (ESPN: 1.5 per cent; 3 per cent): Long relievers don’t tend to generate much Fantasy value, but this dude has a deadly changeup and has been racking up the goose eggs.

Deolis Guerra, RP, Los Angeles Angels (ESPN: 0.1 per cent; CBS: unowned): Guerra has been back and forth between the Halos and Triple-A this season, but the towering Venezuelan righty looks like he’s going to stick in the Show for now and his command has been so off the charts, we won’t be shocked if he moves into a set-up role at some point.

By RotoRob
Tags: Cincinnati Reds, Jose Peraza, Michael Saunders, St. Louis Cardinals
This entry was posted on Sunday, June 19th, 2016 at 10:17 pm and is filed under BASEBALL, RotoRob, The Wire Troll. You can follow any responses to this entry through the RSS 2.0 feed. Both comments and pings are currently closed.