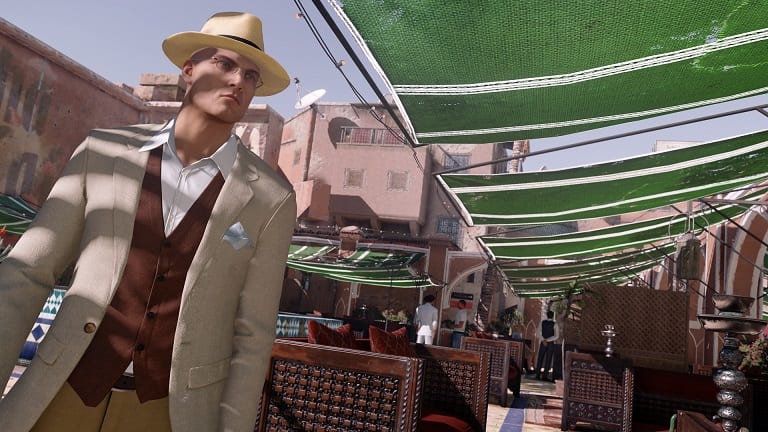 Don’t let the outfit fool you, 47 can still kill you 856 different ways.

Unlike the last mission, your targets are in two completely different areas. This has its pros and cons. On the plus side, you’ll need to plot out a unique strategy for eliminating each of them, which helps make Marrakesh feel more like two episodes.

That’s also a bit of a letdown, however, as there’s no sense of cohesion between them. The embassy and school where Zaydan is headquartered are a good distance apart, and nothing happens when one is killed — no increased security, no relocation, no heightened concern. If you were the target of a countrywide fury and the man that helped you was killed, you’d probably skip a TV interview, no?

In terms of options, you still have plenty, whether you try to piece it together on your own or use one of the many “opportunities” to get close. The latter are generally enjoyable, even though it feels like the game is holding your hand.

It’s worth noting, however, that while the opportunities are target specific, Hitman doesn’t tell you which one it is in the description. That means you can eliminate someone and then still begin tracking an opportunity that has nothing to do with the remaining target. For example, stealing a key to the school even after Zaydan is dead.

Marrakesh makes for an interesting locale with colourful kiosks in a bustling marketplace, and yet it never feels as vibrant or alive as Sapienza did. Part of the problem is clearly the voice acting, as Moroccan and Swiss citizens speak with American accents and lingo. It really undercuts the authenticity and immersion level.

A.I. seemed spottier that usual, and reactions are disproportionate. For the former, we were disguised as someone hanging posters. After we walked in as part of a group, we snapped Zaydan’s neck on a stairwell. His body was discovered less than 30 seconds later, but no one raised an alarm or so much as batted an eye as we strolled out the front door.

As for reactions, pretty much anything can result in you getting killed, no matter how innocuous. At one point we turned off a fan, were spotted by a passer-by and then confronted by an armed guard that literally shot us to death… for turning off a fan. It’d be better if it was more of a “we’re watching you” scenario than jumping straight to killing.

That Episode 3 is a step back for Hitman isn’t a huge surprise given how strong Sapienza was, but there seem to be more issues than normal with Marrakesh. It doesn’t help that the snippets of story we’ve been given seem largely unrelated to what we’re actually doing on these missions.

By HC Green
Tags: Hitman, Hitman Episode 3, Marrakesh, Square Enix, Video Game Review
This entry was posted on Thursday, June 2nd, 2016 at 4:52 pm and is filed under Herija Green, Video Game Reviews. You can follow any responses to this entry through the RSS 2.0 feed. You can skip to the end and leave a response. Pinging is currently not allowed.