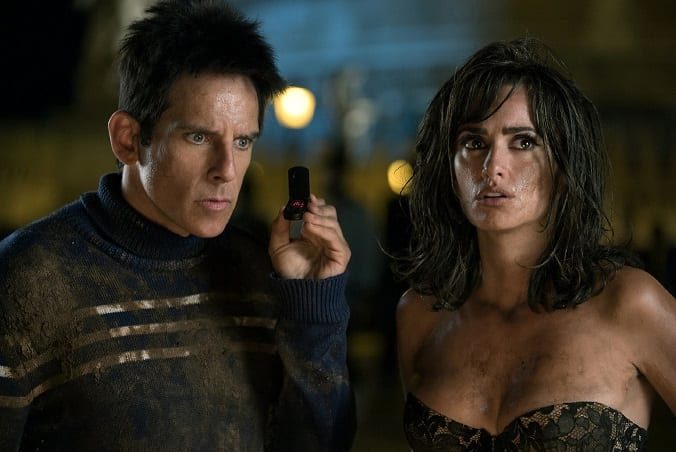 SNL circa 2001 called… it wants its tiny prop phone back.

For us, the original Zoolander was kind of like Super Troopers in that it was purely a word of mouth film that we ended up really enjoying — despite the fact that we’re not huge Ben Stiller fans. It was relentlessly stupid in all the right ways, with Stiller and Owen Wilson throwing haymakers at the absurdity that is the fashion world and Will Ferrell doing Will Ferrell stuff as fashion mogul Jacobim Mugatu.

Now, nearly 15 years after the original, Stiller, Wilson and Ferrell (along with newcomers Kristen Wiig and Penelope Cruz) try to recapture the magic with Zoolander 2.

We open to find both Derek Zoolander (Stiller) and Hansel (Wilson) retired from modeling in the wake of a tragic accident at the famed “Derek Zoolander Center For Kids Who Can’t Read Good” that took the life of Derek’s wife, leading to child services taking custody of their son, and disfiguring Hansel. Both live as hermits, but a visit from Billy Zane bearing an invitation from Alexanya Atoz (Wiig) coaxes the pair out of retirement for one last show.

While they end up being mocked at the show itself, they’re approached by Valentina Valencia (Cruz), who brings them up to speed on a recent spate of celebrity assassinations, all of whom died with one of Derek’s trademark expressions on their face. In exchange for Derek’s assistance, Valentina helps him track down his son, who’s at an orphanage in Rome.

All of these coincidences raise suspicions, prompting Derek, Hansel and Valentina to visit the one man with a known axe to grind, Mugatu (Ferrell). Their prison encounter doesn’t go as planned, however, allowing Mugatu to escape, but not before letting Derek know that he was behind all of the misfortune that had befallen him, including fattening up his son and bringing him to Rome. Can they stop Mugatu before he carries out his true plan?

Among the newcomers, the best work is done by relative unknowns Cyrus Arnold as Derek Jr. and Kyle Mooney as designer Don Atari. Arnold is funny as Derek’s rejected (and overweight) son, who resents his father’s moronic attempts to re-enter his life. Mooney has a smaller part, but his mile-a-minute contradictions are well done, talking negatively about everyone and everything before ending with something about how much he likes it.

There are some of the best cameos this side of Entourage here. In addition to Zane, Sting has a fairly involved role, Justin Bieber is gunned down, MC Hammer is in fashion prison for his pants, and several real-life designers make fun of themselves while Kiefer Sutherlandis… doing something we don’t want to spoil.

For as talented as Ferrell and Wiig are, they barely share the screen in Zoolander 2. Wiig’s part is quite small, and Ferrell doesn’t show up until fairly late. Ferrell definitely has some moments as Mugatu, especially when dressed as a clown, but Wiig’s one-note mispronunciations don’t work. In fact, the funniest thing she does is a pretend commercial on the disc extras.

Cruz, who essentially assumes the role Christine Taylor filled in the original, isn’t great, either. She’s obviously gorgeous, and we’ve liked her in other movies, but there’s no chemistry between her and Stiller, and we didn’t find her featured moments funny. It’s also worth noting that Fred Armisen is creepily awful as a partly CGI character named VIP. Even thinking about it now makes us cringe.

As fans of the original film, we found the four bonus features actually quite good. The Legacy talks about the release of Zoolander, and how it came out in the shadow of 9/11. It’s an interesting back story, as is the Drake Sather piece about how the character came into being at the VH1 Fashion Awards. As previously mentioned, Wiig’s “Youth Milk” ad is her best moment.

While not as good as the original, Zoolander 2 still manages to elicit some laughs while staying true to the baseline stupidity of its predecessor.

By HC Green
Tags: Ben Stiller, Blu-ray reviews, Owen Wilson, Will Ferrell, Zoolander 2
This entry was posted on Monday, May 30th, 2016 at 5:11 pm and is filed under Herija Green, Movie Reviews. You can follow any responses to this entry through the RSS 2.0 feed. Both comments and pings are currently closed.