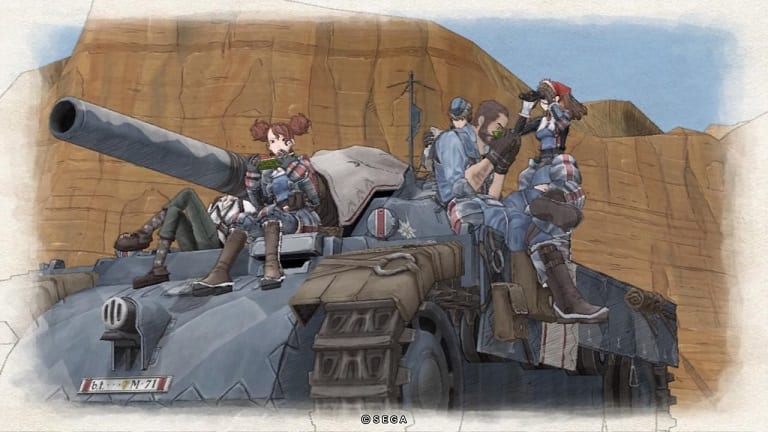 When it was originally released in 2008, Valkyria Chronicles failed to gain a large audience. However, it garnered a huge cult following thanks to its very involved story, large character set and unique mash-up gameplay. In a pseudo-World War II situation, the land of Europa is divided, and a small resistance is helping to defend a neutral country of Gallia.

This sets the stage for Welkin Gunther, our unlikely hero (because when is a hero in anime ever likely?), as he joins the militia and enters an epic story told across 18 in-game episodes. The Remastered edition offers some minor improvements and extra DLC missions, but it’s mostly released to expose this cult classic to a new generation.

At its core, Valkyria Chronicles Remastered is a mash-up of turn-based strategy, third-person shooter and RPG. That being said, the strategy and RPG elements are run through map/menu selection. After selecting the starting point for you turn, the game turns into a third-person shooter, be it with a character or a vehicle.

Compared to the standards set by modern entries in this genre, the controls are a little stiff, particularly with driving vehicles. An analogous situation is the first-person controls for Fallout 3/New Vegas — they’re passable but certainly not as crisp or precise as you’d like.

R1 activates the targeting mode, allowing you to complete the move’s action. In combat, the square button changes your specific actions while the “X” button allows you to interact with the environment (take cover, crouch). Meanwhile, the circle button ends your action, which you can do at any time.

Note that while you can save in between every turn by accessing the options menu (triangle) at the map screen, you can’t do this during an action. Also, there’s no auto-save feature, so save before you attempt a ballsy maneuver.

Valkyria Chronicles was originally released early in the PS3 cycle, and it shows. Notes from the publisher stated up front that it didn’t get the shiny new coat of paint that other remastered projects, such as The Last of Us, received.

Visually, the upgrade is a minor bump in resolution, from 720p to 1080p. In other words, it’s not going to make too much of a difference in your experience. Models can be jagged and animation can be stiff, sometimes on par with late-generation PS2 games.

That being said, it’s hard to argue with the unique steampunk anime art style and strong character/vehicle design — it’s part of the reason why the game received such a cult following.

If you’ve never seen it before, Valkyria Chronicles uses a combination of cel-shaded anime-style characters against backdrops that look like vibrant watercolour paintings. The result is one of the most unique graphical styles you’ll ever see in entertainment. And it still holds up nearly a decade after its original release.

Characters are given numerous voiceovers as story development takes place via post-mission cut scenes. If you’re familiar with anime, the voice-acting style will feel par for the course. There’s some melodrama and over-the-top characterization (such as the soldier who really wants to be an actress), but it all fits in with the style of the game.

By mashing genres together, Valkyria Chronicles Remastered creates a new experience all on its own. Most strategic turn-based games feature some form of grid system (see X-COM, Shadowrun, Transistor, etc.). Core gameplay starts with a view of the area’s top-down map and selecting the turn’s action taker. From there, the view turns to a third-person shooter.

The key difference compared to traditional third-person shooters is that the turn has an action-point meter, and each bit of movement eats up a little bit of this. When you’re in position, you select the turn’s action: shooting, healing, repairing, etc. This is all integrated smoothly and provides a unique perspective and feel for the turn-based genre. In fact, you’ll probably wonder why more games haven’t adopted this approach.

Once you’ve executed your action, you’ll be able to use remaining action points, so you can strategically move into a further position or cover. It’s also important to note that the enemy will be able to attack you when you get within a certain distance. Otherwise, they remain static.

Valkyria Chronicles puts a huge emphasis on story and character, and, as such, each character comes with his or her own set of natural buffs based on their background or role. In the field, characters are grouped into one of four sets: Troopers, Lancers, Medics and Engineers.

The RPG aspect comes into play with leveling up and adding skills as a group. Outside of individual buffs, this can feel somewhat homogenous, though it’s counteracted by the huge range of voiceovers and personalities you witness during combat.

Once you finish missions — which can be huge and certainly feel daunting to start — the game progresses the story with cut scenes, some of which can last 5-to-10 minutes. While the story is amusing and sometimes feels like a CG/anime hybrid, at other times the cut scenes can feel static and feature only talking heads against a background.

Remember how Metal Gear Solid used to have those long codec conversations with talking animated heads? You’ll get that here, which can be somewhat frustrating given that the gaming industry has moved beyond it. It’s one of the only real artifacts of its time that makes the game feel dated.

Despite some outdated technical aspects, it’s easy to see why Valkyria Chronicles gained such a huge cult following. Unique gameplay, beautiful artwork and an involving storyline makes for one of the best experiences of the PS3 era — and Remastered a welcome addition to the current one.

By Mike Chen
Tags: Gallia, Valkyria Chronicles, Valkyria Chronicles Remastered, Video Game Review, Welkin Gunther, World War 2
This entry was posted on Tuesday, May 10th, 2016 at 8:26 pm and is filed under Mike Chen, Video Game Reviews. You can follow any responses to this entry through the RSS 2.0 feed. Both comments and pings are currently closed.