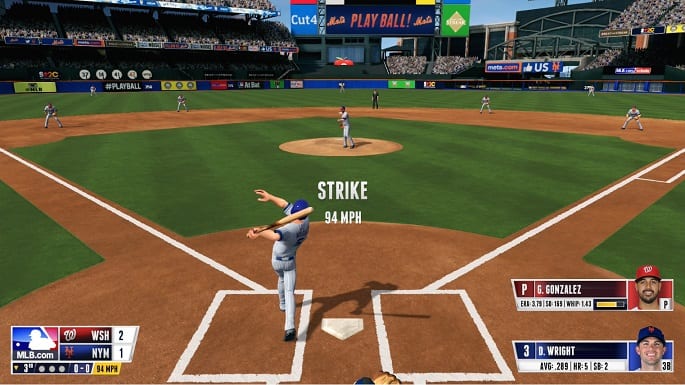 Visually, RBI isn’t even in the same ballpark as The Show.

While PlayStation gamers have been spoiled by access to the excellent MLB The Show series, for everyone else RBI Baseball ’16 represents your only chance to join the big leagues and “play ball!”

Graphics make quite a splash upon first inspection. They are smooth, polished and feature lots of team logos. The menus and scoreboards have the flashy look of a major league telecast.  Unfortunately, that’s where the polished professionalism ends. Ballparks and players look a bit rudimentary, and crowds look like flat cutouts in close ups. When they do move in the distance, it looks more like TV static than people.

The same thing happens with the players. They look flat and lacked the details we expect. For example, you’re (theoretically) looking at the faces of actual major leaguers. That isn’t exactly what we found. Except for slight variations in skin tone and a change of names on the uniforms, the players look pretty much the same. (Seriously, one Giants fan to another, who is Hunter Pence without the beard!?)

When a player hits a fly ball, a large yellow circle follows the ball and gives you an idea of where it is going to land. This graphic is in lieu of following the actual ball, which is odd because that’s usually where your eye would go in real life. Even when watching an MLB game on television, there’s no yellow circle to track — just the ball.

Once the ball is in play, a diamond pops up in the middle of the screen to show where players are currently positioned and where they are running. Again, this is a bit jarring because it takes your eye away from the main action (the ball!) to the location of all the players.

Also, while on the subject of graphics, when pitching you can move back and forth on the mound, but your player will have a ghostly drift or hover above the mound. No, he won’t actually walk or move in any natural manner across the mound. This is comically unfortunate.

In addition, we ran across our fair share of glitches. To continue with the ghostly theme, the ball rolled right through a couple of our players. There were also a number of times when players seemed to walk blithely across, on top of, or in direct contact with the ball but could not seem to pick it up.

Sound effects are well done at least. They help bring the stadium to life, and the crowd responses are well-coordinated with the action. A lively organist enhances the ballpark feeling by playing almost constantly without becoming repetitive.

The announcer’s voice is… nonexistent. Well, there’s a professional voiceover artist who states the umpire’s calls (e.g., safe, foul, out), but there’s absolutely no commentary or statistics given on a play. This is a serious loss because it really detracts from the feeling of being involved in an MLB game.

As easy as it is to locate a team, identify a roster and get the ball rolling (so to speak), RBI Baseball ’16 makes it overly complicated and frustratingly hard to truly master your first turn at bat.

When pitching, you control the speed, direction of the ball and location of the pitch. As a batter, you decide if and when you swing, as well as if you want to make it a pop up or a bunt. As a player, of course you can throw, run, hit, catch, fake a throw, dive, or wall catch.

There are bunch of other things you can do, but honestly we didn’t master many of the details because we found the gameplay lacking. During the drag time between the end of a play and when the pitcher was ready to go, we decided to run our player in circles around the base just for the fun of watching other players’ heads snap back and forth — because we found this more entertaining than the actual game.

On the list of positives, you can play with an MLB roster or create your own. You can also keep stats for a whole season or simulate a currently scheduled game. Local and online co-op are both available.

On the downside, well, there’s a lot missing here (customized controls, roster editing, play-by-play commentary… and the list goes on). There has also been a number of patches released to address glitches, so be on the lookout for updates throughout the season.

Why can’t baseball feel the love anywhere but on the PlayStation? Even three years into the series’ resurrection there’s a sad gap between RBI Baseball ’16 and The Show. Unfortunately, it looks like Xbox One owners need years of improvements before RBI can fill this void.