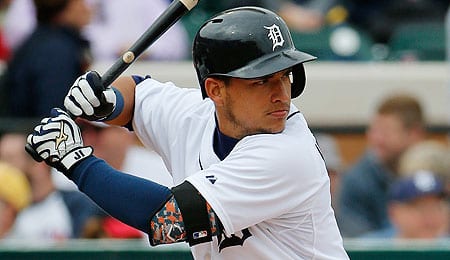 Jose Iglesias, SS, Detroit Tigers (ESPN: 6.4 per cent; CBS: 17 per cent): We recommended this defensive wizard last August as he was heating up down the stretch. Unfortunately, a broken finger cost him most of September. This season, Iglesias has hit the ground running, delivering hits in all four games, including three straight multi-hit efforts. Don’t expect much extra-base sock here, but if he can stay healthy, he’ll provide a .300 bat with solid on-base skills and some decent stolen base totals. Iglesias makes for a fine AL-only option that will really give you a boost in the BA department, but not offer much more.

By RotoRob
Tags: Detroit Tigers, Fantasy Baseball, Jose Iglesias, Kyle Schwarber
This entry was posted on Sunday, April 10th, 2016 at 11:55 am and is filed under BASEBALL, RotoRob, The Wire Troll. You can follow any responses to this entry through the RSS 2.0 feed. Both comments and pings are currently closed.