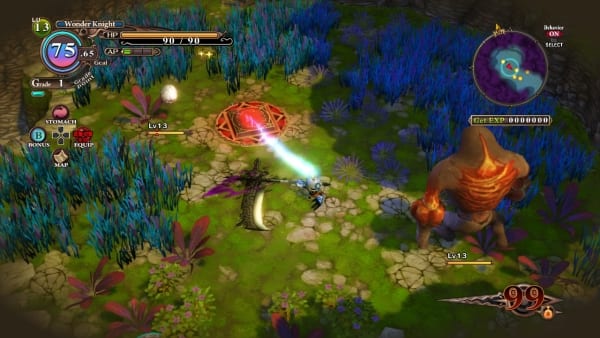 If you can think of any colour that isn’t in this game, let us know.

The Witch and the Hundred Knight: Revival Edition brings the PlayStation 3 game back from its grave with spiffed up visuals and reworked audio. As a demon summoned by a powerful but super-bitchy swamp witch, you’ll build your skills, explore colourful settings and ultimately try to prove to the witch that you aren’t just some dumb old demon.

As the Hundred Knight, you’ll slash and stab your way through various enemies using square. You can also dash about the environment by holding “X” and lock on to enemies by holding “R1.” Navigating the equipment menus is easy enough if a bit overwhelming at first.

Movement of the Hundred Knight is bound to the left stick, and it’s very responsive and snappy. You can also move the camera with the right stick to get a better glimpse at possible hidden paths or objects.

The Witch and the Hundred Knight: Revival Edition isn’t a technical ground breaker, but the graphics are very solid. Being that this game was originally released on the PlayStation 3, the visuals have really only received texture upgrades. This isn’t surprising at all, nor is it a bad thing because the wonderful environments and character animations are still top notch.

Words cannot describe how much we enjoyed the soundtrack of this game. It’s somewhat a fantasy gypsy vibe, with chilling and creative vocalizations. Listen to this whole tune and tell us it isn’t incredible.

Voice work is also splendid and entertaining throughout the game, even if Metallia is calling you and pretty much everyone else a dumbass most of the time.

As the Hundred Knight, you’re constantly bossed around by the brat witch Metallia, who is just as often hilarious as she is mean. To prove yourself to her, you’ll be shaking down civilians, intimidating their home towns, and defeating various monsters in an effort to spread her influence to the world around her.

Fighting your way to what is called a Swamp Pillar will generally result in a difficult battle, with your victory causing the Pillar to split open and throw swamp “pollen” everywhere. As you progress and backtrack your way through the game, more weapon varieties will become available, increasing the Hundred Knight’s efficacy.

Each stage is also (technically) timed. In order to secure your loyalty, Metallia has fitted you with a burning flame atop your head that, once extinguished, causes you to perish. This works its way into the game by causing every action you perform to deplete the flame meter, be it dashing away from an enemy or swinging a flurry of blows.

Sometimes you’ll find out too late that you were ill-equipped for a fight and end up having wasted too much energy, but that’s all just part of playing the game and learning the nuances of the enemy variants.

If you happen to become hung up in an area and find that the fighting is too difficult, there is something called the Tower of Illusion. Within the Tower there are waves of enemies to dispatch in order to find new gear and upgrades.

This feature was not in the original release, and it serves to reduce much of the grind associated with the PS3 version. While it certainly isn’t an earth-shattering addition, it’s a welcome feature for those with less available gaming time — or fans of the original release that are looking to just experience the game again.

The Witch and the Hundred Knight: Revival Edition is a great play for people who were fans of the original or even people that have never heard of it before. The warm, humourous environment and simple but deep mechanics of the game are ultimately rewarding.

By Jeff Cater
Tags: The Witch and the Hundred Knight: Revival Edition, Video Game Review
This entry was posted on Friday, March 4th, 2016 at 4:29 am and is filed under Jeff Cater, Video Game Reviews. You can follow any responses to this entry through the RSS 2.0 feed. Both comments and pings are currently closed.