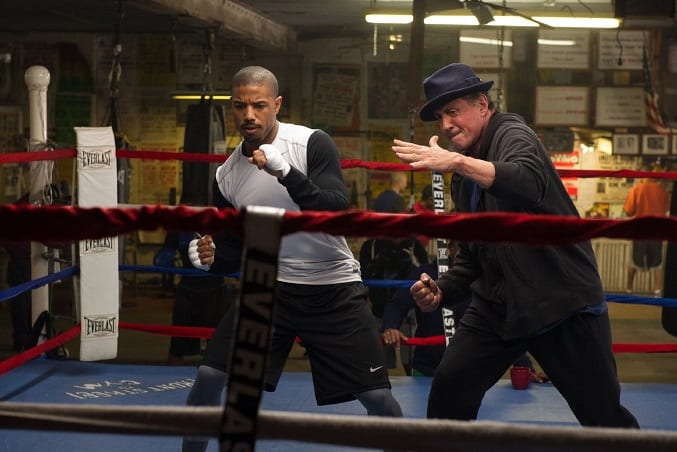 Stallone is a much better trainer here than in Rocky V.

If you could wind the clock back some 25 years and tell the good people of 1990 that Rocky V, a movie that was objectively terrible, wouldn’t be the end of the franchise they wouldn’t have believed you. Even 2006’s improbable return, Rocky Balboa, seemed like a swan song for Sylvester Stallone. Instead, Rocky is back to fight another round with Creed, a film that casts Stallone in the Burgess Meredith role and launches Michel B. Jordan into the mainstream.

Set roughly 40 years after the original Rocky, Creed introduces us to Adonis Johnson (Jordan), who is taken from a youth facility as a teenager by Mary Anne, the widow of Apollo Creed. It turns out Adonis is Apollo’s son from an extramarital affair, and his mother was pregnant with him when Apollo was killed in the ring by Ivan Drago.

In the present day, Adonis has just been promoted within the financial institution for which he works, but his true love is boxing — he’d been sneaking off to Mexico for fights — and decides to quit his job to pursue the dream of being a professional fighter. Shunned by Mary Anne and chased out of the gym by Tony Evers (Wood Harris; The Wire), the son of Apollo’s trainer Duke, Adonis packs up and heads to Philadelphia in search of Rocky.

Initially, Rocky is hesitant to train Adonis. His resistance softens quickly, however, due in no small part to his feelings of guilt over Apollo’s death some 30 years earlier. Both men want to take things slow, with Adonis using the last name Johnson in an effort to build his own legacy. When the world learns he’s the son of Apollo Creed, though, he’s offered a huge opportunity to face the undefeated light heavyweight champion, “Pretty” Ricky Conlan.

As with the original Rocky, it’s the established champion taking on the upstart, but can Creed win where Balboa was beaten?

One of the glaring omissions that sparked the Oscars controversy had to be that of Jordan, who does a fantastic job as Adonis Creed. He has been on our radar for a long time — ever since he was Wallace in Season One of The Wire — and his continued growth can be seen here. Jordan does a great job of creating a new, compelling character, both in and out of the ring. His physique and obvious dedication to learning the motions of a boxer add to the film’s authenticity.

Despite losing out in his bid for a Best Supporting Actor Award, Stallone does his best work in living memory with the character that made him a household name. He looks, talks and acts like someone that has been worn down by life, losing so many important people along the way. We’ve enjoyed quite a bit of Stallone’s recent work (Expendables, Escape Plan), but most of that has been nostalgic. This is legitimately strong acting.

As a continuation of an iconic franchise that looked dead in the water for well over a decade, Creed does about as good of a job as could be hoped for. It weaves in nods to the past, creating a natural link between the original films and this, while also establishing new characters strong enough that this figures to be the start of another multi-title series. Hell, they may have even introduced the antagonist for Creed 2 in the film’s first 30 minutes.

As hardcore sports fans, we often find sports movies difficult to watch because they tend to struggle with capturing that authenticity — for instance the scene in which Hilary Swank is paralyzed in Million Dollar Baby is so absurd it ruined the movie for us. While Creed doesn’t have anything like that, it does fall into the Rocky trap of having approximately 50 times as many power shots as any real fight.

Sure, it’s understandable when you see how often real super fights underwhelm (Floyd Mayweather Jr./Manny Pacquiao, anyone?), but when they bring the cameras into the ring for some slickly choreographed action it sort of stands out. We mean, cuts in every first round? An eye so swollen it would result in a fight being stopped 10 times out of 10? Yeah, it’s used for dramatic effect, but it’s a little much.

Approximately 20 minutes of deleted scenes highlights a quality showing of extras. There’s nothing that absolutely should’ve been left in, but the scene of Adonis calling Mary Anne about the use of the Creed name and him visiting his father’s trophy room are both pretty cool. A featurette on how Creed came about as well as how it ties into the Rocky legacy is worth watching, too.

It’s impressive that someone could take a series that began in the mid-’70s, retain its history and create something relevant that wasn’t a full-blown reboot. While it isn’t a perfect film by any means, Creed still deserves huge credit for what it was able to accomplish.

By HC Green
Tags: Blu-ray reviews, Creed, Michael B Jordan, Rocky, Sylvester Stallone
This entry was posted on Wednesday, March 2nd, 2016 at 2:20 am and is filed under Herija Green, Movie Reviews. You can follow any responses to this entry through the RSS 2.0 feed. Both comments and pings are currently closed.