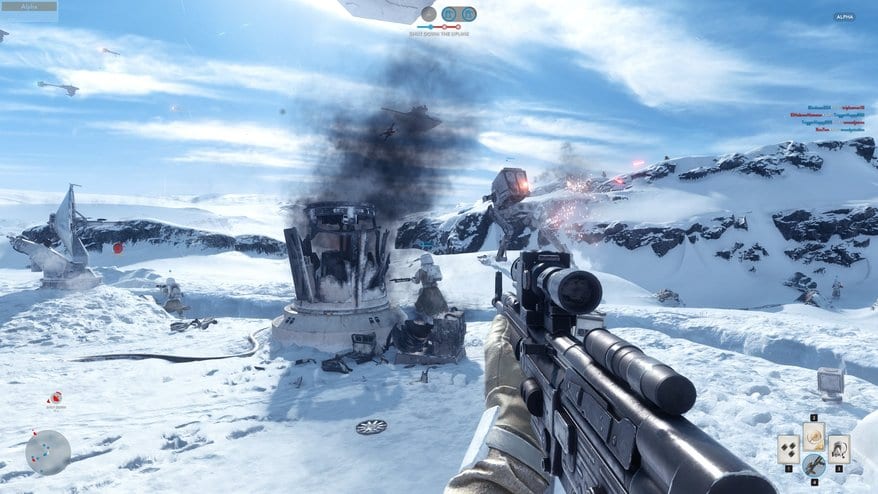 Yes, the game looks absolutely amazing. Even when it doesn’t.

It’s been a long, long time since any of us had a taste of true intergalactic warfare. DICE hopes to remedy this with Star Wars Battlefront. While it uses the Battlefront moniker, it’s realistically a reboot rather than the third game in an established series. Did DICE do justice to that galaxy far, far away? Only one way to find out.

One thing that DICE has made incredibly clear is that it wants as many people to play this game as possible. This is completely evident from how tight the controls feel from the moment you first step onto the field of battle, even when using the default settings.

Although the game feels so much like Battlefield, we had to get used to the fact that “X” was only a jump button this time around and not jump/clamber over obstacles. We also found switching to the secondary control setting, which swaps melee and crouch, to be much more comfortable. Otherwise we would often throw an accidental punch and get our heads taken off.

While on foot, your shoulder buttons will activate your chosen Star Cards, like a thermal detonator or personal shield. While in the seat of a TIE Interceptor or A-Wing, the shoulder buttons will trigger a significant speed boost or missile launch. The same goes for stomping around in an AT-ST. Ultimately, the vehicles all control very similarly.

You can close your eyes and imagine some of the most vivid battles you could think of, and it still probably wouldn’t look as amazing as Star Wars Battlefront. The character detail is absolutely insane, with small burns and dirt caking the armour of Stormtroopers or the floppy braintails of the Twi’Lek soldiers.

Environments available to battle in are positively breathtaking, with the forest moon of Endor being an absolute highlight… moss sways gently in the breeze, a small creek reflects each and every laser bolt that tears through the canopy and even the plants swing and react realistically to your presence (and even momentum).

TIE Fighters scream overhead, locked in a battle of red and green searing bolts that pierce the sky. AT-ATs unload on choke points, calling in orbital bombardments. Luke and Vader lock sabres and do the dance of the Force. All of this happens at 60fps with no noticeable drops, ever. Star Wars Battlefront is one of the most visually tight packages we’ve ever seen grace consoles.

Of course, all of this action is accompanied by the marvelous musical pieces of Star Wars. There’s nothing quite like finding the Hero Power-Up, choosing Darth Vader, and hearing the Imperial March announce your presence to the server. Oh God, there’s even Wilhelm-Screams everywhere!

In this iteration of the series, DICE decided to forego a campaign and focus entirely on a multiplayer experience to remember. We are some of the few that support this decision, as through the entire history of Star Wars games and films, there really is little that DICE could’ve done that hasn’t been done to death before.

That being said, there are indeed a few single-player challenges that can also be done in split-screen (!) with a buddy. They don’t offer much (any?) depth, though, and the experience does indeed pale in comparison to the multiplayer setup.

First up is Walker Assault, the one you’ve likely seen the most of. In WA, you’ll either be pushing the frontlines to their limit as an Imperial soldier tasked with protecting the AT-AT or controlling the Rebellion that must stop the AT-AT at all costs.

Various power-ups will be scattered around that will allow players access to special weapons and vehicles, such as an AT-ST or TIE Interceptor. Often the Rebels will have a Snowspeeder at their disposal, which allows you to recreate the task of downing an AT-AT with your tow cable.

There is indeed some balancing issues on each of the four available maps for this mode, though, which tend to favour the Rebellion outright — even though the Rebels must activate two beacons to call in Y-Wing bombers to take down the shields of the AT-ATs.

Next we have Supremacy, which is the Conquest mode of Battlefront. Each team is caught in a push/pull battle, trying to take over control points in a linear fashion. The fighting will usually only be taking place between two sets of points at any given time, but get the right flank on the opposition and open up a Jedi-sized can of whoop ass.

In Hero Battle each player will get a turn playing as a randomly-selected hero or strap on the boots as a regular soldier. It’s great fun slicing through Stormtroopers as Luke or running your smuggler ass off as Han Solo, but the absence of any in-game chat makes truly awesome hero plays pretty rare. Fight until the heroes on the enemy team are all eliminated, and get ready for the next heart-pounding round.

The other six modes, while highly playable, tend not to offer the thrills of the above game types. The other mode that really sticks out is Fighter Squadron, which is a purely aerial battle that is intense, but at this time it’s currently dragged down by the decisions about the Hero ships. If someone hops into the Millennium Falcon or Slave I, they’re pretty much going to wipe the skies unless literally the whole team jumps on them. The health of these Hero ships is too damn high!

Star Wars Battlefront is one of the best multiplayer shooters in recent history, but some of the effort put into the lesser-played modes could’ve been redirected to the more central parts of the game. Why have nine multiplayer modes when only about four actually offer a really memorable time? Outside of some minor issues, however, what we have is an incredibly accessible, simple and thrilling take on the battles we’ve grown up with. Dare we say, the force is strong with this one.