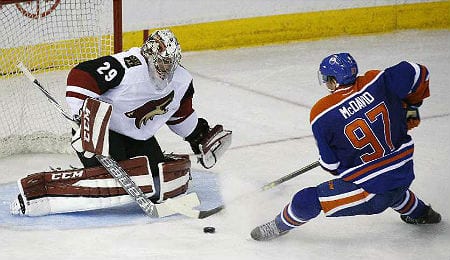 Anders Lindback isn’t likely to revive his career with the Coyotes. (Edmontonjournal.com)

In continuing our look at the key free agent signings this summer, we wrap up the goalies with an analysis of the Anders Lindback contract.

Analysis: We’re not really huge fans of Lindback and wished the Coyotes went for a goalie that has a better chance of turning into trade bait like they did with Devan Dubnyk. We also would have been more excited about this signing if Goaltender Coach Sean Burke hadn’t left the organization.

Fantasy Impact: As stated above, we believe Lindback’s success in the desert was contingent on Burke staying with the Coyotes. If Burke didn’t leave, we could have seen Lindback posting better numbers, but now that the goaltending coach is gone, we expect more of the same from Lindback (in Buffalo last season, Lindback did post solid numbers — and proved capable of making game-saving saves, as you can see in the video below — but his career numbers leave a lot to be desired). Early in his career, Lindback actually posted some solid numbers on the Predators with a .915 save percentage in 2010-2011 and a .912 save percentage the following season.

Overall, we think his 15 game-stint in Buffalo was an anomaly, so we’re expecting similar numbers to those he posted in Tampa and Dallas.

Update: As of November 1, Lindback is off to a very nice start. Through three games (one start), he has one win, a 1.65 GAA and a save percentage of .935. On Friday, Mike Smith, who got off to an amazing start but has since cooled, was pulled in favour of Lindback after giving up two goals on three shots. If this trend continues, Lindback could see much more PT than we projected.

Now it’s your turn. Let us know in the comments below how you think Lindback will fare this season.

By Scott Maran
Tags: Anders Lindback
This entry was posted on Sunday, November 1st, 2015 at 1:04 pm and is filed under Free agents, HOCKEY, Player profile, Scott Maran, Transactional analysis. You can follow any responses to this entry through the RSS 2.0 feed. Both comments and pings are currently closed.