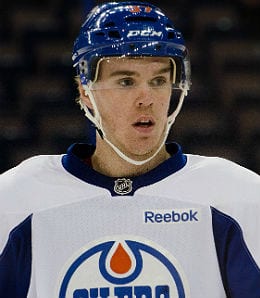 Fantasy owners are going to enjoy the ride Connor McDavid takes them on this season. (en.wikipedia.org)

[Editor’s note: a special welcome back to Dakota, who, having had to deal with unthinkable health issues, has proved himself one of the most courageous people we are honoured to know!]

After a long hiatus it is so, so good to be back with you all here at RotoRob.com! It’s mid October, the NHL’s regular season is underway and several candidates have already begun to separate themselves from the pack as potential Fantasy hockey All-Stars.

The 2015-16 season will long be remembered for the debuts of generational talents Connor McDavid (three goals, four points — small wonder former Oiler great Mark Messier was keeping tabs on this young stud as you can see in the video below) and Jack Eichel (two goals), but could another young phenom come away with the Calder Trophy at season’s end? Chicago’s Artemi Panarin (two goals, seven points), Detroit’s Dylan Larkin (two goals, six points), Arizona’s Max Domi (three goals, six points) and Anthony Duclair (four goals, six points), and the New York Rangers’ Oscar Lindberg (four goals) headline an impressive crop of rookies already making its mark on the league. The race for “Rookie of the Year” will certainly be a tight one.

Believe it or not, some of the youngsters above may also be the best bets on your league’s waiver wire. With that said, we move on to this week’s Fantasy hockey recommendations.

Ales Hemsky, RW, Dallas Stars (ESPN: 20.3 per cent; CBS: 32 per cent): With names like Tyler Seguin, Jamie Benn, Jason Spezza and Patrick Sharp on the roster, it’s easy to see how a guy like Hemsky might get overlooked by most. Don’t be that guy. The former Oiler could be on track for his best season yet with a goal, six points, a plus-3 rating, two penalty minutes, a power play goal, 11 shots on goal, two hits and three blocked shots in five games with the Stars. If he keeps it up, Hemsky could be the steal of the season in your Fantasy league.

Matt Beleskey, LW, Boston Bruins (ESPN: 39.7 per cent; CBS: 45 per cent): Looking for a hard hitter that can also provide some secondary scoring power? Look no further than Beleskey. One of the newest citizens of Beantown, the former Duck has a goal, two points, a minus-3 rating, two penalty minutes, four shots on goal, three blocked shots and 22 hits (second in the NHL) in just five games this season. Dougie Hamilton and Milan Lucic are gone, captain Zdeno Chara and Patrice Bergeron are aging and goaltender Tuukka Rask is struggling, as is the rest of the Boston lineup. However, the big, bad Bruins are coming off a two-game road sweep and things finally look to be moving in a positive direction. If Boston is going to get back into the postseason where it belongs, count on Beleskey to make an impact — the Bruins are. Note that we did an in-depth profile of Beleskey recently.

David Desharnais, C, Montreal Canadiens (ESPN: 7.7 per cent; CBS: 27 per cent): Carey Price and the Habs just can’t seem to lose! While the reigning Hart Trophy winner is a big reason why, credit also has to be given to the rest of the team, including Desharnais. In six games, he has a goal, five points, two penalty minutes, a power play goal, 10 shots on goal, three hits and two blocks. Montreal is due a loss any game now, but could it be the first Canadian team to win the Stanley Cup since it did so back in 1993?

John Mitchell, C, Colorado Avalanche (ESPN: 4.6 per cent; CBS: 3 per cent): Tomas Plekanec, Zach Parise… John Mitchell? One of these is not like the others. The Avs currently occupy the Central’s cellar, but don’t fault Mitchell — he has four goals, a plus-1 rating, eight shots on goal, two hits and four blocked shots. There’s no question his scoring won’t live up to his current pace, but keep tabs on him all the same.

Zbynek Michalek, D, Arizona Coyotes (ESPN: 1.4 per cent; CBS: 5 per cent): Arizona is off to a surprising start for a team predicted to be the front runner in 2016’s “Auston Matthews Sweepstakes.” The ‘Yotes currently sit in third in the Pacific with three wins and six points in five games. Now, credit has to be given to Arizona’s devilishly dynamic rookie duo of Domi and Duclair, and revitalized goaltender Mike Smith, but consistent, sound defense has been rediscovered in the desert, and Michalek has been a key part of that with a goal, two points, a plus-3 rating, two penalty minutes, three shots on goal, 11 hits and 11 blocked shots in four games. He’ll never be a regular offensive threat on your blueline, but will contribute nicely in plus-minus rating, hits and — more importantly — blocked shots.

Fantasy Dark Horse: Keep your eyes on Minnesota’s Jared Spurgeon. A diminutive rear guard at 5’9″, and a former New York Islanders cast-off, the “Surgin’ Spurgeon” has established himself as a legitimate top-four defenseman both with the Wild and throughout the league. Partnered with Marco Scandella last season, Spurgeon now finds himself skating alongside Ryan Suter on Minnesota’s top defensive pairing. Spurgeon has zero points, a minus-1 rating, two shots on goal and just one hit, but his total of 13 blocked shots is among the best in the league and the offense will come once he adjusts to his new role.

By Dakota Case
Tags: Ales Hemsky, Dallas Stars
This entry was posted on Sunday, October 18th, 2015 at 4:45 pm and is filed under Dakota Case, HOCKEY, The Wire Troll. You can follow any responses to this entry through the RSS 2.0 feed. Both comments and pings are currently closed.