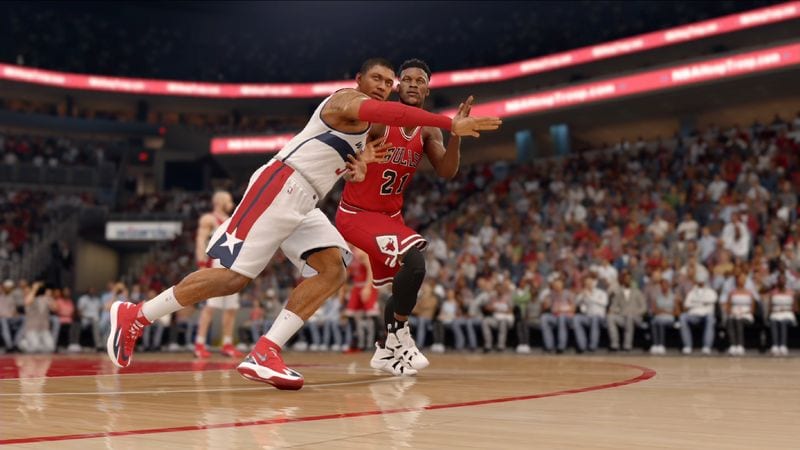 Despite this image, defense is a rarity in Live ’16.

We’re now entering Year Three of EA Sports’ foray back into the world of digital hoops as NBA Live ’16 once again assumes the underdog mantle in its ongoing battle with the juggernaut NBA 2k series. With time to see what worked and what didn’t, gamers will be looking for more meaningful progress from EA. Will they get it? Let’s tip it off and find out.

Schematically, NBA Live ’16 is well laid out. Dribble and post moves are tied to the right stick and/or “Y” button with the right trigger used as a sprint/aggression modifier. Passing is split between direct or line of sight passing (“A”) and icon passing, whereby tapping the right bumper brings up icons over your teammates and you select your target by pressing the corresponding button. Shooting is improved over last year as well, thanks to a new shot meter that offers valuable feedback.

Defensively, you can block, steal, attempt to take charges and the like, with the left trigger activating a “defensive assist” mode that’s designed to help you slow down the opposition. None of it is particularly effective, however, and the CPU gets to the rim far too often no matter how sound your positioning looks to be or how talented a defender you’re theoretically controlling. It’s basically a tick or two above what you see at modern All-Star Games.

You’re welcome to post up with specific back-to-the-basket commands or employ the playcalling wheel, but it never feels necessary because offences dominate defenses. Why bother pounding the ball into the low block when your point guard can beat his defender off the dribble most times down the court? Plus, rebounding is a total crapshoot, which helps turn pretty much every game into a shootout.

Also of note is the frequent feeling of hesitation between input and execution, and that doesn’t even take into account how many times a pre-canned animation takes hold of your defender rendering you even more helpless to watch what you know will be two more points. While there are some minor improvements over last year, there’s still some significant work to be done here, primarily in the defensive and rebounding areas.

Live ’16 is capable of looking really good, though it’s not consistent in that regard with the game’s more notable players seeming to have received more care than others. The ESPN license is used effectively, and the creation of that TV broadcast vibe is one of the highlights of Live’s presentation — that includes the enjoyable halftime/post-game shows that recap some of the game’s best plays. Animations can be a bit clunky but not to the point that it really pulls you out of the experience.

Commentary is once again handled by Mike Breen and Stan Van Gundy with Jalen Rose on the halftime and post-game shows. Breen and Van Gundy do a decent job delivering their lines, but they don’t offer much in terms of depth and ultimately bring little to the table. Rose is pretty bad. Ambient sound is a mixed bag as well. It can feel immersive when the crowd is roaring, but when things isolate (like during a chant) it sounds completely inauthentic.

Dynasty and Rising Star are once again the main attractions in NBA Live ’16, and both reflect the overall feel of the gameplay in that they’re largely enjoyable yet limited in their scope. With Dynasty you’ll control a franchise of your choosing, guiding them through seasons, trading and drafting players, and so on. Games can be played or simulated, and those that value statistical accuracy should at least be reasonably pleased by the sim results.

There’s little context to be found, however, with a news wire providing the only real semblance of a feeling that there’s an NBA season going on around you. The whole thing feels scaled back relative to other modern sports titles, perhaps in an effort to cater to more casual fans.

Rising Star, Live’s primary single-player mode, feels like a bit of a relic to an era when sports games used a very simple formula: play games, earn experience and improve your attributes. It’s fine, as long as you’re willing to adopt a specific approach to games (you first, team second) to keep your grade up and your player ascending the ranks.

On the bright side, Rising Star feeds into the new online modes Live Run and Summer Circuit. The former throws you and up to nine other players into a 5-on-5 showdown on the blacktop where you’re likely to find lots of offense and modest amounts of teamwork. Summer Circuit has some similarities to the old NBA Street games, having you and a co-op partner team up to face increasingly tough A.I. opponents. It’s better in concept than execution, however, mostly due to the unfair A.I. as you progress.

Traditional online head-to-head gameplay is available as well, and as long as you’re playing with a decent connection the matchups tend to feature minimal lag. It’s one area that Live does a better job than its competitor. And for those that enjoy it, Ultimate Team makes its appearance here as well, challenging you to earn player cards to assemble your unique squad.

Slow and steady seems to be EA Sports’ approach, and while there are a couple of setbacks, the NBA Live ’16 package as a whole feels like another step in the right direction.

By HC Green
Tags: EA Sports, NBA Live, NBA Live 16
This entry was posted on Thursday, October 15th, 2015 at 3:52 am and is filed under BASKETBALL, Herija Green, Video Game Reviews. You can follow any responses to this entry through the RSS 2.0 feed. You can skip to the end and leave a response. Pinging is currently not allowed.