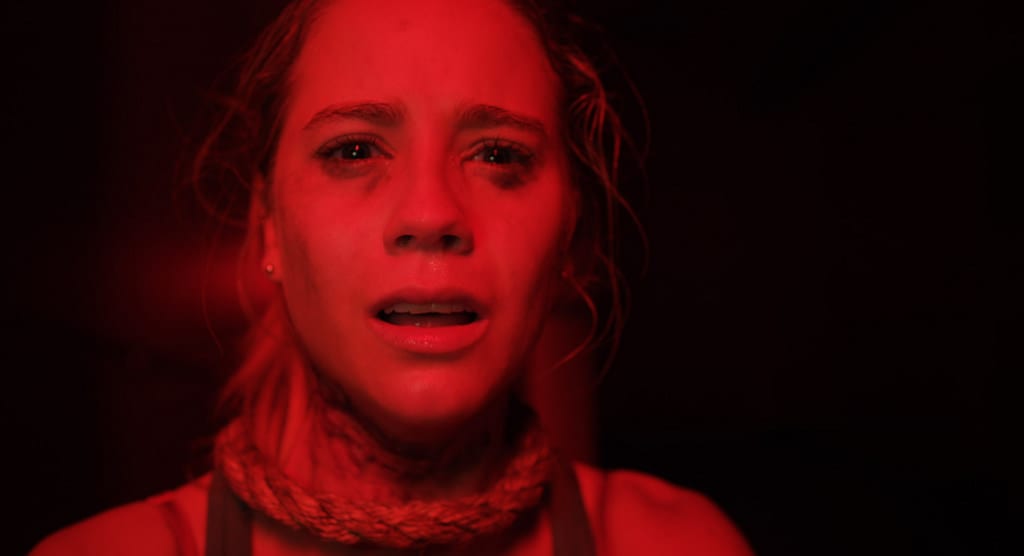 If only it were Kathie Lee…

If we were to list our favourite types of movies in order, it would take a while to reach horror. It tends to be a very formulaic genre, relying too heavily on jump scares and clichés. For every one that stands out for being different (The Cabin in the Woods) or legitimately disturbing (The Ring, It Follows), there are a dozen or more that seem interchangeable. The Gallows, a low-budget “found footage” flick in the same vein as The Blair Witch Project, is definitely one of those that fits into the latter category.

Twenty years after an on-stage accident claimed the life of a student, Beatrice High School is once again putting on a production of The Gallows, which had been eliminated in light of the tragedy. The driving force behind the revival is the play’s lead actress, Pfeifer (Pfeifer Brown). She’s joined by football player turned porous actor Reese (Reese Houser), who is the male lead opposite Pfeifer.

Documenting the entire experience leading up to the play is Ryan (Ryan Shoos), a friend of Reese who is apparently only taking the class as a requirement. With the play set for its first performance and Reese still struggling to learn his lines, Ryan comes up with the idea to sneak into the school after hours and trash the stage. While Reese is apprehensive, he finally agrees based on Ryan’s insistence that the event will drive Pfeifer, whom Reese has a crush on, to him for comforting.

Ryan and Reese are joined by Ryan’s girlfriend, Cassidy (Cassidy Gifford — daughter of Frank and Kathie Lee), but when the door they entered mysteriously locks behind them they end up running into Pfeifer and coming clean about their purpose. Now, trapped in the school, the foursome must find a way out while being pursued by someone… or something.

Found footage films always have one thing working for them: the pseudo first-person perspective of seeing things play out through what the character “sees” is inherently creepy. The film plays this to the hilt with lingering shots into darkened areas, creating the expectation that when they look back they’ll be face to face with the killer. While some of it is a bit much — the cell phone night vision stuff that’s used to fill in some blanks is iffy — it’s an effective way to build tension.

We’re big proponents of less is more when it comes to actually encountering the antagonist in horror films, and The Gallows does a good job of limiting your exposure to “The Hangman.” In fact, we’re not sure you catch so much as a glimpse in the first 50 minutes of an 80-minute film. He’s equal parts shadowy figure and apparition as well, which makes for some scary moments.

It’s a completely anonymous cast, which is fine, but character development is sorely lacking. There are only four people trapped in the school (a low number for a horror flick), but every single one of them is underdeveloped at best or unlikable at worst. If you’re going to have a very low body count for this type of movie it’d be good if we at least cared about the people it was happening to. We didn’t.

There’s a rather substantial set of extras, highlighted by the original version of The Gallows. It’s kind of interesting to see how some things were altered while others were basically identical. The biggest change is that the actress that played Ryan’s girlfriend was replaced by Gifford, who is considerably thinner. Word is the original actress lost a bunch of weight so they couldn’t use her for re-shoots, but, uh, we mean, by hiring someone new didn’t you have to re-shoot it all anyway?

Beyond that, there are also a number of deleted scenes — some of which are actually pretty solid — and a few less interesting featurettes.

While The Gallows creates some tension and smartly follows the “less is more” philosophy for showing The Hangman, it’s also highly derivative of other works and does little to foster interest in the story.

By HC Green
Tags: Blu-ray reviews, The Gallows
This entry was posted on Monday, October 12th, 2015 at 1:37 pm and is filed under Herija Green, Movie Reviews. You can follow any responses to this entry through the RSS 2.0 feed. Both comments and pings are currently closed.