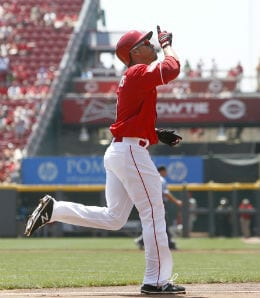 Ivan De Jesus is back in the Show and even flashing some pop. (David Kohl-USA Today Sports)

It’s mid-June, and injuries seem to be mounting by the minute around Major League Baseball. Fortunately, RotoRob.com is here to help what ails your Fantasy world. Below are some players quietly producing that could come through in a pinch for you.

Ivan De Jesus, 2B, Cincinnati Reds (ESPN: 2.4 per cent owned; CBS: 2 per cent owned): Prior to this month, journeyman De Jesus had not appeared in a Major League game since 2012 and had not recorded a hit since 2011. But with Zack Cozart now on the shelf and Brandon Phillips banged up, De Jesus has come up big for the Reds, with a pair of home runs (one of which was called by the legendary Ron Burgundy — see video below) and six runs batted in in his first five games. He’ll get regular playing time for the time being, so he’s worth a look.

Mitch Moreland, 1B, Texas Rangers (ESPN: 20.6 per cent; CBS: 35 per cent): It’s hard to believe that Moreland, who would be a great Fantasy pickup, has such low ownership totals. No longer in a platoon situation as first base because Prince Fielder is primarily a DH, Moreland has been raking of late, with six multi-hit games in June and eight homers overall.

Matt Andriese, SP, Tampa Bay Rays (ESPN: 0.3 per cent; CBS: 1 per cent): The Rays are the walking wounded when it comes to their pitching staff, with Jake Odorizzi being the latest victim. That means Andriese, who impressed in long relief earlier this season, could benefit with some more starts. He did not permit an earned run against the White Sox on Friday in 5 2/3 innings and picked up his first Major League win.

Tyler Lyons, SP, St. Louis Cardinals (ESPN: 1.6 per cent; CBS: 2 per cent): The Cardinals are also being bitten constantly by the injury bug, as a DL trip for Lance Lynn means the southpaw Lyons will get a few starts in his absence.

Kevin Correia, SP, Philadelphia Phillies (ESPN: 0.5 per cent; CBS: 1 per cent): You would think journeyman Correia would need an injury to another starter to earn another shot at starting, but the Phillies are bad enough that they are desperate for any help they can get at this point. Correia pitched very well in his first start of 2015, going 5 2/3 shutout innings for a no-decision.

Travis Snider, OF, Baltimore Orioles (ESPN: 2.4 per cent; CBS: 12 per cent): Snider is trying to get more regular playing time for the O’s, as his bat is heating up somewhat. He plays primarily against right-handers in a platoon with Delmon Young, but the more comfortable he gets at the plate, the more time he’ll see.

Alejandro De Aza, OF, Boston Red Sox (ESPN: 2 per cent; CBS: 6 per cent): There was a time when it seemed like the Red Sox had a surplus of outfielders, but they grabbed De Aza off waivers from the Orioles and have given him more playing time than he was getting in Baltimore. He has speed and shows occasional power, and with Mookie Betts nicked up after a collision with the wall, De Aza could get regular PT for now.

Francisco Cervelli, C, Pittsburgh Pirates (ESPN: 19.1 per cent; CBS: 37 per cent): The former Yankee backstop has had some big hits for the Buccos this year and is currently hitting a robust .319. He has emerged as a viable every day starter.

Jose Urena, SP, Miami Marlins (ESPN: 1.1 per cent; CBS: 3 per cent): Jose Fernandez will be back in action soon, but for now, Urena is holding down the fort in Miami, with two straight solid performances against the potent Colorado Rockies’ offense.

Mason Williams, OF, New York Yankees (ESPN: 1.2 per cent; CBS: 4 per cent): Williams made quite an entrance Friday, homering in his MLB debut for the Yankees. The highly-touted prospect will get a shot with Jacoby Ellsbury still out for another two or three weeks.

Juan Lagares, OF, New York Mets (ESPN: 10.2 per cent; CBS: 18 per cent): Lagares racked up the steals in the minors, but we’ve haven’t seen the same kind of speed numbers from him in the majors, but he’s hit safely in nine of his last 10 to raise his BA 20 points. If you need BA help, with a sprinkling of steals and homers, give him a look.

Francisco Lindor, SS, Cleveland Indians (ESPN: 14.8 per cent; CBS: 48 per cent): Our No. 10 prospect has arrived. Judging by his 90 total bases in 57 games at Triple-A, he’s grown offensively this year, but keep your expectations modest. Still, Lindor will play every day, so he’s worth adding to see how he adjusts to the bigs.

Hansel Robles, RP, New York Mets (ESPN: 0.1 per cent; CBS: unowned): Robles has a tendency to get in trouble from time to time, but he’s tossed shutout ball in six of his last seven outings and has four holds over the last 10 days, so if you have a need in a very deep NL-only league, he can help. Still, we want to see him pitch to Yasmani Grandal (as in Hansel to Grandal). Okay, that was lame.

By Michael Seff
Tags: Cincinnati Reds, Ivan De Jesus
This entry was posted on Sunday, June 14th, 2015 at 6:17 pm and is filed under BASEBALL, Michael Seff, The Wire Troll. You can follow any responses to this entry through the RSS 2.0 feed. Both comments and pings are currently closed.