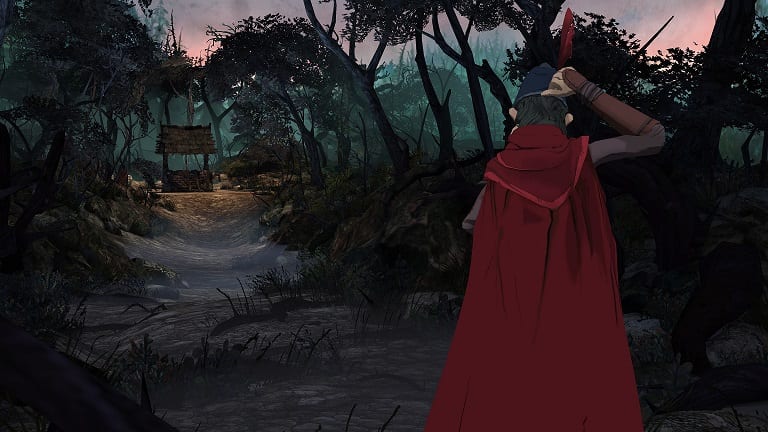 If you’re unfamiliar with the work of Ken and Roberta Williams it’s fair to say you’ve missed out on a significant piece of gaming history. Their King’s Quest series set the bar for graphic adventure games, and the company they founded, Sierra On-Line (now Sierra Entertainment), published other classic series like Space Quest, Police Quest and, of course, Leisure Suit Larry.

It has been 17 years since we’ve been treated to a new King’s Quest game, but following Activision’s resurrection of the Sierra brand, the long wait has ended. Developed by The Odd Gentlemen, the team behind the underrated The Misadventures of P.B. Winterbottom, the new King’s Quest is set to be released in five pieces, starting with Episode 1, A Knight to Remember.

Most of your time will be spent moving Graham around the environment, deciphering how to interact with objects/people to proceed. When walking you’ll see a button prompt in the corner that allows you to bring up your inventory. A second prompt will be added when you’re close to something you can interact with. During these moments you’ll have the option to grab an item from your inventory, which causes you to try to use that item on your current target.

For example, when coming upon a tree, simply interacting with it might cause you to shake or slam into it, whereas opening your inventory and selecting a hatchet will chop it down. That’s a very basic set of circumstances, but A Knight to Remember wants you to try all kinds of different combinations to see what happens — in fact, many achievements/trophies relate to failed experimentation within this core concept. Repeatedly interacting with objects leads to additional dialogue as well.

There are some isolated action sections sprinkled throughout the episode, focusing either on some very forgiving first-person bow shooting or Quick Time Events (QTEs). They aren’t great, but this isn’t meant to be an action game, and adding moments that carry extra urgency offers welcome respites.

Hand-painted backgrounds set the mood perfectly, depicting a gorgeous world that meshes with the 3D characters and their exaggerated animations. Graham’s appearance is a delightful throwback to the original series with his signature cap and a flowing red cape. As with the story itself there’s an alluring blend of whimsy (“unicorns”)and danger (dragons, wolves) that allows everything to maintain a hard edge even as absurd things are happening.

Even better than the graphics are the performances of the voice actors. Christopher Lloyd does a wonderful job as the old Graham, who basically serves as the game’s narrator, and Josh Keaton is strong as his younger self. The highlight, though, has to be the appearance of Wallace Shawn, whose work should give any self-respecting Princess Bride fan a nostalgia rush — he doesn’t say the line, however, which is inconceivable!

A Knight to Remember is framed as an aged King Graham regaling his granddaughter, Gwendolyn, with stories of his adventures as a younger man. A brief prologue featuring a one-eyed dragon familiarizes you with the situation, and the remainder of the episode focuses on Graham’s arrival in Daventry to take part in a tournament to establish a new knight.

It’s a clever angle, one that will allow the four remaining episodes to jump freely around the timeline, changing locations and introducing new characters at will along the way.

Although we don’t see any significant ripples, the clear focus on having you select a specific path (wisdom, bravery or compassion) suggests they’re forthcoming. And how you choose to deal with the tournament’s first task is immediately reflected in how the merchants you encounter react to you as each one has an opinion on how you should handle it.

While the original games required you to enter text (and eventually point and click), the new King’s Quest manages to update the formula and still feel connected to it. The game also honours its old-school roots by eschewing modern conveniences: there’s no map to refer to and no instructions on where to go or what to do next. As much as we love the source material, and the developer’s relative adherence to it, this does lead to a lull in the middle section.

That’s because much of your time will be spent trying to piece together what’s expected of you, which potentially means a lot of wandering, backtracking and experimenting. There are no true brain teasers in the game’s puzzles, and the world isn’t so big that you’re apt to get lost, but it can still take a long time to figure out some of the more obtuse actions. This isn’t a TellTale episodic, either, so you can expect to spend better than five hours making your way through A Knight to Remember.

Failure isn’t really an option, and the game takes a page from The Sands of Time in which deaths and mistakes are explained away by Graham saying he misremembered or something along the lines of, “And that’s what would’ve happened if I’d done X.” Checkpoints are plentiful, so you’ll rarely be forced to replay meaningful amounts, though the inability to skip dialogue you’ve already heard can get old. Along those same lines, the frequent (albeit brief) load screens become tiresome.

Successfully toeing the line between referential and modern, A Knight to Remember is a highly enjoyable adventure game and a encouraging first chapter in the resurrection of King’s Quest.

By HC Green
Tags: A Knight to Remember, King's Quest, Video Game Review
This entry was posted on Saturday, August 1st, 2015 at 4:26 pm and is filed under Herija Green, Video Game Reviews. You can follow any responses to this entry through the RSS 2.0 feed. Both comments and pings are currently closed.