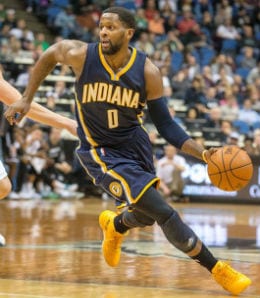 C.J. Miles may have been your saviour in the playoff. (Jesse Johnson-USA Today Sports)

Now that the NBA season is done, it’s time to look back at some of our bigger hits from The Wire Troll. Hopefully, you were able to ride some of these picks to victory.

Jordan Clarkson, PG, Los Angeles Lakers: Clarkson was a great pick up down the stretch. In the 31 games after we recommended him, he averaged 17 points, five assists and five rebounds in 32 minutes. Not only did Clarkson help you down the stretch, but if you picked him up in a dynasty league, he has the potential to be the next Chandler Parsons. The Lakers have high hopes for their rookie guard.

C.J. Miles, SG, Indiana Pacers: Miles, who has always had some serious skill (see video below), went the distance over the past month of the season. He had back-to-back 25-point games in late March to hopefully gain your trust, then finished with 105 points and 20 treys over the final week of the season (four games). This is a guy that could have won you your championship if you had stuck with. It will be interesting to see how many minutes Miles gets next season with Paul George returning in full force.

Nikola Mirotic, PF, Chicago Bulls: Mirotic got recommended twice before he became a March Monster, averaged 21 points and eight rebounds while possibly pushing you into and through the first round of your playoffs. Given consideration as the Rookie of the Year, he is still young and could be looking at a big role in Chicago for years to come.

Hassan Whiteside, PF/C, Miami Heat: Whiteside came out of nowhere and is the kind of guy that could have won you your league. Averaging 12 points, 10 rebounds and 2.5 blocks isn’t a joke. It will be interesting to see how Whiteside does next season after opposing coaches do some scouting. The only negative with him is assists, as he had just six the entire season.

Rudy Gobert, Utah Jazz: Gobert was our deep sleeper of the season, and were we wrong, we said he could be great in a few seasons and should be picked up in dynasty leagues. Instead he decided to break out this season, winding up third in the Most Improved Player voting. Gobert helped force Enes Kanter out of Utah and took over the starting job, averaging 11 points, 13 rebounds and nearly three blocks as a starter. Gobert finished the season sixth in rebounds and second in blocks.

Hassan Whiteside, Miami Heat: We recommended Whiteside in mid-January, and it turned out as a golden pick as he got way more touches in January, then sunk even more buckets in February before cooling slightly in March and then finishing with a flourish on the glass in April. All told, he improved his FT shooting while averaging a double-double with over two and a half blocks per game. Whiteside was a major surprise for Miami this season and if you were smart enough to scoop him off the wire early, you got about three months of solid production.

Michael Beasley, SF, Miami Heat: In a few Fantasy leagues we play in, the championship is a one day matchup on the final day of the season, and with the Heat eliminated from the playoffs it decided to play four players, including Beasley, the full 48 minutes. He put up 34 points, 11 rebounds, eight assists, two steals and two blocks and may have single-handidly won you a championship on the final day of the season even though there was no reason you should have been starting him, right?

By McCade Pearson
Tags: C.J. Miles, NBA
This entry was posted on Saturday, May 30th, 2015 at 10:42 pm and is filed under BASKETBALL, McCade Pearson, The Wire Troll. You can follow any responses to this entry through the RSS 2.0 feed. Both comments and pings are currently closed.