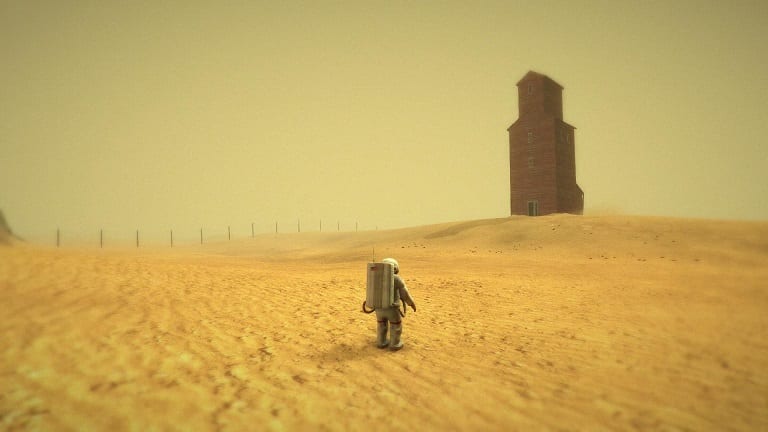 Yeah, that’s not ominous at all…

Traveling to new and exotic worlds is old hat in the realm of gaming. And more often than not in those scenarios lots of guns and screaming are involved. One look at Stage 2 Studios’ Lifeless Planet told us this wouldn’t be anything like that. Instead of finding murderous aliens waiting to harvest our organs for fuel, you’ll find something almost as unsettling: nothing.

Broken down to its essence, Lifeless Planet is a platformer in that much of your exploration is done by jumping across elevated pieces of rock. You’ll be equipped with a jetpack that offers a mid-air boost to extend distance or increase height, and properly timing that is probably the game’s biggest challenge. Sizeable sections of the game will have you find additional jetpack fuel, which in turn allows you to boost multiple times during a single jump.

While it’s a manageable experience, it’s not particularly crisp. There’s just an inexact feel to all of it — now whether that was intentional to simulate gravity’s influence or being inside a spacesuit we can’t say, but tighter, more consistent controls would’ve helped either way as missing jumps is the No. 1 cause of both in-game deaths and controller-wrenching frustration. Fortunately, the game is pretty liberal with its checkpoints so you rarely have to replay more than a couple of minutes.

Occasionally you’ll run into objects you can physically interact with, such as boulders and explosive charges, and though the animations themselves look awkward they handle just fine. There are also a handful of times when you’ll need to deploy a mechanical arm. This triggers a simple mini-game that is effectively failure proof.

There’s an interesting sense of serenity to be found while traversing this new planet. It’s especially effective early on when you have yet to fully grasp what’s happening. By the end, however, you’ll likely have tired of the constant rocky outcroppings, tinged with green to indicate the path to follow. A story-related explanation for why the planet looks that way does exist, but it still would’ve been nice to get more variety in the areas you visit.

Moving beyond the choice of how to lay out the world and on to execution, Lifeless Planet is one of the least technically proficient games on the Xbox One. Despite featuring a desolate world, often with only one moving entity on it, things are just bland with moments when it’s very difficult to identify what parts of the surface you can reach and those you can’t. It doesn’t really take away from what makes the game enjoyable, but it can be annoying.

Voice acting is limited, and much of what’s there is in Russian (we assume). While it’s alright, it could’ve done more to sell a rising sense of confusion or desperation as you progress. Instead it’s more of a matter-of-fact narration. The soundtrack and effects are both good.

You’re a member of a three-person expedition dispatched to check out a newly discovered world thought to be teeming with life. Things go wrong on your flight, however, as you and your team crash land on a barren rock. It’s up to you to locate your missing crew members and figure out exactly where you are.

That’s the initial setup, though you’ll accomplish those two items in short order, which leads to the game’s bigger mysteries: why this supposedly lush world appears almost devoid of life? And how did the Soviet Union get here first?

It’s the quest for answers that drives the game forward as you travel a fairly linear pathway, tracking what appears to be an altered human female. Along the way you’ll start to piece together how things came to be as they are. It’s not the most scintillating stuff out there, but it kept us pressing onward.

Lifeless Planet resists the urge to implement action into the game, instead relying on mood to keep things tense. It works for a while, but over time the mix of environmental hazards loses its effectiveness. It doesn’t help that the game holds your hand from start to finish, constantly giving away how things are to be solved.

For example, the aforementioned jet fuel only shows up right before sections in which it’s needed. Once you clear you’ll get a message that you’ve exhausted the fuel. That’s a scripted event, however, so there’s no way to burn through it prematurely or save it for an upcoming section. The same goes for issues with your air supply. The only time you’ll find yourself running low on oxygen is when you’re about to come across some place you can refill your tank.

Also keep in mind that this is a short game (4-to-5 hours the first time around) with little to do beyond following a preset path — you can collect minerals and documents by branching a bit, but outside of fleshing out the story to a minor degree they’re of no value — and even in that context it still starts off stronger than it finishes.

With Lifeless Planet, the ideas are better than the execution. We were drawn in, but after a while the sameness of the world and your actions bog things down, and the story payoff isn’t great. That being said, we’d still advocate downloading Lifeless Planet to experience a different kind of sci-fi game.

By HC Green
Tags: Lifeless Planet, Soviet Union, Stage 2 Studios, Xbox One
This entry was posted on Wednesday, May 13th, 2015 at 8:08 pm and is filed under Herija Green, Video Game Reviews. You can follow any responses to this entry through the RSS 2.0 feed. Both comments and pings are currently closed.