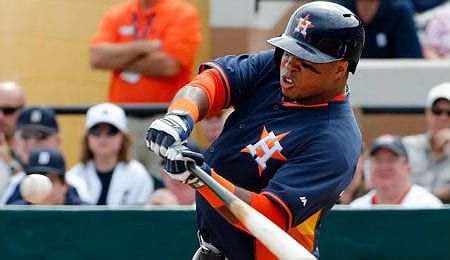 Luis Valbuena is a great source of power. (Entornointeligente.com)

Fantasy baseball is picking up steam. As April nears its conclusion, we are getting a better look at some players that could be true steals for your lineup. As injuries and ineffective start to affect teams, other players are starting to quietly ascend. Without further ado, here are this week’s Fantasy baseball waiver wire recommendations.

Luis Valbuena, 3B, Houston Astros (ESPN: 31.7 per cent; CBS: 40 per cent): Valbuena can provide some power for you (see video below) with five home runs under his belt already. Considering he plays in the shoebox-esque Minute Maid Park, those numbers could continue to soar. ESPN owners are certainly taking note, as Valbuena’s ownership has skyrocketed almost 30 percentage points in the last week.

Will Middlebrooks, 3B, San Diego Padres (ESPN: 25.6 per cent; CBS: 46 per cent): Speaking of third basemen with spiking ESPN ownership (he’s up nearly 25 percentage points in the last week), Middlebrooks is starting to show moderate flashes of what the Red Sox had long hoped for. He’s hit safely in 10 of 11 games and has shown some pop with three homers and 11 RBI, even throwing in a couple of stolen bases for good measure.

Brock Holt, 3B/OF, Boston Red Sox (ESPN: 9.2 per cent; CBS: 20 per cent): What is it with New England and diminutive “little-engine-that-could” guys? Whether it’s Wes Welker, Rajon Rondo, Dustin Pedroia or Holt, these guys become cult heroes fast. And with good reason. Holt is challenging Ted Williams in his quest for .400 (okay, not really), and manager John Farrell has stated Holt’s playing time will increase because of his great “presence.” The Orioles learned this the hard way on Friday when Holt socked a three-run homer late in the game to beat them.

Wandy Rodriguez, SP, Texas Rangers (ESPN: 0.6 per cent; CBS: 2 per cent): A fallen star looking to turn it around in Arlington, Rodriguez was sharp in his Rangers’ debut Friday in Anaheim, limiting the Angels to just one run over five innings, walking three and fanning five. Texas’ rotation is a shell of what it once was, so Rodriguez could have a chance to be a stabilizing force if he rediscovers the form that made him a pseudo-ace in Houston for a number of years.

Tim Beckham, 2B, Tampa Bay Rays (ESPN: 1.1 per cent; CBS: 12 per cent): Slowly but surely, Beckham is displaying flashes of what you would expect to see from a former No. 1 overall pick. He could eventually be an everyday player in 2015 with a combination of average, power, and speed. Beckham has launched three homers in his first 36 at-bats.

Yimi Garcia, RP, Los Angeles Dodgers (ESPN: 19.5 per cent; CBS: 33 per cent): A week after we sang the praises of Joel Peralta for stabilizing the Dodger bullpen, it was Garcia who was lights out Friday in getting his first big-league save. Since there is no defined closer while Kenley Jansen is on the shelf, Garcia could get a few more saves along the way. And it doesn’t hurt that his ERA is below a run.

Danny Valencia, 3B, Toronto Blue Jays (ESPN: 0.1 per cent; CBS: 1 per cent): Valencia is on here for the sheer fact that he is 7-for-11 over the last three games, even if it likely won’t translate to consistent playing time. Still, given his versatility and veteran presence, he has been overly impressive and could be ready to contribute more in the event of an injury to a starter.

J.T. Realmuto, C, Miami Marlins (ESPN: 0.5 per cent; CBS: 11 per cent): Realmuto is seeing a little more consistent playing time with the massive struggles of Jarrod Saltalamacchia, and has hit in five of his last eight games. If the Marlins can pick up a little steam offensively, Realmuto could find himself in a few more run-scoring opportunities.

Freddy Galvis, SS, Philadelphia Phillies (ESPN: 1.2 per cent; CBS: 11 per cent): Galvis is battling for playing time with Andres Blanco, but his play of late may give him a leg up for more ABs. Galvis turned in three-hit performances on Friday and Sunday, and may even sprinkle in some run-production as well.

Logan Forsythe, 2B, Tampa Bay Rays (ESPN: 4.9 per cent; CBS: 16 per cent): Forsythe has some occasional pop and got off to a solid start in 2015, reaching base safely in his first 10 games. He has driven in nine runs through 19 games.

Paulo Orlando, OF, Kansas City Royals (ESPN: 1.1 per cent; CBS: 3 per cent): The former White Sox farmhand is looking like he belongs in the bigs, having tripled five times in the first 45 at-bats of his career.

Adeiny Hechavarria, SS, Miami Marlins (ESPN: 23.6 per cent; CBS: 47 per cent): Hechavarria has hit safely in nine straight games, punctuated by a bases-clearing triple on Sunday. Through 19 games, he has 15 runs and 16 RBI.

Joe Paterson, RP, Kansas City Royals: The Royals have a strong pen, but should they need help, veteran Paterson has been lights out at Triple-A. He’s no longer a prospect, but is averaging nearly a K per inning with a brilliant ERA while closing for the Omaha Storm Chasers. Just a name to tuck away at this point.

Adam Eaton, OF, Chicago White Sox (ESPN: 27.9 per cent; CBS: 46 per cent): An ice cold start had many owners dumping Eaton, but he’s enjoyed three multi-hit games in the last five, and he’s capable of more extra-base pop than he’s exhibited so far.

By Michael Seff
Tags: Fantasy Baseball, Houston Astros, Luis Valbuena, Minute Maid Park
This entry was posted on Sunday, April 26th, 2015 at 11:15 pm and is filed under BASEBALL, Michael Seff, The Wire Troll. You can follow any responses to this entry through the RSS 2.0 feed. Both comments and pings are currently closed.