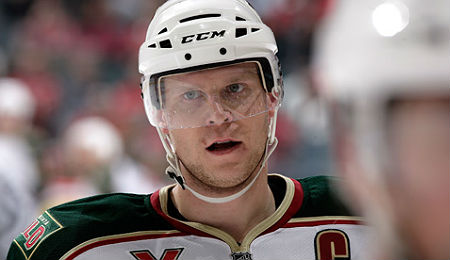 Mikko Koivu is one of the league’s best faceoff men. (Wild.nhl.com)

The 2014-15 NHL regular season is over and with it, we’ve also reached the end of the Fantasy hockey season. It’s now time to take a look back at the season’s best waiver wire recommendations with the 2014-15 RotoRob Wire Troll All-Star Team.

Mikko Koivu, C, Minnesota Wild (Final Ownership – ESPN: 32.3 per cent; CBS: 55 per cent): Koivu is always one of the league’s best face-off specialists (see video below), and he finished the season with 14 goals, 48 points and a plus-2 rating while averaging 19:01 of ice time. Minnesota’s captain recently became the first player in franchise history to top 500 points while playing his entire career with the Wild. He’ll start the postseason between bruising power forward Chris Stewart and speedy young goal scorer Jason Zucker.

Nikita Kucherov, LW/RW, Tampa Bay Lightning (Final Ownership – ESPN: 64.2 per cent; CBS: 97 per cent): One of Tampa’s rising young stars, Kucherov had 28 goals, 64 points and a plus-38 rating. With Steven Stamkos, Tyler Johnson, Jonathan Drouin and other promising youngsters still a ways off from realizing their full potential, Kucherov adds to a group that will be downright lethal for years to come.

Steve Downie, LW/RW, Pittsburgh Penguins (Final Ownership – ESPN: 13.5 per cent; CBS: 49 per cent): Downie had just 14 goals, 28 points and a plus-2 rating, but his 238 minutes in the sin bin made him a beyond valuable asset in leagues with penalty minutes as a statistical category. He also contributed in the hit department.

Anton Stralman, D, Tampa Bay Lightning (Final Ownership – ESPN: 42.4 per cent; CBS: 87 per cent): After an impressive run with the Rangers to the Stanley Cup Finals last season, Stralman signed with Tampa Bay… and proceeded to post the best numbers of his career. In 82 games played, the Swede had nine goals, 39 points and a plus-22 rating while averaging 21:05 of ice-time. Can he keep up his exceptional performance in the postseason? If Game One (+1, five shots) is any indication, the answer is a resounding yes.

Kris Russell, D, Calgary Flames (Final Ownership – ESPN: 36.5 per cent; CBS: 62 per cent): With a season-ending injury to Calgary’s top defenseman Mark Giordano, Russell was the guy who stepped up, and he did so beautifully with four goals, a career-high 34 points and a plus-18 rating while averaging 23:05 of ice-time. Playing with a team that has not made the postseason since 2009, Russell will be forced to play big minutes. So far, he’s proven himself to be up to the task.

Devan Dubnyk, G, Minnesota Wild (Final Ownership – ESPN: 66 per cent; CBS: 81 per cent): If you were one of the many that snatched up Dubnyk, you probably took your team on a pretty good run in the Fantasy postseason. Minnesota is looking to ride him all the way to victory just like we did, and it’s easy to see why. The 6’6″ netminder had 36 wins, a 2.07 goals against average, a .929 save percentage and six shutouts in 58 games between Minnesota and Arizona. He’ll be a finalist for the Vezina as the league’s best goaltender and the Hart as the league’s regular season MVP.

We just want to say that while some of these players have better numbers than players on the First Team, they contributed in fewer statistical categories, decreasing their worth in many league formats.

We would have included Florida Panthers rookie defenseman Aaron Ekblad on this list, however, we forgot to include him as a wire pickup, though he did make our “Studs” list on a few occasions. The first overall pick of the 2014 NHL Draft finished the season with 12 goals, 39 points, a plus-12 rating and an average ice-time of 21:04. It was the best season by a rookie defenseman in Panthers history.

By Dakota Case
Tags: Fantasy Hockey, Mikko Koivu, Minnesota Wild, NHL, Waiver Wire
This entry was posted on Sunday, April 26th, 2015 at 4:15 pm and is filed under Dakota Case, HOCKEY, The Wire Troll. You can follow any responses to this entry through the RSS 2.0 feed. Both comments and pings are currently closed.