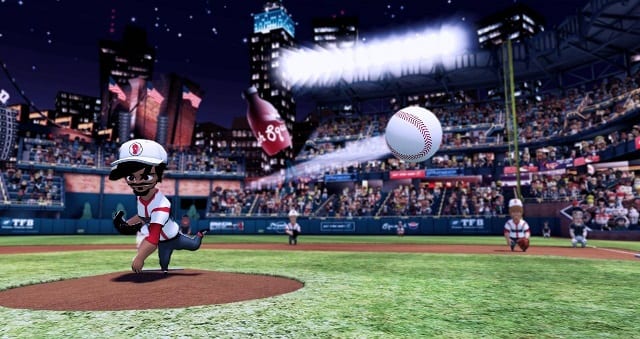 Forget about the curveball, give ’em the heater!

Let us start with a question: do you remember when baseball games were fun? Back before it was all about picturesque recreations of stadiums, lifelike players and tons of statistical minutia. We’re talking the days of Baseball Simulator 1000 and Baseball Stars, when sitting down and basking in the gameplay trumped everything else. Well, if you do, Metalhead Software’s Super Mega Baseball hopes to recreate that fun. And if you don’t, it intends to introduce you to it.

There are always four aspects to any baseball game’s controls: hitting, pitching, fielding and running the bases. Of the group, hitting is the most enjoyable. Here you’ll be asked to track pitches with the left stick, positioning your cursor on the sweet spot. Pressing “X” initiates a contact swing, while circle aims for the fences. You can also use the analog stick, which includes a power meter that fills and depletes as you hold it down, for batting. It’s well done, requiring both reflexes and timing to excel.

Pitching is fun, too. Flicking the right stick selects the pitch and “X” delivers. From there you’ll try to steady the shaking cursor and make it line up with a box that indicates the intended location. As you’d expect, different pitches break differently, so a forkball dives down sharply while a slider features side-to-side movement. The only real downer here is that every pitcher appears to have the same repertoire, so they all handle similarly.

Most of the fielding is done automatically, though you can take charge and manually dive for balls and attempt to scale the fence to bring back home runs. Throwing is handled with a simple meter. Base running is strong, mixing the analog sticks and triggers to create one of the best experiences we’ve ever had in that department. On the downside there’s a minimal sense of speed, and even the faster players seem to steal bases like they’re running in quicksand.

Easily the weakest aspect of Super Mega Baseball is its presentation. The players resemble something you’d see from Nintendo Miis and the like, with disproportionate body parts and exaggerated features like massive craniums. There’s not a lot of variety, so even though players are customizable you’re still bound to see a lot of similarities from one player or team to the next. Ballparks follow the same style, and with only four to visit you’ll be revisiting them a lot.

With no commentators or on-field chatter, all that’s left is the ultra intense umpire and the cheering of fans, who don’t seem to care whether you’re at home or on the road. There’s nothing terrible in any facet of the presentation, but it does little for the game other than differentiate even further from those with real major leaguers.

As you’ve likely surmised by now, Super Mega Baseball is completely unlicensed. That means no players, no teams and no logos — hell, there aren’t even any cities. Instead of the Yankees and Red Sox you’ve got the Beewolves and the Sirloins. Instead of Alex Rodriguez and David Ortiz you’ve got luminaries like Rip Dingers, Norton Pickle and Ella Roids. Suffice to say that SMB doesn’t bemoan its lack of a license, it revels in it by injecting humour into the game.

Thankfully, that humour never threatens to impede on the gameplay, knowing when to be front and centre and when to fade away and let baseball be baseball. Difficulty is based on your Ego rating, which can be tweaked to your liking until you find the proper level of challenge. Turn it down and pound away on the CPU with forgiving pitching and an automatically tracking contact point, or crank it up for a very tough test of your gaming mettle.

Although there is no advanced roster management, such as trading or minor league systems, Super Mega Baseball still allows you to find a roster to your liking. For starters, each of the 12 teams has a core skill (power hitting, pitching, defense, etc.) that can then be augmented by hiring staff to provide boosts to players. Staff hires become available as you level up, done by earning stars in game, and they offer unique bonuses to increase your ratings like contact and mojo (read: player confidence).

It’s a good system, but it has limited applications because of the lack of game modes. Your two options on that front are Exhibition and Season. Both are self explanatory, though Season mode at least allows you to tinker with things like length, number of innings and so on. You’re also free to customize your players’ name and appearance. There’s no online component outside of leaderboards, confining the limited multiplayer to those in your home.

If you play video game baseball to ape what you see from April to October, Super Mega Baseball isn’t for you. If, however, you’re looking for a fun take on the sport with excellent controls and tight gameplay, it’s well worth your time.

By HC Green
Tags: BASEBALL, Super Mega Baseball
This entry was posted on Tuesday, April 14th, 2015 at 12:48 am and is filed under BASEBALL, Herija Green, Video Game Reviews. You can follow any responses to this entry through the RSS 2.0 feed. Both comments and pings are currently closed.