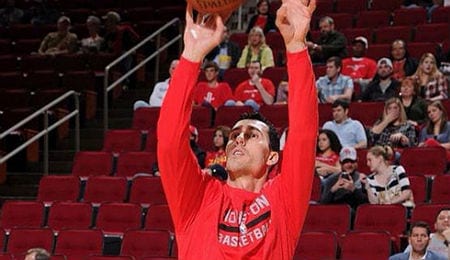 Pablo Prigioni has been elevated into a job share at PG for Houston. (Internet)

Welcome back for another week of Fantasy basketball. Stephen Curry just scratched ex-coach Mark Jackson off his Christmas card list; Portland has clinched its first Northwest Division title since co-winning it in 2009; and Kyle Lowry (back) is aiming to return to the Raptors before the end of the regular season.

Dante Exum, PG/SG, Utah Jazz (ESPN: 0.8 per cent; CBS: 22 per cent): Exum, the fifth overall pick in lat year’s draft, has shown promise as a rookie but is still very raw. He did break into the starting lineup but that was more for his defensive presence than his offensive ability. Exum wasn’t as aggressive as most fans had hoped, however he has taken that criticism to heart and has started attacking the hoop more. He is still struggling to score but did have a career high 12 assist on Wednesday. It’s a small sample size but the eye test says Exum could finish this season strong, and is a great option to trade for in dynasty leagues as he has a very bright future.

Pablo Prigioni, PG/SG, Houston Rockets (ESPN: 0.7 per cent; CBS: 1 per cent): Prigioni is a sneaky low risk-high reward pick up. After being a great player in Europe and trying his luck in the NBA, he’s slowly started to find his groove. Now with the Houston Rockets, where Patrick Beverley is out for the season, Prigioni could play a vital role down the stretch. When Prigioni was with the Knicks, he showed some serious passing skills (see video below), and with his assists and minutes up, he might be worth a late pick up.

T.J. Warren, SF, Phoenix Suns (ESPN: 1.3 per cent; CBS: 6 per cent): Warren is finally getting his chance to play, seeing 25 minutes a game over the last three while averaging 16 points on 72 per cent shooting. While it might be too little, too late for this season, this rookie (the 14th overall pick last year) looks like a intriguing dynasty option.

Marvin Williams, SF/PF, Charlotte Hornets (ESPN: 5.0 per cent; CBS: 22 per cent): Williams has been impressive since the All-Star break, but especially over the last four games. He has hit double figues in every game and is starting to get his rebounding stats up as well. Williams is savy veteran who could play a big part in the Hornets final push for a playoff spot.

Jared Sullinger, PF/C, Boston Celtics (ESPN: 9.3 per cent; CBS 43 per cent): In one of the more interesting stories of the season, Sullinger was ruled out for the season after getting hurt on February 11. However, on Friday the Celtics announced he had been cleared to return. Suddenly a great Fantasy option throughout the season who had been dropped in a lot of leagues is now out there. Sullinger only played three minutes on Friday as team works him back slowly, but who knows what he will do down the stretch? He has high upside and likely needs to be owned in every league.

Henry Sims, Philadelphia 76ers (ESPN: 0.7 per cent; CBS: 9 per cent): We’ve recommended Sims a couple of times this season, most recently at the end of January. It wasn’t the best call, as his FT shooting was worse in February and he sunk fewer buckets in March. However, this is a speculative pick based on the fact that Nerlens Noel had to come out early Saturday with an eye injury. If Noel is going to miss time, Sims could have nice value. A good spot up shooter, Sims has to seize this opportunity to prove he deserves to be part of the team’s go-forward plan. On Monday, he got 25 minutes of action, flirting with a double-double and adding a steal. Sims more or less fell out of the rotation last month, so he absolutely needs to step up now or his future will be in doubt.

By McCade Pearson
Tags: Mark Jackson, Northwest Division, Portland Trail Blazers, Stephen Curry
This entry was posted on Saturday, April 4th, 2015 at 9:13 pm and is filed under BASKETBALL, McCade Pearson, The Wire Troll. You can follow any responses to this entry through the RSS 2.0 feed. Both comments and pings are currently closed.