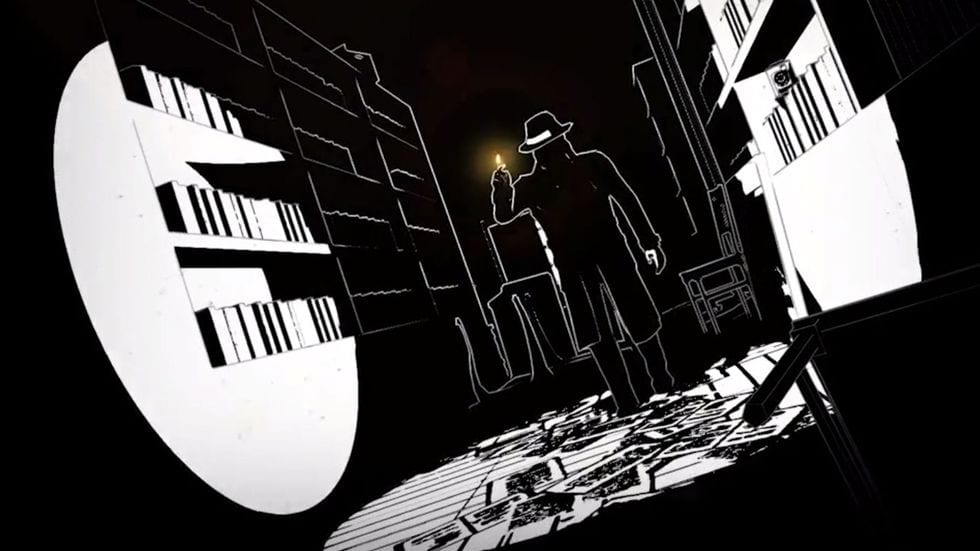 White Night puts you in the middle of a monochromatic noir nightmare.

A car crash on a desolate road. An abandoned mansion filled with secrets. A dark and stormy night. Plenty of clichés come together in White Night, but the result is a haunting survival horror experience that’s only held back by some clunky controls.

Much of White Night’s inspiration can be traced back to the original Resident Evil, but while the game mercifully avoids the PlayStation One era’s tank-style controls, movement is still clunky. A big part of this is camera angle. With game elements built in 3D but movement at a static view, it’s hard to tell what you’re getting caught on when you’re trying to move from A to B. The game’s unique aesthetic makes it all very pretty, but it does affect discerning what’s what at times.

Interaction is otherwise pretty straightforward. Icons show up when you’re by an object of interest, so simple button presses drive most of the game. You can run about an hour in, though sometimes that just makes you bump into the environment faster. The principle mechanic is hitting a button to light a match, but don’t get too trigger-happy with this — when you’re out of matches, you’re pretty much screwed.

White Night looks different than just about any game you’ve seen, and its use of stark colour masks otherwise standard character models. Everything is black except for objects that receive light from a match or a lamp, and those show up as white, making for a stark contrast similar to cel shading or black-and-white comic books (think the film versions of Sin City).

While this sometimes makes it difficult to figure out what an object actually is, it looks beautiful and creates the right sense of foreboding. When you do see pieces of the characters up close, the illusion breaks down a bit as they tend to be a little clunky. But those moments are few and far between, and for the most part, you’re sucked into this two-toned world.

Old-school noir is a heavy influence of the game, from the setting to the gravely-voiced protagonist. Some of the lines he says border on cliché, but otherwise smart sound design keeps things eerie and tense. There’s the classic visceral thrill of walking through an empty house, then hearing a door slam shut in the distance. The game favours creepy sound design over jump scares, and that’s welcome in the modern survival horror landscape.

White Night offers a unique take on survival horror. Instead of running out of health or ammo, you’re running out of light. Only by finding boxes of matches or the occasional light switch can you see the actual game. Matchboxes seem plentiful until you need one, and that adds to the tension and suspense.

Outside of that unique mechanic, the game is a standard haunted house mystery told through found documents and photos. Much of White Night’s design philosophy is based on old-school adventure gaming: find the object or clue, use it to solve the puzzle and advance the story. Along the way, you pick up bits of a twisted family history and get immersed in the stark aesthetics and spooky environment.

This mostly works very well, even with the particularly wonky static camera system. It’s refreshing to have survival horror that doesn’t rely solely on blasting at monsters or jump scares. However, White Night falls into that time-honored adventure game trap of wandering aimlessly and rechecking locations when you’re stuck. Many times, the reason why you get stuck has less to do with puzzle difficulty and more because the static camera and soft detection led to you missing something on the floor.

Unfortunately, there are moments of twitch gameplay, and that’s really when things fall apart. There comes a time to run fast from the only thing that can kill you in the game: ghosts. And the ghosts will chase you, which wouldn’t be a problem if stepping around didn’t change your camera angle and leave you disoriented. What would have worked much better is if the camera switched to a chase view in these instances or at least held the same angle and panned. We had to escape a long room with three angle changes and multiple vague obstacles on the floor and it nearly caused us to rage quit after our fifth try.

By Mike Chen
Tags: White Night
This entry was posted on Monday, March 16th, 2015 at 3:40 am and is filed under Mike Chen, Video Game Reviews. You can follow any responses to this entry through the RSS 2.0 feed. Both comments and pings are currently closed.