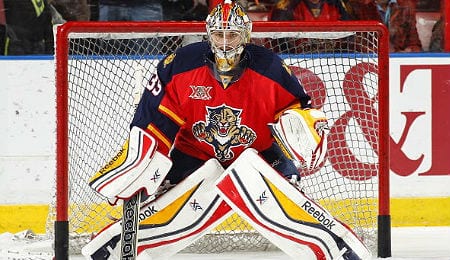 Dan Ellis could provide a quick fix to your goaltending woes. (Ilovegoalies.blogspot.com)

It’s been another great week of Fantasy hockey with surprise sleepers and studs lurking around every corner. Here at RotoRob.com, we’ve adjust our teams accordingly and suggest you do, too.

If you’re like us, Sunday marks the end of the regular season. If you’ve survived so far, congratulations — making it to the dance can be a tricky thing to do in some league formats. So, after giving yourself a well-deserved pat of the back, it’s time to get back to work and find the best options for your team on your league’s waiver wire.

Two weeks ago, we told you to keep your eyes on Chris Stewart. We hope you listened as he’s been dynamite since getting dealt to the Wild. But not to worry… he’s still widely available, so don’t delay.

And now, to this week’s Fantasy hockey waiver wire picks.

Dan Ellis, G, Florida Panthers (ESPN: 3.2 per cent; CBS: 6 per cent): Looking for a quick fix to your situation in goal? Well, so was Florida when both Roberto Luongo and Al Montoya went down with injuries in the same game. With names like Devan Dubnyk, Andrew Hammond, Cam Talbot and others stealing both NHL and Fantasy headlines, Ellis has slipped under both radars with some quietly good numbers. In the four games he has played since being recalled, Ellis has three wins, a 1.92 goals against average, a .925 save percentage and a shutout (see his reaction to the goose egg in the video below). If you’re looking for that third goaltending option heading into the postseason run, he could be a sneaky good pick.

Ryan Spooner, C, Boston Bruins (ESPN: 6 per cent; CBS: 14 per cent): The final quarter of the season is always an exciting time as the cream of the youngster crops starts to emerge and separates itself from the rest of the pack. The obvious names have done exceedingly well — Aaron Ekblad, Filip Forsberg and Johnny Gaudreau — however, Boston’s Spooner has emerged as a dark horse candidate with three goals and nine points in his past 10 games. He had two goals, four points, a plus-1 rating, two power play points, 11 shots on goal, nine face-off wins, three hits and a blocked shot last week. At this point in the season, you’re going to do whatever it takes to win, and we think Spooner is worth taking a chance on as a source of secondary scoring.

Elias Lindholm, C/RW, Carolina Hurricanes (ESPN: 5 per cent; CBS: 21 per cent): Speaking of emerging youngsters, you might want to check out Carolina’s Lindholm. He had a spectacular performance last Sunday, swapping hat tricks with Edmonton’s Ryan Nugent-Hopkins in a 7-4 win over the Oilers. The young Swede had three goals, six points, a minus-1 rating, three power play points, nine shots on goal, two face-off wins, three hits and a block. However, he did score all but one of those points against Edmonton, so there’s that to consider.

No. 1. Ryan Nugent-Hopkins, C, Edmonton Oilers: The “Nuge” has had a very great week, which all began with a three-goal, four-point game in a losing effort to Carolina on March 8. He finished the week with three goals, eight points, a minus-1 rating, two penalty minutes, five power play points, 15 shots on goal, 24 face-off wins, three hits and three blocked shots. On a side note, our NHL Editor has a personalized autographed O-Pee-Chee Nugent-Hopkins rookie card, but we digress…

No. 2. Jordan Eberle, RW, Edmonton Oilers: Eberle had a very similar week to his teammate, also scoring three goals and eight points, but the stats differ from there. He added a minus-2 rating, four penalty minutes, six power play points, six shots on goal, two hits and two blocks.

No. 3. Cam Talbot, G, New York Rangers: Talbot has stepped up nicely in place of injured franchise netminder Henrik Lundqvist, winning seven of his last nine games. In Week 22, Talbot had three wins, two goals against for a 0.66 goals against average, a .977 save percentage and a shutout. The Rangers are going to be a formidable playoff opponent, and he is a big reason why.

No. 1. Ben Scrivens, G, Edmonton Oilers: While Nugent-Hopkins and Eberle were lighting the lamps for the Oilers, Scrivens has had better weeks — we can’t quite think of one off-hand, but trust us, he’s had better weeks. In three appearances last week, Scrivens had zero wins, a 4.58 goals against average and an .838 save percentage.

No. 2. Jimmy Howard, G, Detroit Red Wings: If our NHL Editor wakes up tomorrow and isn’t in the postseason, Howard’s Saturday clunker is directly to blame. Howard had a relatively decent week, but seven goals against at the hands of Philadelphia has many Fantasy owners wondering whether starting him will be the right call. In four games in Week 22, he had one win, 13 goals against for a 4.00 goals against average and an .879 save percentage.

No. 3. Michael Hutchinson, G, Winnipeg Jets: Hutchinson is going to be a great goaltender in this league, but he’s struggled recently. In two appearances last week, the youngster allowed seven goals for a 4.71 goals against average and a .731 save percentage.

And that’s it for our coverage this week. How did you do? Did you make it to the dance? Tell us in the comments section below.

By Dakota Case
Tags: Chris Stewart
This entry was posted on Sunday, March 15th, 2015 at 3:16 pm and is filed under Dakota Case, HOCKEY, The Wire Troll. You can follow any responses to this entry through the RSS 2.0 feed. Both comments and pings are currently closed.