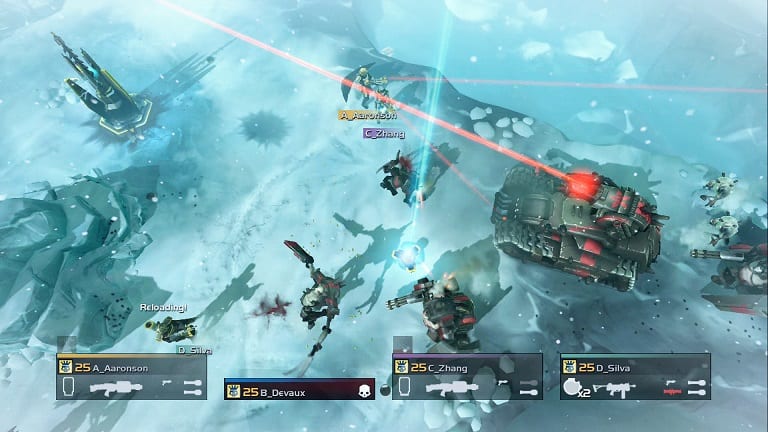 Forget about yellow, it’s the red snow you gotta avoid.

Do you have what it takes to become the elite of the elite? Do you constantly yearn to get more out of your life and make a difference? Are you seeking adventure, excitement and fulfillment that span the galaxy? In that case, Arrowhead Game Studios urges you to take a step forward and march with the Helldivers, to spread Democracy across the universe, one bullet at a time.

Being a twin-stick shooter, Helldivers controls wonderfully. Pulling R2 fires your weapon, and L2 makes your Helldiver toss a grenade (with a further arc the longer you hold the trigger). Pressing Triangle cycles through your two primary weapons while holding it down lets you switch to your tertiary weapon. In case the enemies have closed in on you, mashing circle produces semi-rapid melee attacks — though you should really only rely on them in a pinch against smaller foes. Square is absolutely invaluable, as it makes your Helldiver take cover or go prone and let otherwise lethal bullets fly harmlessly overhead.

Activating “Stratagems” is a fun and hair-raising addition as well. Holding L1 brings up a menu full of directional commands, and pressing them in the correct order will grant you a grenade that may be a support beacon for an ammunition drop, a recoilless rifle for the big baddies or even an armoured personnel transport complete with gun turrets. Activating them in the heat of battle is rarely easy, but a skilled set of players can handle anything thrown at them with proper Stratagem management.

Helldivers doesn’t push the limits when it comes to graphical fidelity, but the artists employed worked as much magic as they could and the end result is pretty awesome to look at. The terrain from planet to planet varies with floral life and geographical features such as deep ravines with heat vents blasting vapour forth.

The animation for your Helldivers and enemies alike are marble smooth while activating the Stratagems mentioned above often produce several small, or a few large, blooming explosions. The various weapon effects are equally as impressive and really make every gun feel deadly and effective — shotguns are nice and throat-y sounding and beam cannons give off a menacing hum.

The audio effects create a wonderful soundscape, and we like how the Helldivers themselves sound a lot like an Ultramarine from Warhammer 40k. The soundtrack is reminiscent of ‘80s action sci-fi flicks, full of synth and lingering tones.

Once you’ve passed the training portion of the game and swallowed enough Democratic propaganda, you’re free to liberate as you see fit. You start off by selecting a destination for your ship, which also acts as a multiplayer lobby.

Early missions can be done solo, but the difficulty quickly ramps up because the game has a very heavy emphasis on co-op play. Once you’ve selected a planet to liberate, you select a mission and a drop point.

While on the surface of a planet you must track down your objectives using your pop-up map, execute orders and then extract back into orbit. Sounds easy, but endless waves of enemies charge your position if you alert a patrol, so even though you’re right next to your objective and there’s only one stage left to activating the S.A.M. site, you might just have to relocate and come back if you wish to succeed.

Helldivers is all about self-preservation and responsible shooting: friendly fire is always on. Inevitably you will gun down a teammate and have to call in a reinforcement drop to get them back in the game, but that drop can, and usually will, crush another carefree Helldiver.

Every day you log in you will receive a recap of what is going on in the galaxy, showing you territories that have been seized or won, which also complements the Super Earth broadcast ticker in your menu areas that rattle off stats like how many bullets have been fired since the beginning of the war (since the game’s release) and how many poor Helldivers have needlessly lost their lives from friendly fire.

The exaggerated politics of Super Earth and the task of “Spreading Democracy” give the game a very lighthearted and comical feel, which contrasts with the terrors of fighting bugs, cyborgs, and psychic aliens very well.

Helldivers has a few issues, such as matchmaking problems and occasional crashes, but we’ve seen these addressed by the devs, and they’ve already been adamant about fixing, improving and adding onto their game. We can’t wait. Helldivers already is one of, if not the best co-op experience on PlayStation 4.

By Jeff Cater
Tags: Arrowhead Game Studios
This entry was posted on Friday, March 13th, 2015 at 4:41 pm and is filed under Jeff Cater, Video Game Reviews. You can follow any responses to this entry through the RSS 2.0 feed. Both comments and pings are currently closed.