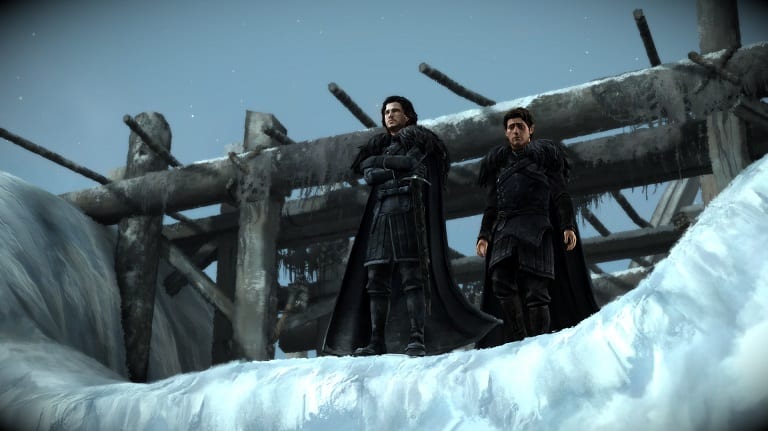 SPOILER ALERT: The guy on the left knows nothing.

After setting a lot of things in motion in the first episode, with critical decisions aplenty and a surprising ending, Game of Thrones’ second act (The Lost Lords) does little to advance the story in meaningful ways as it crams four separate plotlines into less than two hours of game time.

Two of those stories follow characters you controlled previously — Gerard Tuttle, who arrives at The Wall, and Mira Forrester, who remains in the service of Margaery Tyrell — while you’ll be adding two new playable arcs. The first is that of Asher Forrester, the exiled brother in Slaver’s Bay that is now making his way as a sell sword, while the second we’ll let you discover for yourself.

Asher’s story begins in Yunkai, and although it offers some welcome action sequences, it’s short on decisions that affect the game. You get to choose whether or not to kill a couple of people, but beyond that it’s mostly him and his travelling companion, a woman named Beskha, exchanging chitchat. Asher comes across as likable, but thus far he’s more Daario Naharis (the self-professed “simplest man you’ll ever meet”) than Jorah Mormont in terms of complexity.

Back in King’s Landing, Mira’s tale is a mixed bag. She’s presented with probably the most significant decision of the entire episode — whether or not to betray Margaery’s trust — before being shoehorned into a negotiating session after Tyrion Lannister just happens to walk past her on his way to said meeting and invites her along so he can “have some fun.” It felt far too convenient and completely out of place in the meticulously crafted world of Game of Thrones.

If you’ve watched the show you’re in for a lot of deja vu with Gerard’s introduction to the Night’s Watch, which mirrors Jon Snow’s experiences too closely for its own good. You’ve got the obvious rival (a bully), the weaker friend (who runs afoul of that bully) and even the acting Lord Commander, Frostfinger, that dislikes you for no obvious reason. The appearance of Snow to dispense advice doesn’t add a lot, and the combat trial mini games feel like little more than filler. Plus, given the permanent nature of taking “the black,” we’re wondering how they’ll weave this back into the main storyline.

At the centre of it all is House Forrester, and its dwindling influence. For all the branching paths, it’s pretty clear this is what Game of Thrones will ultimately come down to — your ability to re-establish the house’s stature, how you go about doing it and what you do when you get it. And for all the brushes with well-known characters, it’s obvious that the Whitehills are the ones in your crosshairs. They show up again in The Lost Lords to remind you just how villainous they are, and we’ll admit we’re already looking forward to getting all Valar Morghulis on them.

The Lost Lords pushes storylines forward incrementally and helps to clarify the big picture of what’s at stake, which could be a blessing in future installments. Viewed exclusively as a standalone, however, it’s lacking any particularly memorable moments.

By HC Green
Tags: Game of Thrones
This entry was posted on Tuesday, February 3rd, 2015 at 7:46 pm and is filed under Herija Green, Video Game Reviews. You can follow any responses to this entry through the RSS 2.0 feed. Both comments and pings are currently closed.