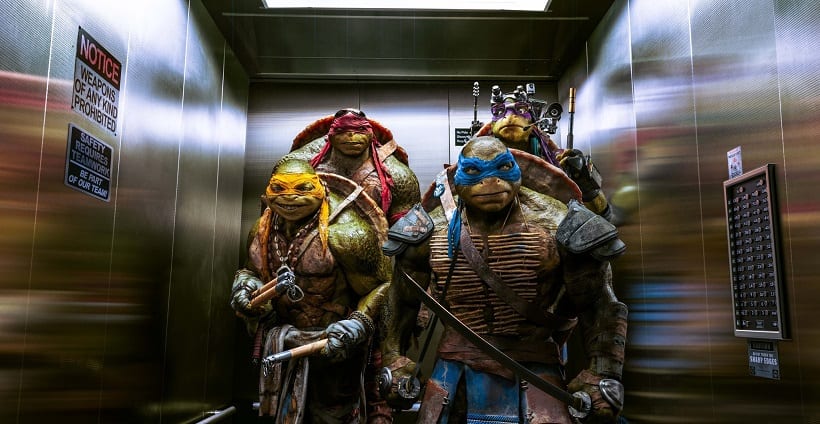 Does Donatello really need to be wearing glasses?

There have always been two versions of the Teenage Mutant Ninja Turtles: the original, gritty edition from creators Kevin Eastman and Peter Laird, and the wise-cracking, pizza-centric group that appeared in the long-running television series. It’s the former that we gravitated toward in our formative years, but it’s the latter that is more well known. As such it’s no surprise that Michael Bay’s film of the same name takes its cues from the show, including the turtles’ personalities and colour scheme.

Bay’s efforts with the Transformers, another childhood favourite, have been uneven so we were curious to see what he could do with the heroes in a half shell.

While the broad strokes of the turtles’ origin have been retained — a leaked mutagen covers the four turtles, who are then raised and trained in the sewers by their rat father/sensei Splinter — many of the details are different. This includes the introduction of a new villain, Eric Sacks (played by William Fichtner), who bioengineered the mutagen along with the deceased father of news reporter April O’Neil (Megan Fox), as well as the omission of Hamato Yoshi, the rival of Oroku Saki (AKA Shredder) and master of Splinter.

If you’re new to the franchise these changes won’t mean anything. As one-time fans that read a lot of comics and watched plenty of the cartoons, we didn’t care for them. Granted, attempting to apply logic to a film about ninja reptiles sounds like a pointless endeavor, but we have an easier time with the back story of Splinter learning the art of ninjutsu from watching Yoshi than we do with him finding a book in the sewers. Plus, without that, there’s no issue between Splinter and Saki — not to mention that they don’t explain Saki’s scars (given to him by Splinter in the comics).

Getting back to the storyline, we follow O’Neil, a young reporter doing puff pieces, as she tries to land a serious story about the criminal organization The Foot, which operates in anything but secrecy here. After stumbling upon a heist, she bears witness (sort of) to “vigilantes” fighting back and thwarting The Foot’s efforts. Through further investigation she learns that the crime fighters are mutated turtles, and in fact are the same turtles she saved from a laboratory fire as a child.

She shares her discovery with Sacks, who she trusts from his years working with her father, but he wants to capture them to recover the mutagen from their blood. What follows is a lengthy series of fights and escapes with Sacks and Shredder attempting to unleash a chemical attack on New York, only to “save it” with the extracted mutagen, and the turtles and April trying to stop them.

Special effects have come a long way since the 1990 live-action film, which featured actors in costumes combined with puppeteering to bring the turtles to life. Now, all four are computer generated, and for the most part they look really good. Some of the superfluous detail work, like Michelangelo having a pair of shades dangling from his neck whilst doing tons of acrobatics, feels really silly, but the quality of the CGI is definitely among the movie’s highlights.

Will Arnett is likeable in his turn as Vern Fenwick, April’s cameraman, injecting the kind of levity and humour that fell so flat in Bay’s most recent Transformers film. There’s also plenty of little nods to fans of the canon with insider one-liners — “Tonight I dine on turtle soup.”

Although the turtles look good, Splinter looks like a bizarre cartoon, and any time he’s on the screen the movie loses all semblance of realism — he just looks computer generated. Shredder doesn’t have much of a role, taking a backseat to Sacks, and the actor playing him seems like he’s doing a bad Ken Watanabe impression. Fox is a questionable choice as well, given her prominent role in Bay’s Transformers series. She’s not bad per se, but she doesn’t seem like a reporter, either.

As noted, some of the liberties taken with the origin story are likely to rub fans the wrong way. It feels completely unnecessary to have O’Neil’s father be behind the mutagen, and her saving the turtles from the lab fire as a child only to dump them down the sewer is a head scratcher. They also go over the top with the personalities of Michelangelo and Donatello — Donatello is smart, so he wears glasses… uh, what? — and as such we enjoyed the movie much more when it centred on Leonardo or Raphael, who are more serious.

Perhaps the film’s low point is the endless escape from Sacks’ estate. Not only does it go on forever, it also features an absurd amount of CGI action that’s so heavily scripted that it never feels like anyone is in any kind of real danger. Put it this way, Peter Jackson, whose barrel riding scene in The Desolation of Smaug might have set the standard for absurd CGI action, would’ve told Bay to dial it back a few notches here.

There are some fun moments in Bay’s reboot of Teenage Mutant Ninja Turtles, but they’re scattered throughout a frustratingly vapid story, underdeveloped characters and over-the-top CGI. Let’s hope that a tighter story and more believable action await us in 2016’s sequel.

By Herija Green
Tags: Teenage Mutant Ninja Turtles
This entry was posted on Monday, December 29th, 2014 at 1:33 am and is filed under Herija Green, Movie Reviews. You can follow any responses to this entry through the RSS 2.0 feed. Both comments and pings are currently closed.