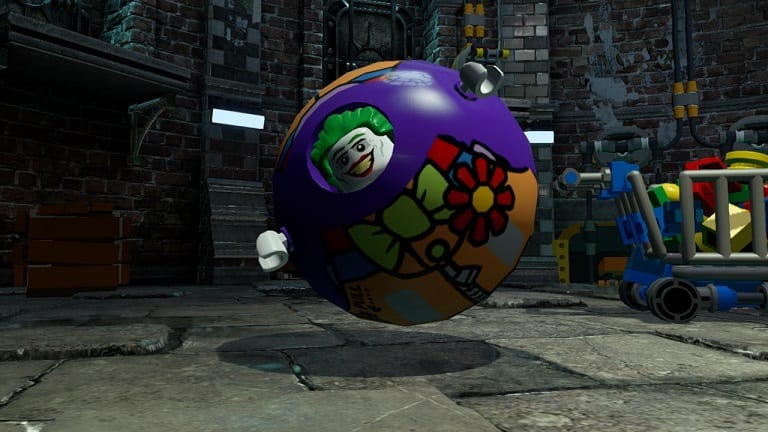 Joker says you’ll have a ball playing Beyond Gotham.

While you can credit Christopher Nolan for breathing life back into the Dark Knight and giving it a much darker, more modern tone, LEGO’s version of the Caped Crusader remains tongue-in-cheek. This is once again on full display with Warner Brothers’ latest LEGO title, LEGO Batman 3: Beyond Gotham, which adds a who’s who of DC Comics’ universe for another brick-filled ride.

If you’ve played previous LEGO titles you should be well versed in how they handle. If not, it shouldn’t take more than a few minutes to get acquainted with the four basic commands: attack, jump, switch characters and interact with objects. It’s not always as responsive as it should be, particularly how finicky the game is with its environmental prompts, but it’s rare that the controls get in the way. That being said, the inability to move while targeting remains a notable limitation.

Considering that Beyond Gotham wasn’t taxing the graphical capabilities of the Xbox 360 we reviewed it on, it’s hard to imagine the next-gen versions look markedly better. The strength of the series has always been the way LEGO bricks are used to create environments — whether real or imagined — and then have the adorable, colourful mini-figs interact with them. It’s no different here, and smashing said objects into a shower of bricks never gets old. It’s a much larger world this time around, too, which gives the game tons of variety.

There’s plenty of recognizable tunes during Batman 3, and the accompanying sound effects that have come to be associated with LEGO games are out in full force as well. The real highlight, however, is the voice acting and dialogue. Even with an expanded cast, the quality remains high throughout, and many of the interactions are endearing.

It should be noted that, although it’s titled LEGO Batman 3, you’d be hard pressed to say that this is truly a Batman game. Sure, it starts with him and Robin, but then it quickly expands to include the likes of Superman, Joker, Lex Luthor, Wonder Woman and The Flash (just to name a few).

Earth will need all of these heroes (and villains) to combat the threat of Brainiac, who has captured the entire Lantern Corps and is now headed to our home world with the intention of acquiring the Green Lantern and then miniaturizing the planet itself. It’s a story that holds up well across the game’s 15 chapters with funny interactions as the characters take on non-traditional roles.

LEGO’s formula hasn’t changed much over the years, so you can expect to do a lot of destroying and reassembling blocks to advance through the levels. In many instances, puzzles require a specific character in a specific suit to solve, though occasionally you’ll have multiple party members with a given ability — such as firing lasers or increasing in size to move heavier objects — and the game is pretty generous in providing the solutions.

By which we mean a small circle with the needed character will appear, along with the prompt to switch to them, when you approach an object. If you’ve got the proper character but the wrong suit, another button prompt will appear and automatically equip the needed suit. It makes puzzle solving very simplistic, though in a game for all ages you’ve got to expect some hand holding.

In addition to the usual smash-rebuild-advance mechanic, Beyond Gotham also features a handful of different mini games. The most interesting of which is the Resogun-esque ship battles that have you fighting other craft and collecting power ups in a circular battleground. There’s also some quick time events and a hacking mini game that feels like you’ve entered the world of Tron. They’re fine for what they are and do help mix things up during the campaign.

Collecting and unlocking loads of content has long been one of the LEGO series’ top draws, and on that front Batman 3 features an embarrassment of riches. There is a ton of characters to unlock, hidden items to find (including rescuing Adam West, the original Batman), bricks to hoard and inside jokes to the DC universe to uncover — and that’s written as someone that’s hardly a denizen of the comics, so those that are better versed in the fiction should get even more out of it.

It’s hard not to have fun with LEGO Batman 3: Beyond Gotham, but, as noted, very little has changed with the franchise’s approach to gameplay. If you’re still enjoying that formula there’s no reason not to add this to your collection as it offers an entertaining story, a diverse cast and enough content to keep you busy for weeks, if not longer.

By Herija Green
Tags: Christopher Nolan
This entry was posted on Monday, December 22nd, 2014 at 2:32 pm and is filed under Herija Green, Video Game Reviews. You can follow any responses to this entry through the RSS 2.0 feed. Both comments and pings are currently closed.