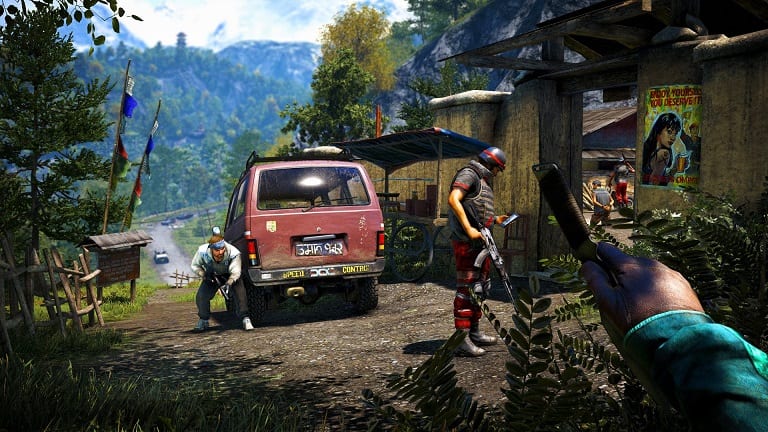 Far Cry has always been a series that took brandy in its coffee while parasailing down a waterfall, and our brand new journey into the Himalayas is no exception. Far Cry 4 drops you into Kyrat, a land trying to heal itself after the population was torn apart in a cold, violent war. You are the very able-bodied Ajay Ghale, a hero’s son returning home to continue the work of his father: fix the evils of dictator/king Pagan Min, and liberate the citizens of Kyrat.

Far Cry 4 has a lot going on, and — as with its predecessors — it prides itself in being an exceedingly immersive hands-on experience. Whether you are running through the brush trying to avoid a falcon pecking at your neck or riding an elephant through an enemy convoy, the controls are precise and provide immediate onscreen feedback.

Anyone familiar with standard FPS control schemes will feel right at home here, with your sticks governing movement and look direction and triggers assigned to aiming down sights and firing. Ducking and jumping are invaluable, and thankfully it’s very hard to get hung up on the environment; Ajay gets around very well.

Driving, at first, feels clumsy and underwhelming in contrast to former titles because accelerating, braking and turning all with the same stick feels bad. To compensate for the awkwardness of driving, high-speed firefights are something that can now be comfortably done. Gone are the days of careening off the road as you spray bullets at your opponents’ tires and bumper. While driving, click the left stick to initiate Auto-Drive and take a nice shot at an enemy’s dome instead.

On the PlayStation 4 system, using the touchpad to select weapons (rather than using L1 to bring up the wheel and the stick to select) can lead to some unintentional weapon swaps when trying to access the map (press the touchpad down).

Damn, damn, damn. Kyrat is a beautiful region. Snowcapped mountains bed themselves in the distance, with a nice wispy stream of purple and red clouds flowing between them. You’re too busy to notice, though, because a tiger you can literally count the teeth on is attempting to rip you to in two.

Kyrat is not only home to the natives and tigers, but also a wealth of other forms of wildlife like truly scary carnivorous fish to thundering rhinos grazing in one of the many lush fields. Even everyone’s favourite, the honey badger, makes an appearance (again and again, barking and scaring the hell out of you). All of these wildlife look great from a distance and even better up close — they all have a nice fur shade applied to them to give off a warm and fuzzy look.

People in Kyrat are varied and detailed as well, and they boast slick animations in any given scenario… which, to be honest, mostly involve nice thick explosions and plenty of bullets.

From the rocks shifting beneath your tires or the call of a hungry pack of Dholes, the aural experience of Far Cry 4 is outstanding. If you’re wearing headphones you can close your eyes and practically trick your mind into thinking that you’re in a forest at 8,500 metres — you can almost hear the air about to freeze. Some of the guns unfortunately sound a little bit puny, but that’s the only X on my checklist here.

As stated above, Far Cry 4 is a very immersive experience. Not once does the camera break first-person — you are Ajay Ghale, and Ajay is a damn busy guy. Besides the main campaign, the expansive list of activities can be pretty daunting at first. For anyone who has to absolutely accomplish every little thing there’s a lot here to keep busy with, like hunting assignments and assassination contracts, hidden treasures, relics and propaganda.

Ajay’s top priority, however, lies with the Golden Path, a movement started by his father during Kyrat’s recent civil war. Pagan Min, the disputed King of Kyrat, seeks to rule the land and simply have immature, carefree fun. This, of course, leaves a large portion of the population destitute. To rectify this imbalance of power, Ajay takes it upon himself to ride elephants and hang-glide to glory.

Shooting mechanics in the Far Cry series have improved with every installment, and even though Far Cry 3 had it nearly perfect, the latest is the greatest. Ranged combat is extremely engaging with the snap-cover system, and the melee/takedown system is fun and easy to employ.

Different types of missions also test different types of skill sets, so a hunting mission will reward a steady hand and patient mind, whereas a clever Ajay might put a row of mines on the route of a convoy, but ultimately the options are many. Sometimes you’ll run into a mission that absolutely, positively has to be done a certain way, but the game excels in letting players figure out their own way to lead Ajay to victory.

Also returning from Far Cry 3 is the map editor, so you’re immediately free to throw together your own Deathmatch map or Outpost Challenge. Adversarial isn’t the only way to go with multiplayer though, as Far Cry 4 is a great co-op environment, so you really never have to be alone in Kyrat if you don’t want to.

Not only is Ajay a much more likeable character than Far Cry 3’s Jason Brody, but Kyrat itself just has more draw to it. Every cliffside, plain and village just feels perfectly embedded into the world. Far Cry 4, simply put, is just more of everything we liked from 3 but with a lot less whiny spring breakers. The Golden Path is waiting for you, you just need to take the first step and make sure you can keep up with Ajay.

By Jeff Cater
Tags: Far Cry
This entry was posted on Thursday, December 18th, 2014 at 1:59 am and is filed under Jeff Cater, Video Game Reviews. You can follow any responses to this entry through the RSS 2.0 feed. Both comments and pings are currently closed.