The Wire Troll: Jason Zucker Lighting the Lamp for Minny 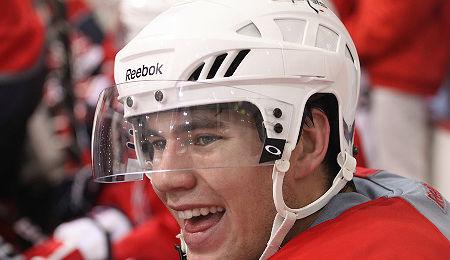 Tom Wilson has returned from the AHL with a vengeance. (Chris Gordon)

Week Seven offered some interesting developments in Fantasy hockey. For probably the first time this season, all the major contributors for the week were established veteranss in both the real and Fantasy sense. However, we’ve found a few we think you might be interested in.

Tom Wilson, RW, Washington Capitals (ESPN: 1 per cent; CBS: 14 per cent): After a brief two-game stint with the AHL’s Hershey Bears, Wilson is back with the Caps and had a very solid week, scoring a goal and two points with a plus-1 rating, 27 penalty minutes, seven shots on goal, six hits and one block. In 13 games this season, he has two goals, five points, a minus-3 rating and 24 shots on goal. He’s not going to be a major source of points, but he’ll be a big contributor in leagues in which penalty minutes (see video below) and hits are regular stat categories.

Blake Comeau, LW, Pittsburgh Penguins (ESPN: 16.5 per cent; CBS: 40 per cent): In his first season with the Pens, Comeau is on nearly on track for a career-best 30-goal season. In Week Seven, he had three goals, four points, a plus-1 rating, four penalty minutes, one game-winning goal, 15 shots on goal, 13 hits and a blocked shot. Through 22 games, Comeau has eight goals, 14 points, a plus-5 rating and 42 shots on goal.

Brandon Prust, LW, Montreal Canadiens (ESPN: 0.9 per cent; CBS: 11 per cent): Prust has just one goal and six points in 25 games this season, but his 62 penalty minutes and 30 hits do have him ranked 203rd according to Yahoo.

Jason Zucker, LW, Minnesota Wild (ESPN: 4.5 per cent; CBS: 15 per cent): After years of seeing time both with Minnesota and its minor league affiliate, it certainly looks like Zucker is in St. Paul to stay. In four games last week, he posted three goals, four points, an even plus-minus rating, two penalty minutes, 14 shots on goal, three hits and a blocked shot. With nine goals and 12 points in 23 games played, Zucker is currently on pace for 30 goals or more… and that’s behind teammate Nino Niederreiter, who could hit 40 or more if he keeps up his current pace.

Alex Tanguay, LW/RW, Colorado Avalanche (ESPN: 24.6 per cent; CBS: 33 per cent): Often injured, the now healthy Tanguay should be on your radar. He had a pretty solid Week Seven, scoring a goal and four points with two power play points, a game-winning goal, eight shots on goal and a block. In 22 games played this season, Tanguay has eight goals, 15 points, a plus-1 rating and 36 shots on goal.

No. 1. Ryan Miller, G, Vancouver Canucks: Miller appears to be finding his game with the ‘Nucks. In three starts last week, the former Olympian collected three wins, a 0.33 goals against average, a .987 save percentage and two shutouts. Not bad by a long stretch, and that’s why he’s our No. 1 Stud of the Week.

No. 2. Karri Ramo, G, Calgary Flames: The Flames have had a very surprising start to the season, and that should continue if their goalies continue to perform well. Ramo pitched a perfect two games last week, stopping all 58 shots faced for a 1.000 save percentage and two shutouts.

No. 3. Sidney Crosby, C, Pittsburgh Penguins: Sid the Kid had a great week as well, notching a goal, seven points, a plus-2 rating, 14 penalty minutes, two power play points, 11 shots on goal, 54 face-offs won, three hits and a blocked shot. We’re happy he’s on our Fantasy team; we just wish it was in a league with more statistical categories so a week like he had would have made more of an impact.

As you can already tell, this week’s “S&D” segment is a goalie filled issue, and our “Duds” segment is no different.

No. 1. Darcy Kuemper, G, Minnesota Wild: Like his team, Kuemper has had some issues after a solid showing out of the gate to start the 2014-15 season. Last week, the hulking netminder managed just one win to go with a 5.86 goals against average and a .855 save percentage. Regardless, he’s still Yahoo’s 83rd best Fantasy player of the season with 10 wins, a 2.37 goals against average, a .911 save percentage and three shutouts.

No. 2. Dustin Tokarski, G, Montreal Canadiens: Montreal’s backup didn’t fare much better with no wins, a 3.85 goals against average and a .867 save percentage in two appearances last week.

No. 3. Frederik Andersen, G, Anaheim Ducks: Andersen’s numbers are little better (3.21 goals against average, .906 save percentage), but he does have two wins to his credit on the week.

And that wraps up our coverage of Week Seven; we know how we did, but how did you fare? Tell us in the comments section below.

By Dakota Case
Tags: Tom Wilson
This entry was posted on Sunday, November 30th, 2014 at 8:54 pm and is filed under Dakota Case, HOCKEY, The Wire Troll. You can follow any responses to this entry through the RSS 2.0 feed. Both comments and pings are currently closed.