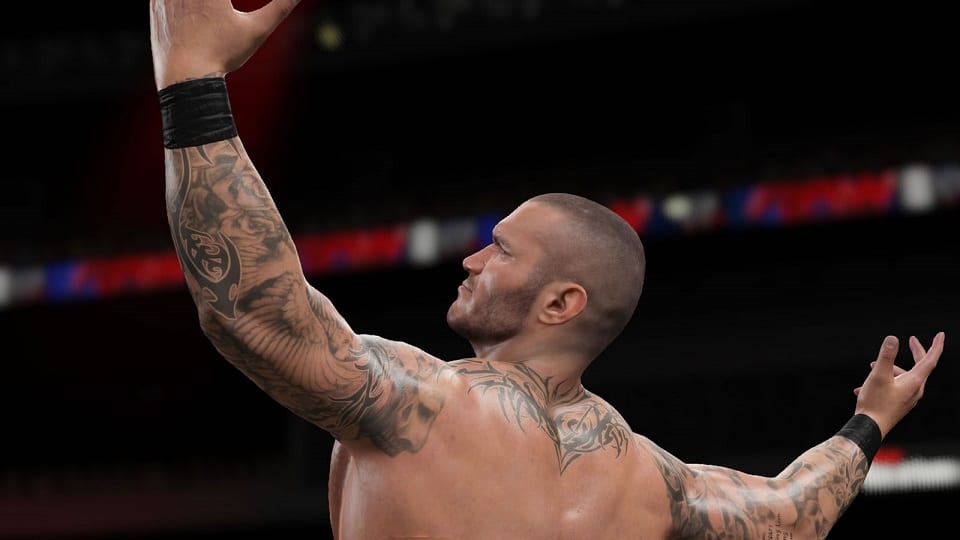 Hey, it’s The Viper! Now then, where’s The Mountain?

It’s been a trying year for World Wrestling Entertainment. It brought Batista back as a conquering hero only to watch fans react so negatively to it that Batista was turned heel and perennial underdog Daniel Bryan won the belt — only to get injured shortly after WrestleMania. CM Punk departed, Boo-tista cut his return short, Roman Reigns got hurt and Brock Lesnar put the WWE Championship into a months-long sleeper hold. Other than that, Mrs. Lincoln…

Perhaps bigger than all of that, however, was the WWE’s decision to abandon its long-standing pay-per-view business model to launch the WWE Network (it costs US$9.99/month, in case you didn’t know), which hasn’t quite gained the traction it had hoped. What’s the common thread? Change. So it seems only fitting that 2k is making some notable alterations of its own with WWE 2k15. Now it’s time to find out how well those changes hold up.

In an effort to more accurately simulate the structure of WWE matches, Visual Concepts (along with long-time developer Yuke’s) has slowed the action considerably. Strikes are thrown at a more ponderous pace — reducing strike spamming — and wrestlers slow as they take damage and lose stamina. The result, for better or worse, is more deliberate matches. At times it’s very cool, while at others it feels like action slows too dramatically and turns late-match scenarios into a slog.

Early on in matches you’re treated to the new chain wrestling mechanic. This is designed to replicate the neutral collar-and-elbow tie-ups that often occur during the feeling out process. The initial advantage is determined in rock-paper-scissors fashion, and from there you and your opponent will rotate the right analog stick until the blue circle turns red and starts to fill. Whoever does this successfully initiates the next step and so on. It works fine, though it’s hard not to feel jobbed when the A.I. opponents somehow find the sweet spot immediately several times in a row.

There’s more to track this year as well. The game’s HUD now features two bars, one for health and one for stamina, along with a numerical momentum meter. Health depletes as you take damage, whereas stamina dips and refills, though if you use too much you’ll permanently fall below a threshold, making it tougher to string moves together. Momentum builds with each move or counter. Reach 100 per cent and you can use a signature move. Hit it or reach 150 per cent and you’ll earn a finisher.

Although we’d characterize these changes as a net win for the franchise, there are some kinks to be ironed out. The two biggest: countering is too prevalent on the default settings, allowing the computer to bank scores of momentum despite executing few moves, and stamina drains too quickly, making you either spend a bunch of time waiting for your opponent to stand or wear yourself out.

Oh, and let’s fix cage matches — the escape mini-game is a joke as we lost count of how many time we sat atop the cage, powerless, while the computer climbed up and threw us off.

As you’d suspect, jumping to the Xbox One and PlayStation 4 has been a boon to the graphics. Not only do the wrestlers look better than ever, but they also interact more realistically with fluid animations of moves, counters and strikes — not to mention a lot less wonky physics and bizarre action when coming in contact with the ropes.

It’s jarring then when Punk walks to the ring and looks like he just stepped out of WWE ’12, or when the long-haired version of Triple H appears in the game’s signature single-player mode, 2k Showcase. So, while the reason for the issue is understandable, it doesn’t make it less unpleasant after seeing the high-quality recreations of current stars.

Commentary, long a source of consternation, has finally received some attention with Michael Cole and Jerry “The King” Lawler recording a lot more lines. It’s better, but the caveat is that improvement comes in the scripted modes, so you’ll still hear copious amounts of repetition during MyCareer and Universe matches (and don’t even get us started on the post-match highlights). In-match sounds are solid, while the game’s “curated” soundtrack is really shallow.

MyCareer, a staple of 2kSports’ other series, makes its debut in WWE 2k15. Here you create a wrestler and guide him from NXT (the WWE’s developmental territory) all the way to the flagship show, Monday Night Raw. The appeal here is you get to micromanage their development by customizing movesets, distribute attribute points and even make them face or heel. The downside is that hour after hour is just spent wrestling one vanilla singles match after another with little or no context.

One of Vince McMahon’s famous credos is that, first and foremost, WWE tells stories. Why then does your career exist in a virtual vacuum, devoid of any semblance of a storyline until you’ve invested loads of time — and even then, the stories are hardly compelling. Not only that, but WWE 2k15 didn’t seem to care whether we won or lost, dishing out praise after a 15-second DQ loss that earned a half-star rating from the game. Growing our character convinced us to stick with it, but the mode would absolutely benefit from more context and variety.

On the opposite side of the spectrum is the historically driven 2k Showcase, which focuses on two of WWE’s top feuds: John Cena and CM Punk, and Triple H vs. Shawn Michaels. You’ll get 33 matches between the two rivalries with various other superstars making appearances along the way. It’s a smart move since most feuds have some branching to them, and, to be honest, 33 matches between the same couple of people would get boring.

Matches have optional objectives — use a specific move, reduce your opponent’s health, etc. — that earn in-game awards upon completion. They can also trigger cinematic moments when you’ll be treated to sequences that really happened during the matches you’re recreating. It’s a solid mode, though it’s not nearly as good as WWE 2k14’s WrestleMania retrospective.

While WWE Universe mode returns, there’s been a significant reduction in the creation suite, headlined by the loss of the storyline creator. You also can’t create a title belt, a finisher or a diva, not to mention several match types have been removed, which is especially prevalent in tag and triple threat bouts. Last, but certainly not least, the Xbox One has some lengthy load times that seem to crop up constantly, even when doing something as basic as changing the hair or clothes on your CAW.

Developers of annual releases are frequently chastised for not innovating enough from year to year, so in that sense WWE 2k15 represents a bold move from 2k in trying to change things up. Unfortunately, a lot has fallen by the wayside in the process, and the changes themselves still need some tweaking. Let’s see if it can build on its innovations and beef up the content for WWE 2k16.

By Herija Green
Tags: World Wrestling Entertainment
This entry was posted on Friday, November 28th, 2014 at 3:34 am and is filed under Herija Green, Video Game Reviews, Wrestling. You can follow any responses to this entry through the RSS 2.0 feed. Both comments and pings are currently closed.