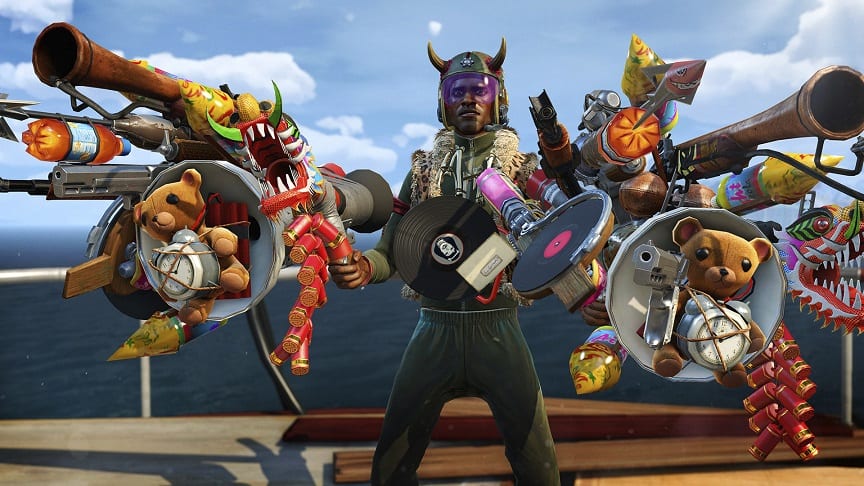 Go ahead… make my day.

Almost a year has passed since Microsoft unleashed the Xbox One, and outside of a flurry at launch there haven’t been a ton of noteworthy exclusives to hit the console. That’s changing, though, as hot on the heels of the excellent Forza Horizons 2 comes Sunset Overdrive from Insomniac Games — best known for its work on long-running PlayStation series, Ratchet & Clank and Resistance. So how does the new collaboration work out? Let’s start grinding (and bouncing) and find out.

With all due respect to the shooting, traversing Sunset City in increasingly stylish fashion is probably the biggest allure of Sunset Overdrive, and Insomniac has done a very good job of making what looks like a complex set of movements on the screen rather simple to execute. Pressing “A” jumps, and “X” allows you to grind rails or run along the sides of walls. Add the right bumper as a booster, and you’re pretty well set to start making your way across the open world.

Don’t confuse the word “simple” with easy, however, as it definitely takes some time to get comfortable with chaining jumps and grinds, transitioning from wire to rails to air vents to buildings and so on. So, if at first you find yourself falling off objects, playing the game like a traditional shooter and wondering what’s special about it, just keep at it. When it clicks, it clicks, and once it does Sunset Overdrive’s fun factor gets cranked up to 11.

Shooting elements are actually fairly simplified, which includes a forgiving aiming reticule, and you’re not asked to pull off headshots while cruising around 20 feet above the action. Holding down the left trigger slows things down a bit, but the game’s leniency is appreciated nonetheless. Instead of looking for precision, the focus is on creating explosive chaos by expanding, augmenting and unleashing your arsenal, often in completely absurd ways.

Outside of the aforementioned learning curve, the only issue of note is occasional troubles with the camera. This generally occurs when scaling larger structures and can cause some confusion, which typically plays out as awkward missed jumps or aborted grind sessions. It’s enough to annoy here and there, but that’s the extent of the damage.

Considering that it was built for next gen, Sunset Overdrive is a little uneven graphically. The character customization would’ve been at home on the Xbox 360 with items fitting and flowing awkwardly — these aren’t Destiny-caliber capes, folks — and unnatural looking hairdos/facial hair. The world of Sunset City fares better, though, with lots of interesting little touches and a strong overall design that allows you to cover massive amounts of terrain with speed and, of course, style.

Where the game truly excels is with its animations, making all those leaps, flips and grinds come across as smooth and effortless. Weapon effects are also first rate, and it’s borderline miraculous that even with explosions, fire, acid, electricity and dozens of enemies all filling the screen, that the frame rate remains steady. It’s something that can get almost dizzying in multiplayer, when up to eight players are all defending one area.

Tongue is planted firmly in cheek throughout so be ready for layer upon snarky, self-referential layer of humour as Insomniac Games demolishes the fourth wall. How much you enjoy that sophomoric approach will likely weigh heavily on whether or not you enjoy the voice acting. It’s mostly good-natured fun and combines with an enjoyable soundtrack for a solid audio experience.

Faceless global conglomerate FizzCo has launched its new energy drink, Overcharge Delirium XT, to the delight of the vapid residents of Sunset City. The good news: it looks delicious. The bad news: it turns anyone that drinks it into a mutant. Recognizing the public relations disaster such an outbreak would cause, FizzCo locks down the city, trapping you and the other survivors with thousands of mutants. Now it’s up to you to get out.

As previously alluded to, the story of Sunset Overdrive is played almost entirely for laughs. Nothing is taken seriously, and the game delights in pointing out how it’s following industry clichés. That approach keeps things feeling light as the challenge elevates — even deaths are treated as mere momentary setbacks accompanied by silly respawn animations. If you string too many story missions together, however, it loses its impact as the humour gets repetitious.

Thankfully, there’s loads to do here, and the game is more about experiencing everything the city has to offer then it is about the narrative. Beyond the campaign missions, you’ve got faction-specific quests to undertake, a tower-defense sub-game, 50 unique challenges, hundreds of collectibles to gather, guns, ridiculous outfits and add-ons to purchase and lots more.

What’ll keep you coming back to Sunset City, though, is the gameplay itself. A progressive combo meter rewards stylish play, enabling high-level augmentations as it builds, and there’s a sense of satisfaction in rapidly transitioning between telephone wires while unleashing your arsenal from above. Each gun can be leveled up to deal more damage as well as supplemented with amps, which provide the weapon with unique properties. You’re seemingly always unlocking something new here.

A hybrid co-operative/competitive multiplayer stretches your gaming dollar even further. Accessed by points on the in-game map, you and up to seven fellow survivors will band together through a series of brief objectives. Each one will have a cumulative goal for the group to reach, but within that you’ll compete to see who contributes the most. At the end, you’ll team up to defend an all-out assault from a massive amount of foes. It’s pure chaos in the best possible sense.

Microsoft’s initial partnership with Insomniac Games is a smashing success. Sunset Overdrive blends shooting and Jet Set Radio style parkour into an exhilarating experience that’s just a blast to play. If you’ve got an Xbox One, you need this game. If you don’t, it’s a good excuse to buy one.

By Herija Green
Tags: Microsoft
This entry was posted on Monday, October 27th, 2014 at 11:10 pm and is filed under Herija Green, Video Game Reviews. You can follow any responses to this entry through the RSS 2.0 feed. Both comments and pings are currently closed.